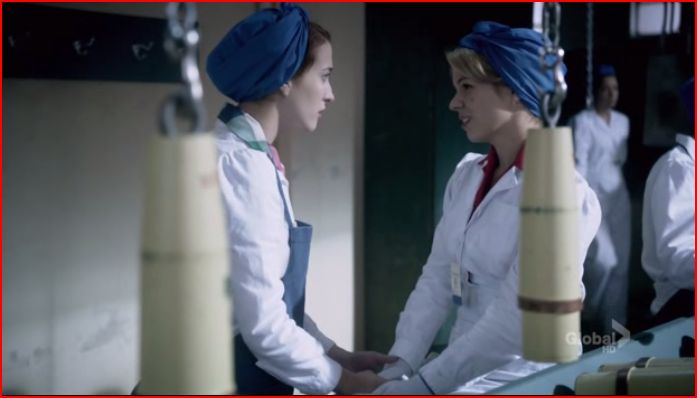 Can you believe it’s the season finale? These past few weeks have been one of the coolest experiences I’ve ever had as a writer what with y’all and your comments.  I look forward to reading them so much and I am fully expecting you to join me in FREAKING OUT about this episode. Also, I’ll be recapping American Horror Story: Asylum starting tomorrow, so if the name Clea DuVall means anything to you, you’ll come along for the ride. And now for the episode with all the feelings.

It’s another fine Canadian morning and something strange is afoot at Witham Castle: Gladys has an interaction with her parents in which neither of them tells her to shut up and look pretty. Seemingly overnight the elder Withams have accepted their daughter’s impetuous nature, and Lady Witham even suggests they “muster a show of support.” Lord Witham slaps his hand on the table, exclaiming “By Jove, you’re right! To the factory with a fruit basket at once!”  He even sort of smiles so I guess there’s LSD in their orange juice or something.

Gladys’ folks aren’t the only storm brewing this morning: at the factory, Lorna becomes suddenly ill and blows chunks in an explosives container.

And we all know what it means when a woman throws up in TV world: Lorna has a bun, or rather a bomb, in the oven.

Vera meanwhile, has decided that if she can’t commit suicide, she’ll do the next best thing and be miserable forever. She’s taking her wig and going home to her family where she can be a recluse in peace. When Betty hears of this plan she vows to “knock some sense into her,” which closely resembles my own medical philosophy of “pop it back into place.”

Back at the factory, Mr. Witham arrives with his fruit basket and spies Gladys on the assembly line.  He charges down, non-regulation shoes be damned. And honestly this storyline has always kind of mystified me, since, hate to break it to you, but if the factory blows up, the secretaries’ lounge will not be miraculously spared.  Also, if you are so concerned with your daughter’s welfare, maybe you could not bang your wedding ring against a bomb with all your might. Lord Witham apparently can’t hear the things I yell at the television though, so he orders Gladys to say her goodbyes. This seems like the confrontation she’s has been waiting her whole life for, and she insists that she has “earned the right to stand with these women.” Rather than hear out what I’m sure is a marvelous speech that she’s been working on since childhood, Lord Witham storms out, and hands the reins over to his wife.

Over at the park, Bob is talking to Edith’s son, who suspects his dad is dead. It should be touching but is easily one of the worst-written scenes of the whole season. Honestly, what kid describes his father’s death as “flying to heaven?”  The kid even dares to wonder “It it because I’m bad?”

At the hospital, Lorna and Betty show up just in time to keep Vera from returning to a life of misery out in Saskatchewan or some such place. Unfortunately they can’t be there to prevent every bad decision, so when Gladys shows up at James’ apartment and suggests they elope, there is only me screaming “GLADYS DON’T DO IT!”

At the boarding house, our dear, sweet Kate is in the tub, which is filled with inexplicably white water, when she gets a Very Bad Feeling. And who should appear but her evil father, who tracked her down via the dirty pictures she took a few weeks ago—which begs the question, why is a man who goes on and on about the dangers of sins pawing through a stack of illicit photos? Anyway, he’s here to drag Kate back to the evangelical hellhole from whence he sprang.  Luckily, Betty has radar that is activated by people creepily referring to their dad as “father” and scares him off.

Also receiving a surprise visitor is Lorna, who gets a late-night call from Lady Witham, who has put down her martini glass long enough to be a real villain this week. She offers to get Lorna’s daughter into med school if Lorna gets Gladys fired. She seems to be on the moral fence about it until the next day, when Vera returns to work. She’s being a very brave be-wigged soldier until Gladys calls her to work with the same hooks that tore off her scalp. This activates some very understandable PTSD and she panics, nearly wounding Betty in the process. In the aftermath, Kate tells Betty that when she saw those projectiles swinging by her head, “my heart stopped” and they touch for longer than I can stand and Betty’s hopes are further inflamed. Because what is she supposed to think: that Kate is just holding her hands and stroking her wrists and sleeping in her bed and dancing with her and staring deep into her eyes and shopping for houses together in a friend way?

The Vera incident and the knowledge of Gladys’ impending elopement is enough for Lorna to give in to lady Witham’s evil machinations.  She passes off her own pregnancy test as Gladys’, which apparently is grounds for dismissal for our poor little rich girl. Lorna suffers a crisis of conscience for this and confesses her pregnancy to Marco, but denies that it is the fruit of his victory garden.  This scene teaches us a lot about Lorna though, such as how she was really looking forward to defining herself as something other than a full-time mother and care-giver, but now she must stay chained to her drab existence.  The next best thing, then, is to throw Gladys under the bus to secure her own daughter’s chance of success.

Down on the floor Gladys is bemoaning her fate when Akins the Rock Eater gets on the loudspeaker with a “very important announcement,” which Gladys immediately assumes is her fake pregnancy. But dear Gladys, something even more important than your drama is taking place: the bombing of Pearl Harbor.
Most of the characters react by staring into space for a melancholy close-up, except for the Morettis who eat spaghetti (I made a rhyme!) and Kate, who sings about her feelings. Right now she’s feeling confused, unsure whether to believe her father’s apologies. I’m going to go with no, since he never actually apologized. Leon tells her that talk is cheap and “it’s a man’s actions you gotta pay attention to,” and Betty eagerly concurs.

It seems that Kate, Leon, and Betty are all buddies now, which pleases me to no end. Betts struts up to the piano bench and sits next to Kate, who starts massaging her shoulders and neck. Kate talks about feeling something and getting the urge to sing, and since she is literally feeling Betty while she says this, Betts takes this as her cue for the Big Moment. She takes Kate’s hand and kisses her palm, in a gesture of heartbreaking tenderness.

Betty says “I really like you Kate” and means “I am so in love with you it’s making me vulnerable for the first time in my life.” And Kate says “I like you too” and means “yep, we should totally get frozen yogurt some time.”

Then Betty takes the biggest risk in the world and leans over and kisses Kate, who pulls away in panic. Betty rushes to cover up her mistake but Kate blurts “That’s disgusting and if you can’t see that then you’re disgusting, too.” And it’s so hard to see a woman with as much strength and hard-won self-assurance have her heart completely broken.

So. The first time I watched this scene, I remember thinking “I wish Heather Hogan were recapping this show so she could make me feel better about this whole business.” Obviously, that’s not things turned out. But even if I’m not as compassionate or articulate as Ms. Hogan, I do have something to say about this scene.

Kissing someone, when your deepest secret and your whole self is written onto that kiss, and when you have no assurance that they will kiss you back, is an act of the greatest bravery. And when it works—when you find something warm and welcoming on the other side—it’s a miracle. It might be the only miracle we all have a shot at experiencing. That’s why our hearts leap even to see actors do it for pretend: because magic gathers around those moments. It’s happened to me. Miracles, though, don’t happen in a vacuum. It takes some good-faith failures to earn a miracle. And sometimes, the person you reach out to is scared, or hung up on someone else, or sometimes, unfortunately, they’re just straight. That’s happened to me too. But this show has done right by us so far. The writers and creators and god bless her, Ali Liebert, have given us Betty, who brings out all our best feelings of admiration and protectiveness. We’re still at the beginning of her story, and I believe that Betty’s miracle is coming.

So now let’s take our broken hearts to Witham Castle, where James has enlisted as a soldier. His heart is full of revenge for Pearl Harbor and he can’t wait to come home a hero.

In light of this development, the Withams throw themselves in to the last minute wedding plans, their approval totally taking the fun out of it for Gladys.
Back at the factory, Vera sneaks up on Akins in his office to try and secure a job of the factory floor. He initially refuses, but Vera puts the moves on him.

And now for my favorite part, which is where Lorna magicks Bob’s penis into functionality and rides him like it’s Doctor Strangelove.

I just hope it’s enough to persuade him that the baby is his.

So do you still have some tears left in your eyes after the kiss scene? Well, now it’s time to cry the last few. At the boarding house, it turns out that Kate was freaked out enough by that kiss that she’s going home with her father. Betty, figuring her heart is already pretty well pureed, says “I love you.” Kate’s father hits Betty across the face, securing his place in hell, and Kate says “I don’t want this anymore and I never wanted you.” All the while though, her eyes say “I’m sorry. I’m sorry. I’m lost.”
Oh Kate! Oh Betts! O CANADA!

The next morning James and Gladys decide to put off their nuptials until after the war, thank God. He heads off to the army, but not without giving Gladys his car, which is nearly as redemptive a gift in my eyes as when Beast gave Belle the library. It actually says that James doesn’t just want Gladys to be his; he wants her to be free. So I guess he took some of that LSD too.

Finally at the factory, Gladys and Betts trade scars from the past few days. Gladys agrees to help find Kate and Betty promises to help Gladys get her job back. And in a truly fine parting shot, Betty poses the eternal question of 20th century feminism.

Betty: The big promise, that we might actually get the things we want, what if it’s a lie?
Gladys: We can’t stop trying. Come on, Betts, we’ve got a war to win.

See you next season.