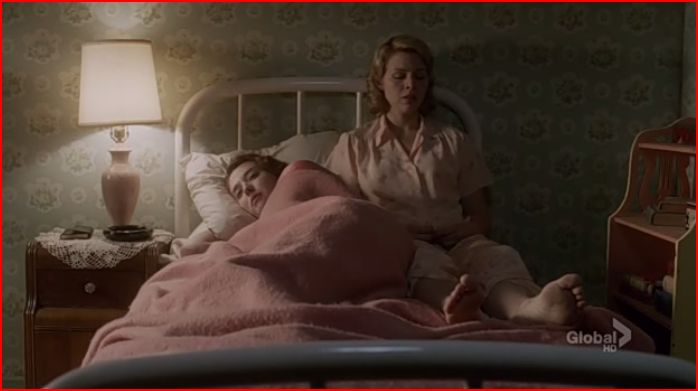 Previously on Bomb Girls, Kate discovered her true calling as a jazz singer, Betty fell even further in love with Kate, Lorna was in full Dark Willow mode and makin’ whoopee with Marco, and Gladys discovered an old trick from Spencer Hastings, which is that if you never sleep, there is totally enough time in the day to be a fearless crusader for justice, a very amusing drunk, and a vixen on the prowl for love.

Propelled by all that action, this is the episode where the tone of Bomb Girls makes a decided change. Up until now this show has been unfailingly polite.  I’m not sure we’ve heard a single raised voice all season, and the strongest language was when Kate said “darn it all to heck” and then probably spent the next three hours punishing herself like a House Elf. Well you can kiss those innocent days goodbye, because here in episode five, shit gets real.

To begin: remember that guy Gladys hooked up with and then promised to marry way back in episode one? Yeah, neither did Gladys, until he sent her 13,000 letters at once, all of which seem to about either her breasts or food. He’s a simple man, is this Louis gent.

Speaking of the menfolk, Marco has come to Lorna’s house to give her some tomatoes and also some sex.  Things are just heating up when a telegram arrives, which obviously concerns one of Lorna’s two sons, who are off at war.

Meanwhile in the hospital, where Archie and Vera have been languishing all season like a pair of consumptives, the realest storyline of the episode is taking place. Two weeks ago, Vera told Archie of her plan to overdose on sleeping pills to avoid returning to the real world in her scarred state. I didn’t say anything about it at the time because I didn’t know what to say. Apparently neither did Archie, who has known about her plan all along and done nothing. At first I was alarmed at Archie’s seeming indifference to her impending demise, but since she has to hoard her pills for a couple of weeks, I guess he figured that was enough time for her to find her own reasons for living. At the moment though, she’s just cracking jokes about it like a really scary standup comic.

Over at Witham Castle, Gladys wants what she has wanted all season: which is some sex, thank you very much.  She and James seemed poised to finally take the plunge, now that his “The Clap” has finally cleared up, when Gladys’ nostrils twitch like a bloodhound’s.

James and Gladys’ father are about to foist thousands of tins of spoiled “pork luncheon” on the Canadian Army. Gladys will not stand for such unpatriotic behavior, and goes all Lysistrata on James, withholding sex until the meat is up to her exacting standards. He tries to make it up to her by hiding a pair of earrings in her underwear drawer, like someone who totally respects her privacy, when he stumbles upon all 130,000,000 of Louis’ letters. Naturally he takes one, having caught the “evidence” bug from Gladys.

When Bob gets home, he and Lorna open the telegram together, only to find that one of their sons has won a medal for bravery. Lorna is filled with pride, but Bob takes a much more cynical view on the “war machine buying off our boys with bits of brass.”  When the factory manager—I finally figured out who he reminds me of and it’s Rock Eater from The Neverending Story—hears about it, he requests that Lorna write a speech to give on Armistice Day, which is what we called Veterans Day back before we forgot about World War One.

This is where things get intense between Lorna and Bob, and also is the first time the war has been seriously discussed more than sober Gladys shaking her fist and crying “damn this war!” or drunk Gladys dancing and crying “this war is the greatest!”  I can’t do any better than the actual dialogue here, so I’m gonna let Lorna speak for herself.

“It’s been twenty-five years since you went over that goddamn trench, Bob. We have raised three children, buried our parents, and somehow managed to keep a roof over our heads, but it’s like none of that ever happened, because you see everything through the lens of a few terrible months you had twenty-five years ago.”

Guys, Meg Tilly and Peter Outerbridge own this scene. Bob is such a crucial counterweight to everyone else’s blind patriotism and keeps the show from an overly simplistic take on the war. But Lorna has been so bottled up until now, each threat a whisper, that to finally see her explode is a thing of beauty.