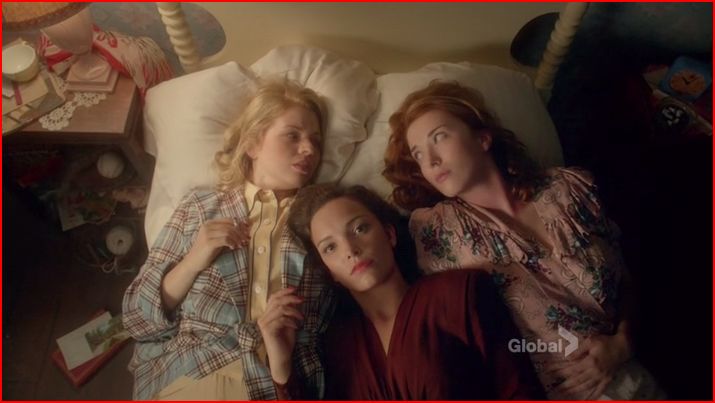 (This recap was originally published on January 4, 2013.)

ave you ever dated someone just so you wouldn’t be single?  I mean, sure she’s nice and cute, but she’s not quite your type.  There just aren’t enough rough edges for you; she won’t even cuss.  But then, the longer you look at her, the more time you spend with her, something happens, and you forget about your “type.”  Then she goes away for a while and there’s this huge, unexpected hole in your life.  And when she finally comes back, and you see her walk out of the airport, your heart starts to race and you realize that somewhere along the way you went and fell in love.  That’s me and Bomb Girls.  Around 11 p.m. last night I was sitting around playing Bejeweled (because I am a grownup and no one can stop me) and I realized I was actually avoiding watching the premiere because I was so nervous about the fates of some of my favorite characters.  But I can honestly say I have rarely been so pleased by an episode of television, or grinned so hard for a solid forty-three minutes.

From the very first shot, of Gladys Witham-Hastings shaking her hips up to a Technicolor display for the benefit of a photographer/humanity, the episode is a shot of joy.  Not only that, the scene is set to actual, honest-to-goodness 1940s music, so clearly Santa exists and I made the nice list this year.

Then we flash to Vera, who’s drawing a stocking seam up her leg with a pencil because she is Vera and she don’t give a damn.  Your scar looks badass Vera and I’m really glad you didn’t kill yourself.

Next at bat, you know her, you love her, the girl with the trousers so high they touch heaven, it’s Beeeeeeeetty McRae! She straightens her hat and her tough exterior and presses a kiss to her photograph of Kate, before going out to get in a quick spot of glowering before work.

In case you were wondering why Gladys was posing for a photographer, other than appealing to every human’s basic need to document her perfection, she has finally persuaded her parents to support the war effort.  It was very easy once she started drugging their orange juice.  Now they’re singing a new tune and it goes “At Witham’s, we’re with ‘em.” She smiles gaily as she breezes off to work, secure in the knowledge that she is finally in her rightful place, all is as it should be, and no one holds any opinions contrary to her own.

When she arrives at the factory, Lorna is giving her “no metal on the floor” speech to a bunch of newbies (which thankfully includes several women of color), while Gladys bemoans the fact that James’ army letters are so thoroughly redacted.  But look on the bright side Glad-y, at least his not actually around to cramp your style.

Speaking of unwelcome letters, Lorna takes Betty aside and shows her a letter from Kate’s father–who has the handwriting of a psychopath–accusing her of being a “deviant freak” who “made improper advances” at his daughter.  Betty assures Lorna that this is a vicious lie, since she has never made anything other than a grade A proper advance on anyone.  Lorna of course believes her star bomb-maker, but Betty is shaken up nonetheless.

Out on the factory floor, Gladys is giving the grand tour to a Chinese officer and his Chinese-American translator, when air raid sirens start blaring.  There’s an unidentified plane flying over the factory, so everyone goes to huddle in the bomb shelter.  Gladys takes the opportunity to get to know Kai Lo, the interpreter, and with five seconds of his gentle humor I already like him more than I ever did James or Whatever.  He also points out some of the atrocities committed by the Japanese against the Chinese in WWII, which ranks very high on my list of under-recognized historical facts.  The thought of dear James falling into enemy hands worries Gladys, so you can be sure there’s another crusade for that loftiest of goals…JUSTICE, on its way.

Meanwhile Ivan Kochinsky cuddles up to Betty and we all get to learn what her “surprised” face looks like.  When the danger turns out to be just a false alarm, a few of the other bomb girls ask if Betty has “staked a claim” on the fresh faced bomb boy.  In an effort to prove her straightness, she announces that indeed she would like to stake him. She even throws her coffee spoon down for emphasis in the most hilariously inept impression of heterosexuality of all time.

When Gladys hears that the two have a date that night she responds with the incredulity of a true friend.

Gladys: “Do you know what any of those things are?”

Then it’s time for drinks at the Corbett residence, glummest home in all Canada.  And by “drinks” I mean “Bob guzzles glass after glass of scotch and wages his endless war against smiles.”  He’s starting to suspect that Lorna has a bun in the oven, and furthermore that it might be a cannoli.  Lorna denies it but knows she has to figure out a plan soon, since not everyone is as unobservant as Bette in season two of TLW (as long as we keep talking about it, it will never die).