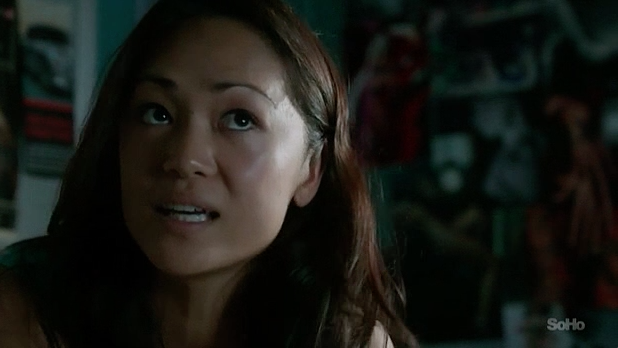 Previously on Wentworth, Bea became obsessed with hemophiliac medication, merely because it seemed it might come in handy for some future nefarious plan. Vera was tired of not being taken seriously by anyone, so she killed her mother, so there would be at least one less person to call her Vinegar Tits. Maxine continued to be a good-intentioned but horribly executed trans character, now sans wig. Doreen found out she was pregnant. But the biggest thing that happened was that Joan essentially admitted to Franky that she killed Simone, but tried to distract her by informing her of the traitor in her midst.

I think we were all afraid that Franky would go all crazy about who had snitched on her and totally ignore the fact that JOAN IS A STRAIGHT UP MURDERER WHO KILLED SIMONE, and that is exactly what happens. She keeps having these recurring nightmares like Harry in the Department of Mysteries, but the only mysteries are which prisoner informed on her and what the fuck Joan’s deal is. It is seriously interfering with her beauty sleep.

The next morning, Bea tries to coax Maxine out of her cell, but she refuses to let anyone see her with her hair cut short.

And while I get what they’re trying to do here, and the guy who plays Maxine is a good actor, I guess. But I continually wish that they had picked an actual trans woman for this role, or at least that they would stop making her whole story about her ability to “pass” as a man or a woman. Just let her be a person, you know?

Okay, so easily the coolest thing going on this episode is Vera. From the moment you first see her, tossing all her mother’s funeral flowers in the garbage, you can tell that she is a changed woman. And Kate Atkinson’s ability to convey Vera’s new strength and severity merely in the way she holds her face is a wonder.

(Also her new demeanor highlights as never before what a strong physical resemblance she has to the actor who played her mother.) And the prisoners can sense her change too; even Boomer is too afraid to do more than whisper “Vinegar Tits.”

Meanwhile, Franky feels her power begin to crumble as her supply of drugs dwindles and the natives grow restless. Desperate to find who informed on her about the Pink Dragon, she sprays the entire cell block with blame, and some lands on everyone. Her first suspect is Doreen, because she is opposed to drugs. But she fervently denies the charges and since she just has one of those faces that can’t lie, Franky moves on.

But not to worry! More suspects abound! Firstly, there’s that new inmate who is super flirty with all the guards. She happens to notice that Doreen is preggers and offers her support because she “loves kids.” She seems nice, but has the off-putting intensity of someone in the throes of an acid trip. Also she stroked Fletch’s stubbly chin in front of Vera, thus making them enemies for life.

Of course, the prime suspect is Bea, who has been an unwilling candidate for top dog since day one. Joan pulls her into her office and tells her that she would back Bea against Frankie and then they could rule Wentworth as a single entity. Bea wonders aloud why every single person in prison thinks she is the messiah, since she only ever accidentally killed Jaqs Holt one time. She’s like Brian in Life of Brian.

While all this intrigue is going on, Liz meets with her parole officer (or whatever kinder, gentler version of them they have in Australia) about her impending release. I keep forgetting about this storyline because I can’t quite believe that Liz will ever taste the free air. She seems much more likely to die or self-destruct first. But whatever; her thing this week is that she is supposed to call her teenaged children but can’t bring herself too, which makes sense because the last time they saw her she was running down granny with a lawnmower. She’s also just trying to figure out the basic logistics of life after prison: how to get a house without an address, or a phone without a phone number. It’s an important narrative, but it’s also familiar to anyone who has ever watched a prison show.