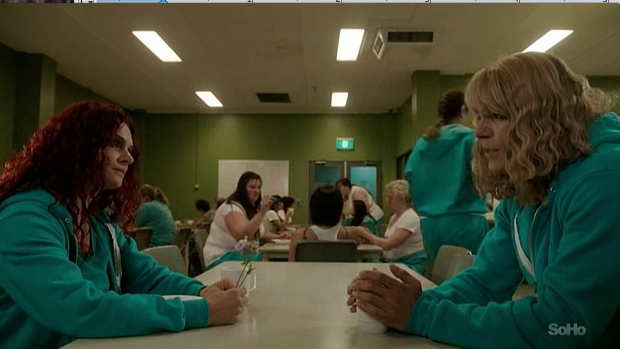 Previously on Wentworth, Governor Joan killed Simone because she was trying to kill Bea because Governor Joan has an endgame that is bigger than any of us. Maxine the transgender inmate used her swinging fists of justice to protect Bea, and Franky was arrested for defending herself against a rapist.

This week, Joan has Doreen’s garden bulldozed as punishment for the prisoners using it as a drug/blowjob exchange program.

No one is more upset about this than Doreen, who lost her project, her boyfriend, and presumably her pet magpie. She visits Franky in her isolation cell to let her know that she blames her for all ninety-nine of her problems. 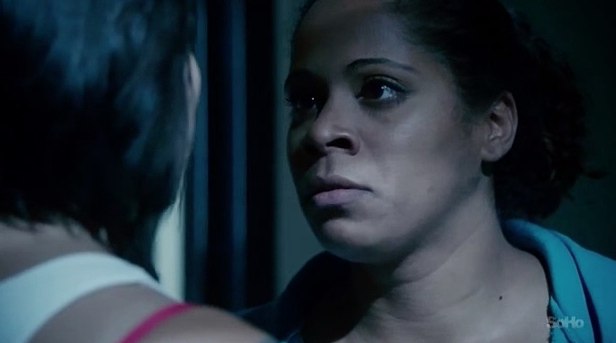 Also this week, Maxine gets her own storyline, which makes me a bit nervous given how poorly her trans identity was handled before. She’s all aflutter because her boyfriend is visiting (the same boyfriend she stabbed with a pair of scissors) and she’s even getting her wig done to celebrate.

While Bea is trying to improve upon Maxine’s ‘do, Franky comes up to offer her condolences about Simone’s death. Bea doesn’t want to hear it, since she found Simone dead with a syringe-full of Franky’s pink heroine still in her arm. When she hears that, Franky’s mental tires screech, because she never actually sold any of the distinctive pink heroine (she was busy stabbing a man in the genitals at the time). Her curiosity piqued, Franky puts her formidable cognitive powers to the test and embarks upon a quest for The Pink Pusher.

Her first stop is Boomer, since she was the one caught with the gear. But of course, Booms would rather die than betray Franky, so Liz points out that Fletch made a beeline for it in Boomer’s cell, almost like he know where it was. Liz is playing a dangerous game here, because he did know where it was because she herself TOLD HIM. Anyway, Liz floats the theory that Fletch has been dealing/using on the side, since has been looking a little scruffier than usual.

This is true; he’s got two days worth of beard growing in and he is more transphobic than ever towards Maxine. He makes her mop up some vomit (which, granted, is within his rights as a prison guard) but then throws the mop handle in her face when she refuses. Vera intercedes, as usual, and tries to repair the damage to Maxine’s face in time for her visitor.

One of the best scenes of the episode is Franky meeting with her attorney over the stabbing incident. It features the fantastic lines:

Franky: It was self-defense.
Attorney: You stuck a garden fork in a man’s genitals.
Franky: Yeah, that’s the bit I was defending myself from.

She quotes like 15 pages of the law at him and then fires him for being an incompetent moron who isn’t even on her side.

In the visitors’ lounge, Maxine searches anxiously for her boyfriend, but instead finds that his brother is here in his stead. The brother, who actually seems like a pretty decent chap, breaks the news that Maxine’s boyfriend is in New Zealand and won’t be back until her trial. She is desperate to see him, since apparently her love for him survived their altercation.

Maxine isn’t the only one getting a visitor; do you guys remember Toni, Kaya’s mom from season one? Well she’s here, looking like an advertisement for Crest Whitestrips™

She’s actually pretty cute now. She’s smuggled in something for Dor, and I know before seeing it that it’s a pregnancy test. Of course, she is pregnant and the other prisoners vow to rally around her and keep the secret, at least until Nash gets out on parole. This storyline would be a lot more interesting if it weren’t copied word for word from OITNB.

While Doreen waits to see if she and Nash have created a baby bird of their very own, we return to Joan’s golden light-bathed fencing lessons.

Some questions about this:

1. Why is the light here different than anywhere else? Has Joan monopolized all the pretty light on the show and left the prisoners with that blue-filtered crap? That would be just like her.
\n2. Who the fuck is this fencing instructor and who are all her silent opponents? Real people? Memories of her father?
\n3. Why do the writers think we need these constant updates on Joan’s state of mind couched in fencing jargon? Why can’t they just tell us a little bit about her actual backstory?

Whatever; today’s lesson is “strike while your opponent is down” which has never been a problem for Joan in the past.

For some reason, she interprets that advice to mean that she should delegate better, and tasks Vera with exposing Franky for running the garden shed drug ring. Vera, of course, takes this new responsibility very much to heart, and rushes home to brag about it to her dying mother. Her mom, however, just gets meaner the sicker she is. Like, last season she hid her nastiness under a the mask of benign church lady, but now that she’s dying she just lets it all hang out. She even dredges up a very painful memory of how Vera’s nickname in elementary school was “stinky pants” because of an unfortunate pee incident during show and tell.

In the laundry, Vera tries to fulfill her duty by just asking Franky, woman-to-woman, if she was smuggling in drugs. Franky tries to pin the whole operation (not just the Pink Dragon) on Fletch, which seems true to Vera since she’s seen him carrying a mysterious white powder lately. In the cafeteria, Maxine finally shares her backstory with Bea.

Her boyfriend paid for her gender reassignment surgeries and said he would love the new her just like the old one. But then she awoke one night to him cutting off her hair, and stabbed him in a haze of panic and confusion. I have a couple of feelings about this. One of which is: thank god that awful wig has finally been explained. It also more generally explains Maxine’s preoccupation with her hair. But also, one of the ways this season suffers in comparison to season one is the lack of flashbacks. They offered a welcome break from the mood and palette of prison life and deepened our understanding and empathy with the women. And I would prefer to see Maxine’s story, rather than just hearing about it.

At any rate, right at that moment, one of the other prisoners starts bleeding profusely. Apparently she is a hemophiliac/possibly European royalty. Maxine and Will both rush to her aid, getting blood on them in the process. They are all rushed to Rose (at last our hot doctor has a name!) in medical to make sure the blood didn’t contaminate them. The whole scene is an excuse for the audience to see Will topless and for Maxine to make off with his discarded clothes. She proceeds to dye his shirt red, for Secret Purposes.

Meanwhile, Vera acts on Franky’s word and orders a search of Fletch’s locker. They do indeed find a white substance, but it turns out to be just protein powder (a substance only slightly less likely than cocaine to turn someone into a complete dick). That night, Vera further unravels when she gets the bad news about Fletch’s protein powders and Joan expresses her severe disappointment in her. As if things couldn’t get any worse, her mom starts screaming like the kid from The Exorcist. I actually applaud Wentworth for showing the ugly side of palliative care, and the extreme toll it takes on the adult children acting as caregivers. And then, as the cherry on top of this shit cake, Vera goes to apologize to Fletch and finds him shacked up with the blonde guard, whose name I have finally learned is Ms. Miles.

The next day, Bea visits the hemophiliac prisoner and hears about the miracle drug that stopped her bleeding. Bea becomes very interested in this medicine, which I bet she will obtain and fake her own suicide or something crazy like that. It turns out that Franky’s narcing on Fletch has some unintended consequences. He vows to go after her and she vows to go after him right back and neither of them realize that they should both being going after Joan, who wants them both ruined. Anyway, all this drama somehow leads to Vera lying in a pool of vinegar while Boomer screams “vinegar tits!” at her. It was a trap set for Fletch, but Vera was the one who fell in. IDK, the whole thing seems pretty stupid and childish.

Like so many plot points this season, it’s like the writers became so attached to the idea of Vera being pushed to the edge that they didn’t care how they got her there. To maximize her humiliation, Maxine then tells her to take some time off and tend to her mother.

While all this is going down, Maxine takes another visit from her boyfriend’s brother. But the whole thing is just a ruse so she can steal is visitors’ badge, don Will’s old uniform, and make a break for the door. The only one who spots her is Vera, who yells at Will to catch her just before she escapes. 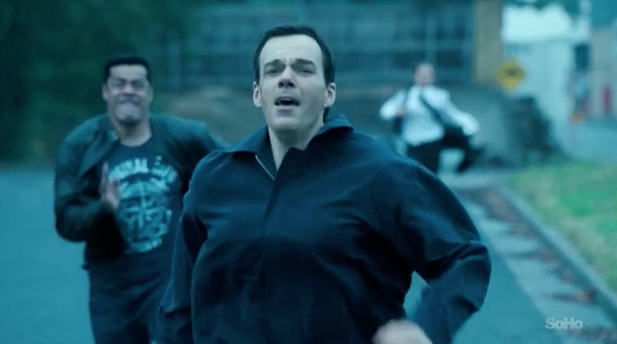 The image of her running—looking just like a man except for the breasts—kind of plays on every stereotype about trans women being just men in disguise, eager to trick unsuspecting cis folks. They stick her in solitary and refuse to give her back her wig.

And, in case you ever doubted her, Franky Doyle has successfully solved the mystery of the pink heroine. She brings the evidence/accusation to Joan. Joan doesn’t even really bother to refute her claims, merely redirects them by asking Franky to puzzle over who told them where the drugs were stashed in the first place. 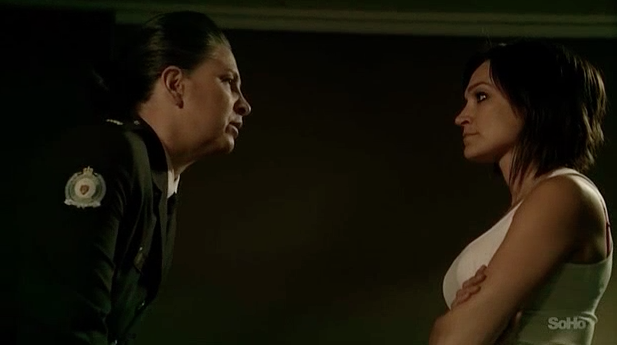 Here’s hoping that Franky will care more about that fact that the governor is a straight-up murder and less about the fact that Liz squealed.

Finally, in a twist we all saw coming, Vera gives her mom about a billion milligrams of morphine, killing her dead and ensuring that no one will ever call her “stinky pants” again. “Vinegar tits” is still fair play though.