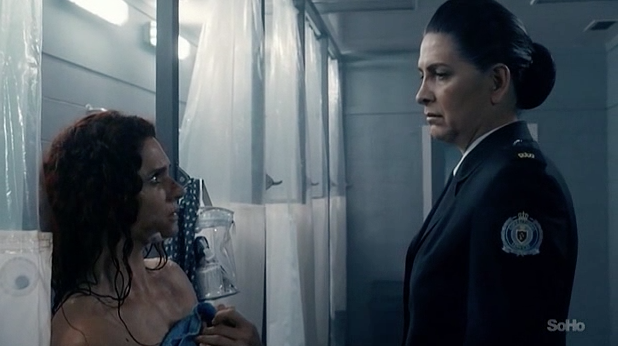 Oh my stars and garters, Wentworth, so that’s where you’ve been hiding. Last night’s episode gave me some of that season one thrill of dreading to watch but being unable to look away. It also upped the ante on intrigue, with nearly everyone running some scheme of their own. We also finally got the low-down on what Joan’s whole psychosis is. Still no word on whether or not the fencing lessons exist outside of her mind, though.

So, previously on Wentworth, Franky and Boomer nearly strung up Bea for narcing on them, only to have Liz confess that it was she who lagged (slagged? lagged?). Liz went into protective custody and Bea decided to finally assume her rightful place as king of Pride Rock. Doreen tried to hide her pregnancy for a urine test, but inadvertently used Maxine’s urine. And Vera vowed to never smile again, a promise she has thus far kept.

This week begins with Joan and Vera entering Doreen’s cell in the dead of night to confront her about her urine. At first she denies any knowledge of how Maxine’s pee got into her cup, but admits to the mix-up when Joan slaps her with a leather-gloved hand. It’s the first time I’ve actually been afraid of Joan. All season, the show has been like “Look out for the new governor, she will glower and Purell you to death” but you haven’t actually seen her cross the line into violence (the Simone murder happened offsceen). Doreen is dragged screaming from her cell, kicking off the most harrowing episode of the season.

This episode also resurrects the flashbacks from season one, which provided vital context and history for the characters as we were first getting to know them. This week takes us back a few years to when Joan Ferguson had the worst haircut since Maxine first donned her wig.

She also had major feelings for a young lady prisoner; the first confirmation that this version of The Freak is as gay as the last one. It’s only subtextual, but she does stroke her hair and call her “special” which is as close to a declaration of love as many lesbians get in their lifetimes. She is snapped out of her recollections by the sound of Doreen’s pee, which confirms that she is indeed with child.

The next day, as part of their plan to rule Wentworth together, Joan moved Bea back to cell block H, which Franky correctly interprets as a power play. However, with Maxine on Bea’s side, there’s not much Franky can do about it except make faces at her.

But the dynamic is about to change. Bea finds Maxine raving and crying because her supply of hormones has been cut off as retaliation for lending her urine to Maxine. Bea gently urges her to ask Franky for the pills, but Maxine is loath to put herself in debt to a woman who recently tried to hang her best friend.

Bea pushes her into Franky’s clutches, clearly because she’s got some ulterior motives going on. In one way, I like this twist because it cleverly ties three disparate plotlines together. Of course, it would be a little more effective if the exact same thing hadn’t happened with Sophia on OITNB.

Ugh, remember Bea’s ex-husband, Harry? I keep thinking we’ve seen the last of that guy but he just comes back like a bad case of eczema. He shows up at the prison, demanding to see Bea just to tell her one more time how much he hates her, but Will is like “the only way you’re getting into my prison is in a teal jumpsuit.” Harry totally loses his shit—never a challenge for Harry—and accuses Will of sleeping with Bea. Everyone, including Hot Nurse Rose, raises their eyebrows at this, since Will and Bea do have some palpable chemistry, but he calmly denies the accusations. Hot Nurse Rose spends most of the episode with hurt feelings over this, until Vera tells her that Will is neither Bea’s lover nor the father of Doreen’s baby.

Meanwhile, Joan grills Doreen about the father of her fetus, but she refuses to talk, even under the threat of further slaps with the leather gloves. Joan dismisses her, orders Vera to figure out who the father is, and slips back into a flashback. In this one, the lovely inmate is revealed to have been pregnant (presumably by Joan’s Feelings). She’s like: “My baby will never have a father.” And Joan is like “Yes it will. I will be the father.” And then they feel the baby kick together and it is precious, but it’s also kind of all we ever get of their relationship. If this is the backstory that is supposed to humanize and motivate Joan, then we should see more of it. As is, we know neither the precise nature of Joan’s feelings nor whether or not they were reciprocated. Hell, we don’t even know this girl’s name.

In other news, Vera asks the blonde guard (her name has eluded me again; she is so desperately forgettable) if Doreen had any unsupervised fraternization with male prisoners. Blondie smirks at her and asks if she’s jealous of her and Fletch. And at that, Vera very nearly breaks her vow of smile-abstinence. Her lip twitches and her eyes sparkle as if to say “You are but a dust mote in the vast universe of my hatred, and my vengeance, and my plans.”

I SHALL DESTROY YOU DESPITE YOUR INSIGNIFICANCE.

Utterly terrified, blondie admits that Doreen and Nash were regularly fucking in the garden shed.

When Harry out of the prison and into the rape van he apparently now drives, he vents his frustration by knocking down Will’s beloved motorbike.

He reports the entire incident, including the accusations of an affair with Bea, to Joan, who is like “Yeah just write that in a full report and I’ll totally back you up because you and I are tight like that and I definitely do not blame you for the death of my one and only love because why would I?”