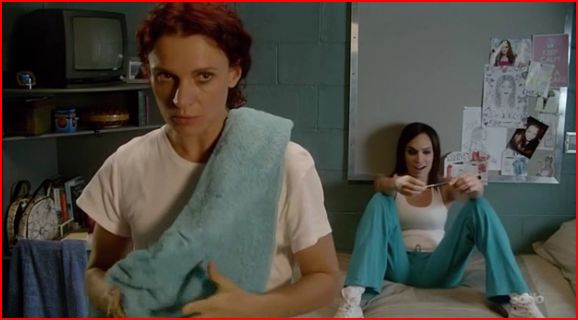 This episode, and one specific scene at the end, is one of the hardest moments of television I have ever watched. It’s just cry-until-you-get-a-headache, draft-angry-letters-to-the-writers, oh-god-there-is-no-justice HARD.

There should be a crisis hotline for this episode. But if you are one of those masochists who like being hurt in the service of a good story, it’s also one of the best.

It’s three weeks since the Rumble in the Jungle Gym, and Jacs is just getting out of the medical wing. Right from the start we know the dynamic has changed; she walks like a deposed pack leader, constantly checking over her shoulder, and when she reaches a flight of stairs, she looks up them with the gaze of a woman afraid she may not have the strength to reach the top. Over at the gym, where Bea and Franky have become exercise buddies, Bea gauges her own recovery from the beating last episode.  It’s a great little moment of parallels, and it is to say: no matter how hard you try, the things that happen in here will change you.  And if you look for them, the whole episode draws visual connections between Jacs and the other women, as if to suggest that any of them are only a twist of fate from becoming just like her.

Up in the governor’s office, Erica offers Jacs the chance to stay in protected custody for the remainder of her sentence, now that the balance of power has shifted. I’m not sure even Jacs believes she can fight her way back to the top, but she’s a shark, and if she doesn’t try then she might as well already be dead.

But Jacs doesn’t know how much things have changed. Specifically, that Bea and Franky have consolidated power, even though Bea is about as confused as C-3P0 when the Ewoks starts worshipping him as a god.  The great thing about this is that, for Australians who watched the original Prisoner series, the name Bea Smith is synonymous with iron-fisted rule. So it’s a fascinating choice to imply that she gained her power, not from sheer ruthlessness, but from seeming like a kinder and more moral alternative to Jacs and Franky. Franky herself is eager to capitalize on and control Bea’s newfound popularity.

Franky: So what do you say we team up and kill Jacs?  We’ll be like Emperor Palpatine and Darth Vader, ruling the galaxy together!

Bea: Didn’t they both die?

As proof of her genuine disinterest in leadership, Bea actually APOLOGIZES to Jacs for her hand getting crushed. Because no one has ever told her that bullies are most dangerous when they feel pitied.

But just because Jacs is down, doesn’t mean she doesn’t still have a few dirty tricks up her sleeve. When Will (whose pendulum has swung back to functional, nice guy this week) inspects her room, she trots out her blackmail about his “cavorting with drug dealers.” He counters that he could tell Bea that young Brayden is cavorting with Debbie, so they’re at a stalemate for now.

Oh and I’m going to get all of Jacs’ flashbacks out of the way in one go, because they are structured as brief scenes scattered throughout the episode (frankly, I think flashbacks are one of the few things at which Orange is The New Black handily beats Wentworth).  Back in the day, when Brayden was but a pint-sized psychopath, Jacs learned of a hit taken out on her husband. So she beat the intended assassin to death with a crowbar—while Vinnie stood aside, refusing to dirty his own hands—and her son witnessed the whole thing. And as much as I hate Brayden, I will concede that incident probably did form a large chunk of his personality.

Speaking of Debbie, we catch up to her at home, which she has treated with the care and respect of a typical 16 year-old in the absence of parental supervision. With her is Brayden Holt, who looks distinctly less boy band cute than he did a few weeks ago. This change is courtesy of his newfound heroin habit.  He’s about to shoot up when Debbie asks to try it herself, which Brayden willingly obliges.

Sensing that something is wrong, Bea calls and calls and calls, but the phone just rings as Debbie lies on the bed, her heart desperately trying to keep up with her.

That evening, Jacs gets another visit from Vinnie, who informs her that he is trading her in for a woman separated from him by thirty years in age, as opposed to fourteen years in prison.  He wants to marry her, which he knows would leave Jacs completely unprotected on the inside. More cornered than ever, Jacs plots a move which will prove that she still has power.