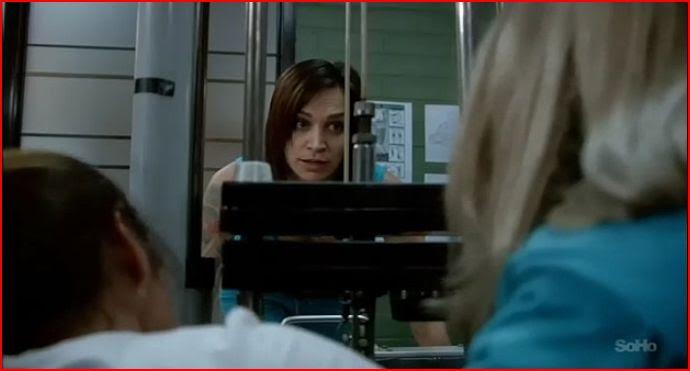 Previously on Wentworth, Jaqs framed Franky for drugs, sending her off for a long stay in the slot. Erica was sad to see her go, but also a bit relieved, since it left her emotionally free to pursue her engagement to her fiancé. Bea was increasingly worried about the state of Debbie’s hair and psyche, but Will was helping her, armed with a newfound stability and altruism. But it is the first law of Will’s personal physics that any movement forwards must be met by an equal and opposite force pushing him back into despair.

This week, Will is drinking and drugging and having sex with a stranger, all the while glaring at his photo of Meg in the most pathetically vengeful way possible. His scenes are shot in this choppy, surreal style that emphasizes his state of mind, which is: tormented.

The next morning, the women are playing hacky sack in the yard, which really detracts from their hardened-criminal mystique for me, when Kim accidentally swats the sack at Will, who steals it. As retaliation, Jaqs–now the undisputed queen of cell block H–has Kim thrown to the ground. She then makes Bea ask her permission before going to retrieve the sack from Will, who throws it down the hall and forces Bea to “fetch.” Jesus, things have really gone downhill since Franky has been in solitary; Will is back on drugs, Jaqs is in charge, and everyone else is playing hacky sack like a bunch of goddamn hippies.

But Franky has not been idle during her time in the slot. No, she’s spent the entire time exercising her boobs arms.

Erica visits Franky to warn her that alliances have shifted during her five week(!) absence, but the only change Franky can see is that Erica is now sporting a diamond engagement ring.  And Erica, darling, when it takes sending someone to solitary confinement for a month to get you to start wearing your ring, that’s a good sign that you are not over her.

Over in Jaqs’ domain,  the perfectly-coiffed matriarch welcomes back a former inmate, Simone, who re-enters Wentworth with the enthusiasm most people reserve for getting out of prison.

Will you stop humming “The Boys Are Back in Town” and take this seriously?

She’s clearly one of Jaqs’ favorites, but when she jokes about Jaqs’ husband and his mistress playing “hammer and tongs” in the back seat of a limo, Jaqs backhands her. (Australians, please tell me you refer to two women doing it as tongs and tongs. Or better yet, tonging.) Once Simone is dismissed, Doreen enters to inform Jaqs that Franky will be leaving the slot tomorrow. Jaqs is like “Tremendous! Let’s assemble the welcoming committee!” And Doreen is like “Are we making her banners and a cake?” And Jaqs is like “No.”

In the guard break room, Vera is enjoying a quiet lunch with Adam when Fletch turns up and tries to flirt with her. She gives him a cordial but cold shoulder, but maybe she just doesn’t want to make plans with him when Adam is sitting right there. Will enters next, but when he starts spewing his hateful bile at Vera, Fletch tells him to step off and get sober.

That night, Bea forces Doreen to spill the beans on what Jaqs has planned for Franky’s release: it’s a gang rape. (For those of you keeping score at home, this means that I am writing about cocaine abuse and gang rape in both the shows I am recapping this week.) Bea and Liz implore Doreen to intervene, but she’s a nurturer, not a fighter.

But, unbeknownst even to herself, Bea is a fighter. Jaqs knew it from the first day they met, when Bea told her to get her own fucking tea. And she also knows that the most dangerous thing in the world is Bea realizing she poses a threat to Jaqs’ power. So it is humbly, peacefully, and horribly naively that Bea goes to Jaqs’ room and asks her to reconsider this act of horrific violence. But the thing is, out of all the broken souls at Wentworth,  Jaqs is the only you could really call a sociopath. You could make a case that Franky actually aspires to being a sociopath, but she does have a small, stubborn conscience living in her heart. But Jaqs doesn’t, and you can’t appeal to the better angels of someone with a devil sitting on each shoulder.

Still furiously tunneling in search of rock bottom is Will, who goes to pick up some more cocaine, and happens to spy Brayden Holt (inheritor of his mothers ruthlessness, smirk, and mysteriously stationary hair) feeding a handful of recreational drugs to Debbie Smith (inheritor of her mother’s beauty and maddeningly trusting nature).

He makes a mental note to put a stop to these shenanigans just as soon as he’s done pounding his own brain into oblivion.