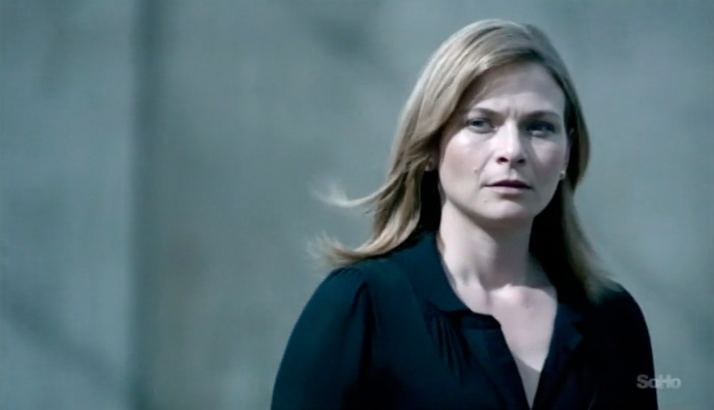 Hello there, cellmates.  After last week’s traumatic episode, we’re overdue for something light, don’t you think?  All the inmates chasing after a magical emu, perhaps.

So maybe Debbie isn’t dead.  She just ODd a little, and it’ll probably teach her a good lesson about the dangers of drugs and boys with gel in their hair.

Like many of you, the first time I saw Debbie fall down on that bed, I thought she might still survive.  I thought the same thing at the end of the Buffy episode “I Was Made to Love You,” which directly precedes “The Body” and ends with a shot of Joyce, pale and lifeless.  I bring up that painful memory because it’s the highest praise I can offer in comparison as a portrayal of grief.  I’d say this one comes in second, only because it is sorely lacking in the “Tara and Willow kissing” department.

This episode begins when Bea is called to the medical wing.  She knows by the guards’ faces that something is wrong, and because Debbie is the only thing she cares about, she knows something is wrong with Debbie.  And when she starts asking questions about her daughter that no one seems to want to answer, she just starts screaming.  And there are no words for this kind of pain.  There are only howls from the bereaved and silence from everyone else.  The normally cool Erica is totally unsure how to behave, Franky’s lip trembles, and Fletch just runs out of the room.  The Fletch thing is actually kind of a big deal, because he is supposed to help restrain Bea as she flails, but something has clearly shaken him up, and he goes to the break room to cool off as the sound of screams still echo in his ears.  It’s clear once he’s alone that the screams are coming from within his own mind.  Vera snaps him out of his reverie like, “Man, it sucks about Bea, right?”  And Fletch is like “It serves her right for breaking the sacred and infallible rule of law.”  And Vera makes that face where you are too into someone to hold an offensive comment against them, but you file it away for future reference.

In the medical wing, Bea has gotten from “animal sounds” to “denial” in the stages of grief.  Erica tells her that Debbie died of a heroin overdose and, horrifically, Bea’s first reaction is relief.  Because Bea’s little girl doesn’t do drugs–certainly not heroin–so they can’t be talking about her.  She calls up Harry to clear up this whole mixup.  Harry is sitting in the kitchen, and even though he is still useless and horrible, I’m glad the show chooses to emphasize his numb, impotent grief, rather than just digging in he knife of how much he sucks.  But the real star of this scene–of the whole episode–is Danielle Cormack.  When she asks Harry “Can I speak to Debbie, please?” it is a perfectly delivered line.  It’s like an iceberg with panic and disbelief and hope at the top, and the knowledge that Debbie really is gone lurking beneath the surface.

In other horrible news, this week sees the return of Derek the prison boss, who has amped up his sleaziness to “guy unironically serenading you with Tom Jones at a karaoke bar.”

Derek: It seems like things have been pretty crazy during your tenure as governor.

Erica: I honestly don’t know what’s going on.  It’s like we’re suddenly part of a TV show or something.

Derek: Also I noticed you’re sporting an engagement ring.  If I’d known you weren’t single, I never would have hired you.  Only joking.  Actually, it’s probably better if you’re married; we can be each other’s little secret, eh?

Erica: HAHAHAHAHAHAHAHAHA.  I’m sorry, but no.  If I’m ever going to be unfaithful to my reliable Toyota of a fiancé, it isn’t going to be with some trashy Lambourghini like you.  Not when there’s a Harley waiting for me in cell block H.

And Erica thinks she just did the right, smart thing, but what she really did was sign the death sentence of her career at Wentworth.