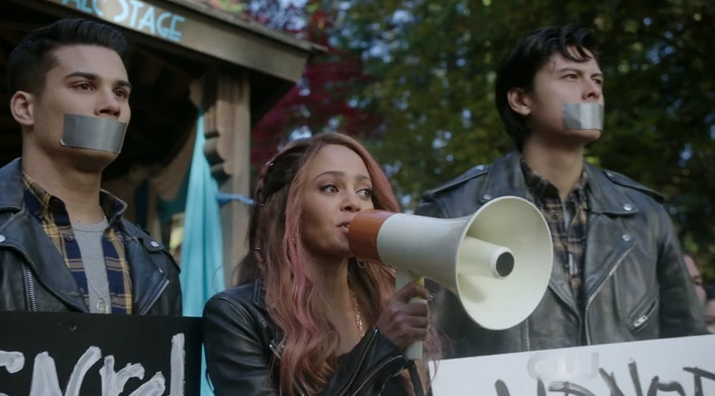 Riverdale. Oh Riverdale. I’m gonna speak for all your fans and ask: how could you do this to us? Do you have any idea how hard it is, going to bat for you? Our friends ask “so what are you watching on TV these days?” and we bravely dive in with “well it’s this really dark, gay take on the Archie comics” and then watch as all respect for us drains from their eyes. I can’t count the number of people I’ve told “No! You really have to give it a chance!” Well, I hope that none of them chose last night’s episode as their test drive, because: woof.

I’m not blaming the actors. You all did amazing, especially Cheryl’s mom. But there’s only so much a team of all-stars can do if the coaching staff spends the game lying on the ground, making imaginary snow angels. (Writers, you are the coaching staff in this metaphor.)

Not a single emotional beat of this episode felt honest or sincere, and that’s saying a lot, given that Riverdale usually prides itself on making hairpin turns and rebooting its main characters several times a season. I mean, this is the show that gave us manhunt couture, jingle jangle, and hinted that magic exists one town over. There aren’t a lot of rules here, but you still can’t break them all at once. It’s like being in the middle of a game of chess and your opponent saying PSYCH, WE’RE PLAYING CHECKERS NOW, AND I JUST WON.

Let’s start with the wrestling. I hate wrestling, partly because of the uniforms that force you to be simultaneously aware of a dude’s nipples and his dick, and also because it’s somehow “disrespectful to the athletes” to scream “GAY GAY THIS IS GAY” the whole time they writhe about on the mat, which is like being at a Scientology meeting and not being allowed to shout “Y’ALL ARE NUTS.”

We are dragged into this most Greek of sports when Special Agent Jared Kushner tells Archie he needs to get closer to Hiram Lodge to learn more about his criminal activities. Two things:

Anyway, Archie learns that Hiram “The Ram” Lodge was a star wrestler in high school, and is now donating a lot of money to Riverdale High’s team so that other young men might have the same character-building experience he did. 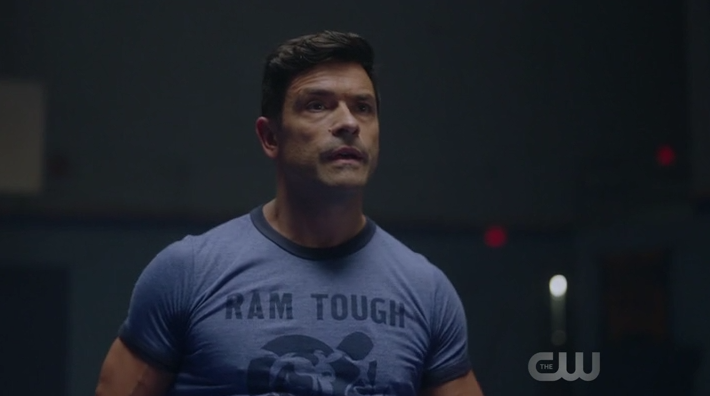 WRESTLING ISN’T ABOUT STRENGTH, IT’S ABOUT WILL. THE WILL NOT TO GET A BONER.

Figuring this is his chance to get closer to Hiram, Archie goes out for tryouts, where he is soundly defeated by Kevin, who has some experience in handling slippery lads. 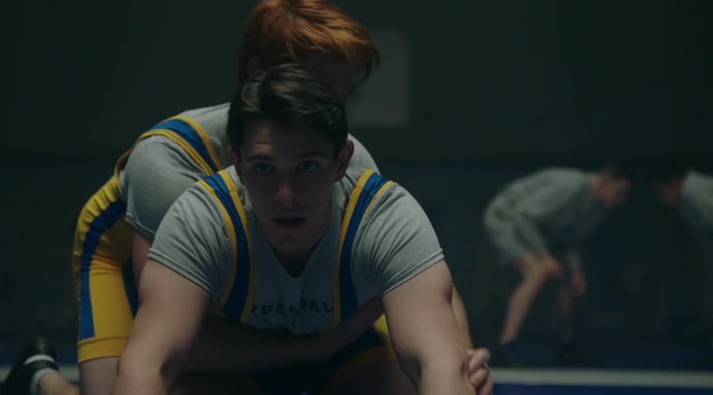 I DEDICATE THIS VICTORY TO ALL POWER BOTTOMS.

You know what these scenes make me think of? Back last year, right before the season one premiere, when Lili Reinhart provoked the ire of queer viewers (and nearly scared me off of recapping this show) by saying that Betty and Veronica would never hook up because this “wasn’t fan fiction.” It’s tough to reconcile that comment–and the glacial pace at which female queerness is being introduced to this show–with this episode, which is the biggest piece of gay male fan service I could imagine, short of a musical episode.

WELL ALL RIGHT THEN.

Hiram is very reluctant to trust Archie, and constantly one-ups him by outrunning him, out-dieting him, and finally just choking him out. 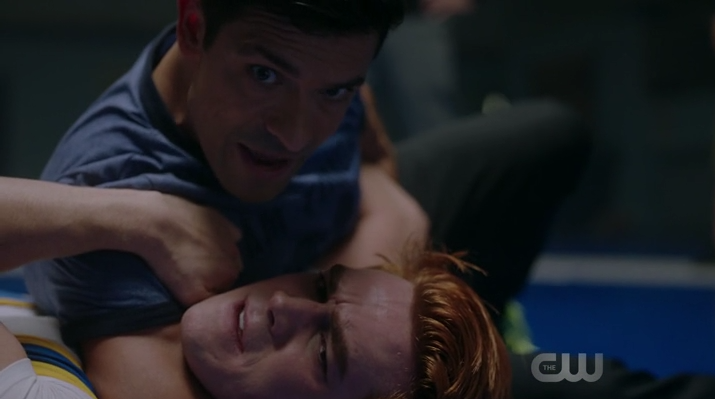 CALL ME BY YOUR NAME, DAMMIT!

Anyway, after tons of sweaty practice and macho posturing, in which Veronica is used as a literal prop, Archie finally earns Hiram’s respect and a position at Lodge Industries. By the end of it all, Archie has put so much energy into making Hiram like him that he seems to have forgotten that he’s supposed to be informing on him. Christ, I never thought I’d say this, but I wish we could go back to focusing on Archie’s music.

Next up on the shit parade, we have the Coopers, who last week welcomed their long-lost son, Chic, into their home, after rescuing him from the Series of Unfortunate Events that had been his life up until then. 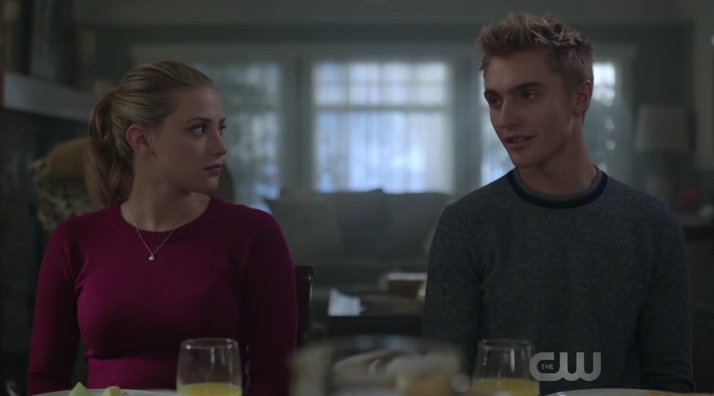 PLEASE DON’T SEND ME BACK TO THE HOSTILE HOSTEL.

Alice Cooper wants to treat Chic like he’s still a child, which is weird, and Hal Cooper wants to treat him like a changeling who was kidnapped by fairies, which is weirder (although understandable, given those cheekbones), but no one’s behavior towards Chic can beat Betty’s for sheer creepiness. She eagerly compares her palm scars to his stab wounds, like they’re in a version of The Parent Trap set in hell. Early in the episode, Kevin tells Betty that he recognizes Chic from his escapades as a “webcam boy.” 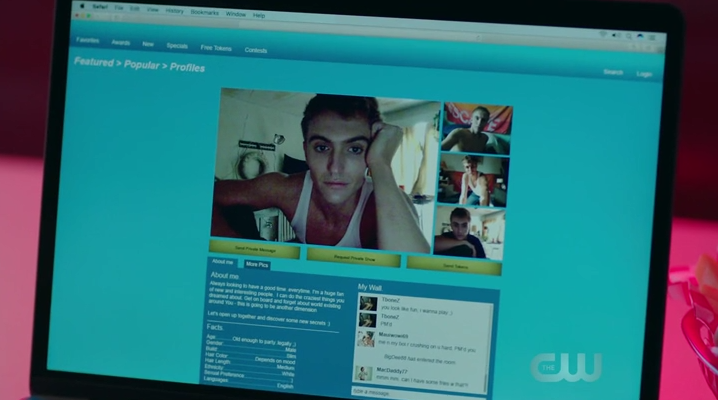 Later, Chic goes back to the hostel to get his laptop and camera–the better to earn his keep in the Cooper home–but his former manager, Marcel, refuses to return them. (I get that this show is stuck with a lot of names from the original comics, but when it has the opportunity to name characters itself, we get a pimp called Marcel.) Betty sweetly/weirdly gives him her old laptop, and confides in Kevin that she has spent a lot of time watching her brother’s work. 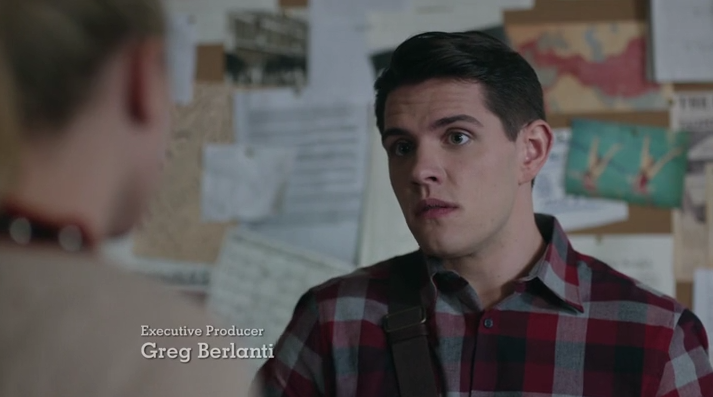 BETTY I LOVE YOU, BUT I GET OFF THE SEX POSITIVITY TRAIN SEVERAL STOPS BEFORE INCEST. TALK TO CHERYL ABOUT THIS STUFF.

Chic later asks Betty why she went so far out of her way to save him, and she gives the strangest answer imaginable: “there’s a darkness in me, and I thought you could help me explore it.” Chic agrees to teach her the ways of web cam-ing, and the two embark on an odyssey that is already making me regret ever wishing for the return of Dark Betty. 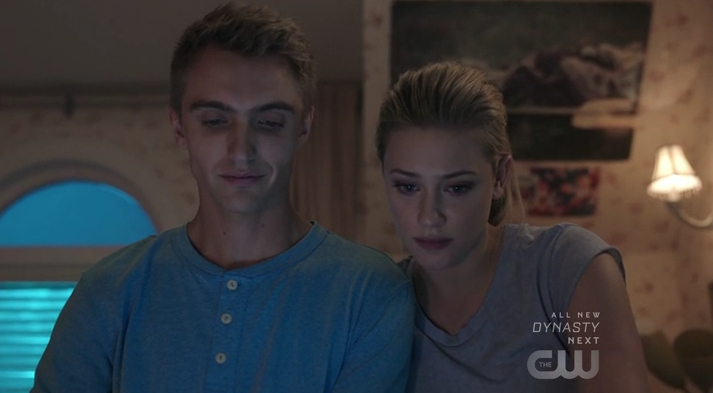 LET’S START WITH SOME LIGHT KYLO REN/REY FAN FIC AND WORK OUR WAY UP FROM THERE.

Finally, this week features a social justice-themed plotline so loaded that just writing about it feels like tap-dancing through a minefield.

This week, Riverdale is celebrating two of its founders: General Augustus Pickens and Colonel Barnabus B. Blossom, Cheryl’s distant ancestor. These two guys are such great examples of Riverdale’s perennial issue with marrying its unbearably twee names with its macabre subject matter. Every week it’s like, “look there’s old Mr. Fuzzybritches!” “You mean old Mr. Fuzzybritches the puppy strangler?”

Anyway, Cheryl is immensely proud of her family’s connection to the town’s early days. Here to impose on her willful ignorance is Jughead, who is still miserable at being back at his old high school and is looking for a way to puncture some more of this town’s wholesome ideas about itself (the few that are left). This journey leads him to interview Toni Topaz’s grandfather, the town’s oldest living Serpent (Graham Greene, who has played probably 80% of all Native American roles for the last 30 years but has never stopped being delightful). 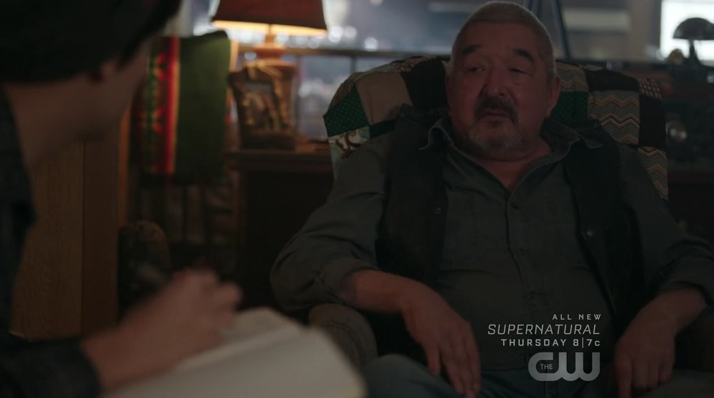 I’M MORE INTO SITTING QUIETLY WITH WOLVES THESE DAYS.

Thomas Topaz reveals that the Serpents originated as a way to pay tribute to the town’s First Nations inhabitants, who were brutally slaughtered at the hands of General Pickens, who himself was on the parole of Colonel Blossom. Jughead gleefully seizes on this story as proof of the town’s original sin, and pens an op-ed in the school newspaper vilifying anyone who dares to hang bunting for Pickens. Toni is upset that Jughead used her family’s personal tragedy as a cudgel in his vendetta against the Northside, solemnly informing him that “it’s not your story to tell.” So on the one hand, she’s right: Jug’s motives are at least partially selfish and he doesn’t treat this issue with the care it deserves. But on the other hand, if you give a reporter a salacious story on the record, you can pretty much count on them to tell it, is how that works. 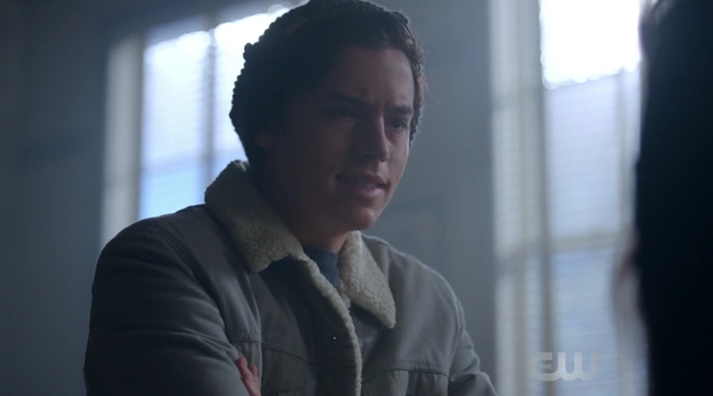 BUT YOU SAID THE TOWN’S HISTORY HAD BEEN WHITEWASHED. 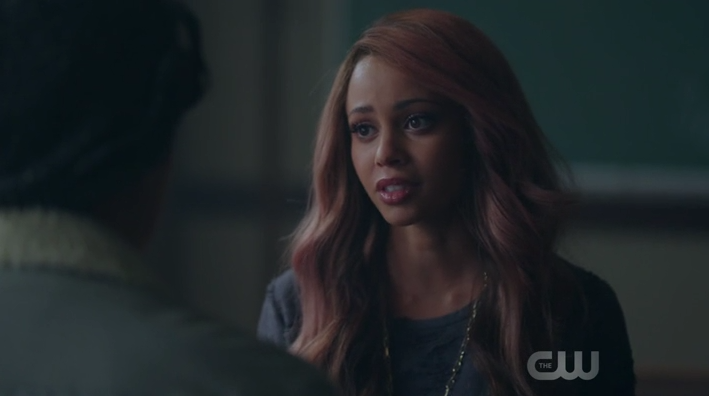 I KNOW WHAT I SAID, BUT I’M BEING FORCED TO STAND IN FOR BOTH THE BEST AND WORST OF SOCIAL JUSTICE SO BEAR WITH ME.

This storyline just jumps headfirst into about five hot-button issues–reparations, the debate over Confederate monuments, the question of who is best suited to tell these stories—with pretty much zero nuance. A prime example is how the word “triggered” is misused two scenes in a row. To be “triggered” by something has a very specific meaning: it means that something activates a powerful physiological and psychological reaction in survivors of trauma. For example, I get triggered by certain scenes and have to go to another room to shake and try and slow down my breathing and convince myself that the awful thing is not happening to me right then. And it makes it much more difficult to explain that phenomenon when people and shows use it to mean “to be exposed to anything that upsets or challenges you.”

The one sort-0f relatable reaction to these revelations about Riverdale’s bloody history comes from Cheryl, who is appalled to learn that her family was responsible for atrocities. She shares her concerns with her mother, who is going full Libertarian Morticia this week. 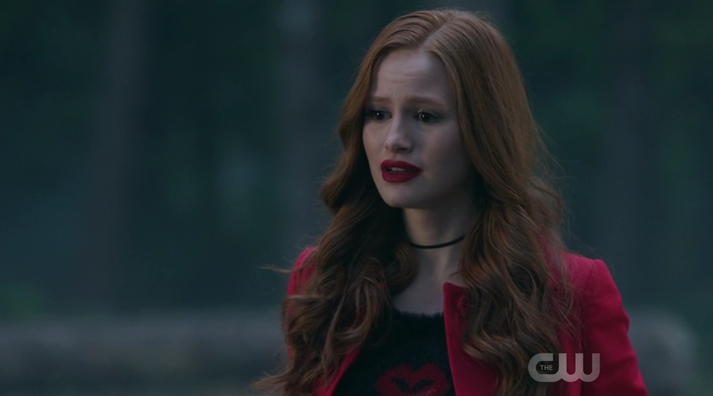 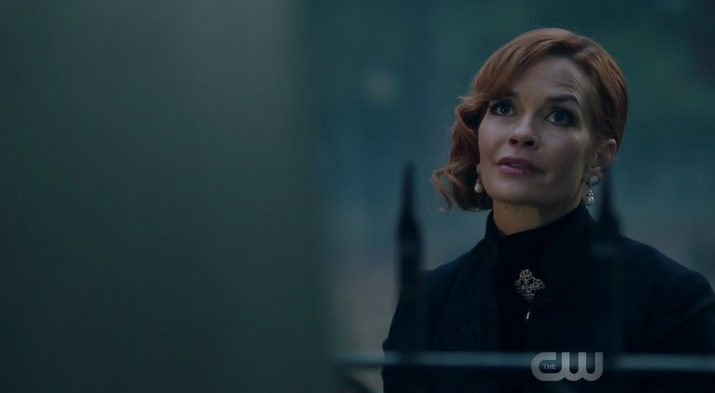 GOOD. NOW TAKE THAT GUILT, CRUSH IT, AND BUILD A WALL OF ENTITLEMENT WHERE IT ONCE STOOD.

At the actual Pickens Day celebration, Toni and the rest of the Serpents stage a protest.

THERE ARE SO MANY THINGS WRONG IN AMERICA TODAY, WE THOUGHT WE’D JUST IGNORE THEM AND INVENT A FAKE CONTROVERSY.

I’M ALL FOR JUSTICE, BUT LIKE, I WAS SINGING?

Any actual reckoning is forestalled by Hiram Lodge, who makes an anodyne speech about how isn’t it cute that Riverdale’s young people are taking an interest in history!

Oof. This episode really could’ve learned a lot from its own message: that movements like this need to be treated carefully or their best intentions are easily subverted by both radial outliers and people invested only in maintaining the status quo.

There’s some other stuff with Cheryl’s mom seducing Betty’s dad, and Veronica and Josie getting into a pointless confrontation about the Pussycats, but let’s just back slowly away from this episode and hope it stops twitching.