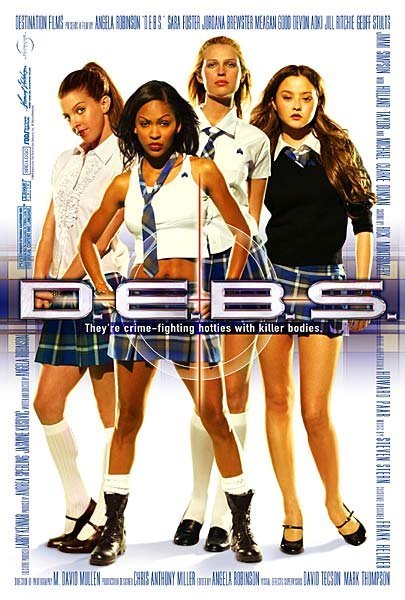 I knew I was gay such a very long time before I knew I was gay.  For example, I specifically remember reading Peter Travers’ review of D.E.B.S in Rolling Stone, and while it would be two more years before the lesbian storyline was directly relevant to my interests, it was like I wrote it on an index card and filed it in the back of my mind.  =Sure enough, when I came out to myself, D.E.B.S. was one of the first movies I sought out.  And it was like it was waiting for me the whole time.

But it’s worth pausing on the Travers review for a moment longer. Here’s a quote: “You might think there’s no downside to a movie that peeks up the skirts of babes in micro-minis, but writer-director Angela Robinson’s dimwitted satire is libido-killing proof to the contrary.” First of all, Peter Travers is a hell of a writer, but boy he really does not know what to do with women existing for something other than his boner. Second of all, Mr. Travers is making the same mistake as virtually every other critic who has ever gotten their hands on D.E.B.S.. It’s not a satire. It’s a daydream. It joyfully picks up tropes from spy movies, broad comedies, and teen dramas and just as joyfully discards them if they stand between the viewer and the easy delight of a really good fantasy.

So first, a little background: D.E.B.S. is based on a short film of the same name, which you need to Google and watch right now. It has Lacey, the first girl Shane ever made cry on The L Word! It has Clare Kramer, who played Glory on Buffy! The writer/director of both the short and the feature length films is Angela Robinson, whom you may know as the high priestess of lesbian content for the past decade. (WHAT THEN IS ILENE CHAIKEN? THE DARK GODDESS WHO DEMANDS OUR SACRIFICES AND FLOODS OUR VILLAGES.)

a. The theme song, which is great because it’s exactly the kind of song all my friends were burning onto mix cds in 2004.

b. The bubble-sheet title sequence, each little vignette of which deserves to be each own film.

c. Janet (Jill Ritchie) which: thank god, because Janet’s face is the source of fully a third of this movie’s comedy. That girl faces so hard.

D.E.B.S. takes place in an elite spy school for young women, recruited through a secret test in the SAT.  So it’s a college situation, and yet the girls dress like Catholic Schoolgirls In Trouble. Also, the existence of the school is supposedly top secret, yet at several points newspaper headlines reference D.E.B.S.’ existence.  Some might view these as contradictions, but to attempt to assign logic to this film is to suck all the joy out of it like color from an Italian ice. Remember, this is a daydream, and in a daydream all you need is an imagination and a plaid fetish.

The star student of the academy is Amy (Sara Foster, a.k.a. Legs For Months) who just wants something more than to travel the world on secret missions.

What she wants she doesn’t quite know (except for the standard vague white girl answer of “art school in Barcelona”), but she knows she does not want her boyfriend (Geoff Stults, who gamely agrees to be a straw man for heterosexuality in general). Her fellow team members are Max (Meagan Good) who is rocking some repressed lesbian tendencies of her own, The French One (man, what ever happened to Devon Aoki), and the aforementioned Janet.

Lucy (Jordana Brewster, who is literally everyone’s type) is a notorious supervillian, despite the fact that all she ever does is rob banks and threaten to sink Australia. (This was in 2004, before they started making so much excellent lesbian television.)

When Lucy and Amy meet, sparks fly, and it’s those sparks that keep the film grounded in real emotion. We can laugh at the sight gag of fifty secret agents suspended in midair, but a film doesn’t get our vote until it passes the butterfly test.

Amy is writing her senior thesis on Lucy (Capes And Capers: Gender Reconstruction and the Criminal Mastermind) and is fascinated by her in that particular way that 21 year-old girls just get OBSESSED with each other.

In short order, Lucy kidnaps Amy for a date in an underground punk club.  (If there’s one lesson every lesbian movie tries to teach, it’s that boundaries are bullshit and girls really love it when you break into their homes.)

Of course, their love threatens to get Amy in trouble with the brass (as personified by Michael Clarke Duncan, who looks a little confused as to how he got there, and Holland Taylor, who has sex hair in every scene). So Lucy concocts an elaborate scheme to kidnap her amour (Alternate title for this film: Stockholm Syndrome). After a long courtship (by lesbian movie standards) the two declare their love.

But when confronted with the judgment of her sorority sisters, Amy has to renounce both lesbianism and supervillains. Of course, at the end—regardless of how many times I watch this movie, I always expect Endgame to be something more exciting than fucking prom—Amy learns to be true to herself.  And Lucy learns, I guess, to be less true to herself(?) and abandons her villainous ways. Though not her villainous car, which is presumably still armed with rockets as they drive off into the sunset.

While there are many lesbian movies to laugh at, there are precious few that we may really laugh with.  Even romantic comedies like Imagine Me And You, while they may elicit a chuckle, rarely invite us in on the joke of their own ridiculousness. But D.E.B.S. does that because it speaks the same language as a million young queers. It wants what you want: a lover to trade barbs and gunshots with before you get down to the serious business of a musical montage, easily vanquishable enemies, and a goddamn happy ending. Like a daydream, the edges are fuzzy; it’s made of the same material as cotton candy. Sticky and insubstantial and so, so sweet.

Musical Numbers: Technically a lip synch, but Lucy singing “A Little Respect” into a pool cue is the first image my brain conjures up when I think of happiness.

How Many Times Have You Watched it, Elaine?: Oh, thousands.

It is on Netflix?: No, but it’s on iTunes, where people of decent taste have given it FOUR AND A HALF STARS. So suck it, Travers.

Next Week: I’m sorry we’re not doing a vote, but I promised people on Twitter we’d do Bound. And don’t act like that’s some big punishment.  There’s a lesbian named Corky, for Christ sake.