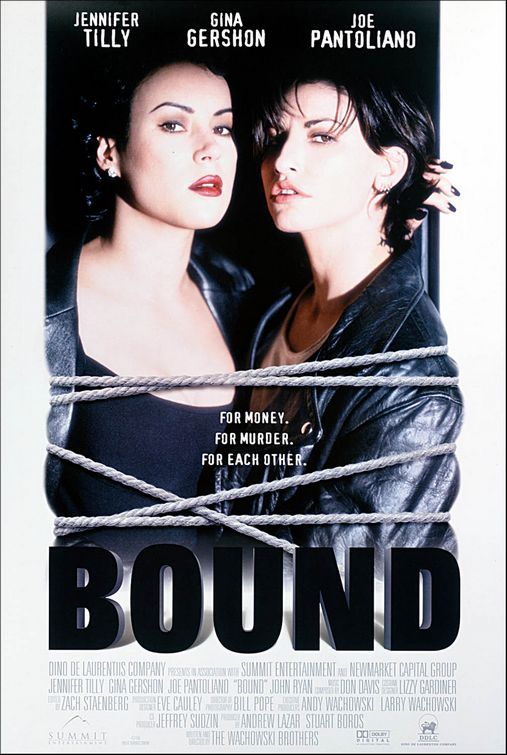 Hello and welcome back to Sapphic Cinema, the column series that is seriously messing with the recommendations on my mom’s Netflix account. This week’s selection is 1996’s Bound, the directorial debut of the Wachowskis and the cultural moment at which half of America’s lesbians got dumb axe tattoos.

Among connoisseurs of the lesbian movie genre, Bound is often listed as “one of the good ones,” and held up as proof that a film can simultaneously have cinematic value and two women kissing. But, as many critics have pointed out, calling Bound a lesbian film is like calling Casablanca a war movie, or calling ketchup a vegetable. Yes, there is lesbianism in it, but it’s merely an ingredient in a black-hearted neo noir. Thankfully, the lesbianism is all clustered in the first twenty minutes, so you’re free to fast-forward over the rest.

There are three things you have to understand about Bound right off that bat:

1. It was 1996 and everyone dressed like dorks. You can’t judge them; they didn’t know any better.

2. Everyone is despicable. This film exists in an amoral universe (the same universe the original noir directors would have depicted were it not for the restrictions of the film code, which banned movies showing unpunished crimes, not to mention homosexuality and “white slavery.”)

3. Gina Gershon is not going to stop doing this thing with her lips, and you cannot make her.

In this grim world we meet Violet (Jennifer Tilly), mistress to the mob.  Violet has a longstanding relationship with Caesar (frequent Wachowski collaborator Joe Pantoliano), who is what would happen if the world’s smallest, most insecure penis came to life and joined the mafia. But Violet pines for a woman’s touch, and a woman’s taste, and a woman’s help fleecing the mob for two million dollars. To this end, she employs Corky (Gina Gerson), an ex con trying to get her life back on the straight and narrow. Or maybe just the narrow.

Here are some thoughts and feelings I have about Corky:

1. Can we pause for a moment or a year or an eternity to contemplate what possibly could have motivated the film’s writers to call this object of lust “Corky.” Is it because she’s so bottled up? Was it the name of a beloved childhood hamster? Please. Someone. Tell me.

2. According to Wikipedia, “Having her character Corky play a jaw harp was Gina Gershon’s idea.” And presumably playing it in her underwear was the compromise she struck with the directors.

3. I know that Gina Gershon is straight in real life and I accept it the same way that I accept that Pluto is no longer a planet: I’m not disputing the science, but there is the scientific truth and then there is my heart truth and they are just two separate things.

4. You could easily call Gershon’s iconic performance of Corky one of the worst portrayals of a butch lesbian in cinematic history, but I see it as one of the best. Because it is so studied, because she’s cribbing from Brando, because like a lot of real life butch women, you can sense that her identity was painstakingly stitched together and you just have to admire the amount of effort that went into it.

Speaking of effort, it’s worth mentioning that this movie was filmed on a shoestring budget, and the Wachowskis had a hell of a time even finding two actresses to even play the leads. And yet somehow it works. Tilly and Gershon aren’t the most conventional pairing, but they have a shared commitment to playing their roles with unironic intensity, just daring each other to play it even more to the hilt. It’s like a game of chicken, except at the end, instead of a car crash, they have sex.

Okay, back to the plot. Violet and Corky meet on an elevator and exchange looks of such intensity its a wonder they don’t both catch on fire.

Approximately five minutes later, Violet lures Corky into her apartment and they compare tattoos. Corky’s is the aforementioned labrys, and Violet’s is a literal violet.

They engage in a couple minutes of this foreplay and then, in the words of the great L L Cool Jay, they’re just doin’ it and doin’ it and doin’ it well.  Another gem from the Wikipedia page is that the filmmakers hired Susie Bright as a sex consultant for these scenes. I am secretly very pleased every time I read something like this, since it implies that what we do in bed is so mysterious that you must employ one of our priestesses to even pretend to do it.

After the sex, they agree that they should definitely steal two million dollars and frame Caesar and/or Johnny (Chris Meloni, playing THE EXACT SAME CHARACTER he does in Wet Hot American Summer).

So yeah, you can pretty much skip to the part where Corky trades her old red truck for a new red truck that is somehow even dykier.

How many times have you seen it, Elaine?: A couple.

Future outlook for the central couple: Violet and Corky will stay together for the length of time it takes to spend two million dollars.

Is it on Netflix: Yep!