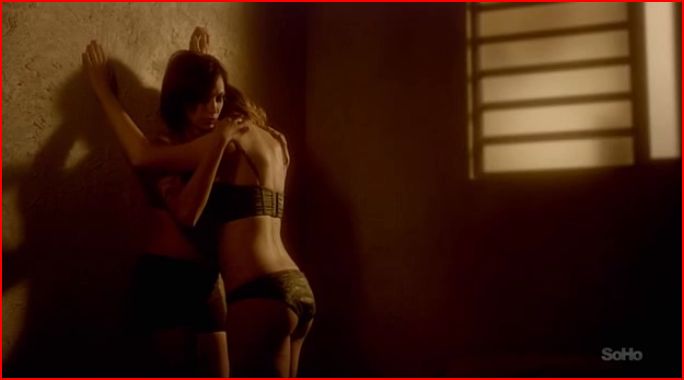 (This recap was originally published on September 26, 2013.)

“A Dream is a Wish Your Heart Makes” is one of the most fucked-up ideas ever voiced in a Disney movie, but maybe that’s because “A Dream is Your Mind’s Way of Processing Shit That is So Overwhelming You Can’t Deal With It Except Cloaked in Metaphor and Fast Asleep” would be hard to set to music. Most of the time we can shrug off whatever craziness our brains throw at us once we open our eyes, but some dreams force us to confront the realities of waking life in a new way. Dream sequences in television serve much the same purpose: introduce something a little too crazy to actually write it into the narrative (yet) and then yank it away when the character wakes up. But still, it’s a clarifying moment for the audience, in which we learn how we really feel about, for example, Spike being in love with Buffy.

Franky and Erica were introduced as two women with incendiary chemistry, but it seemed not only too much to hope that they would actually hook up, it seemed actually wrong to hope for it, given how disastrous it would be. But Erica’s dream about Franky dispels our fears and our logic, and assures us that Frerica can happen, must happen, because it is just so goddamn hot.

But it is with a terror very similar to Spike’s that Erica emerges from her slumber (one assumes she woke herself up with her own moans) next to Some Dude. Some Dude is like “Hey babe, was that dream about me?”

So it’s off to Wentworth she goes, where she is careful to remove her engagement ring before leaving her car. Outside, she is accosted by a reporter who accuses her of incompetence, to which the rapidly fraying Erica responds “You better be glad I just took off my massive diamond, ‘cause that could really hurt your face when I smack it.” Her boss—whose sleaziness falls somewhere between “pronounces the ‘e’ in Porsche” and “amateur porn director”—tells her that the key to salvaging her reputation is Franky Doyle. He wants to make Franky the poster child for rehabilitation, but Erica just wants to avoid her forever, or at least until the image of them undressing each other against a wall fades from her psyche.