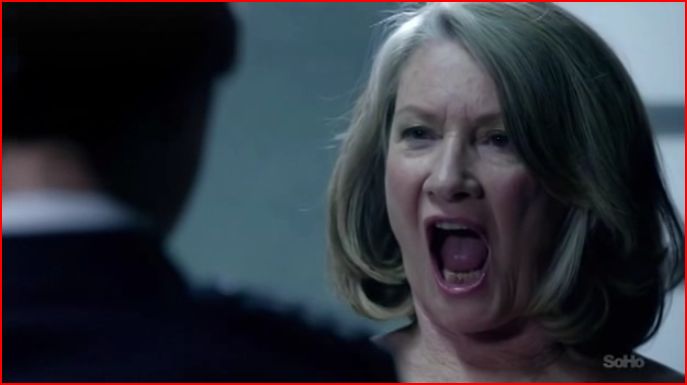 (This recap was originally published on September 20, 2013.)

Previously on Wentworth, Bea was sent to the big house where a prisoner peed right at her and the old governor got stabbed to death and Doreen had to give up her precious little Hot Potato and Toni tried to kill herself with a hoagie and Jaqs made Bea steam-press Franky’s hand and not even Liz could stop everybody from being so crazy.  It’s been a dark few episodes, is what I’m saying.  So it comes as something as a relief that we open this week with everyone just writing in their journals and chilling the fuck out.  The ladies of Cell Block H are all working on speeches about the good things prison has done for them.

Wentworth got Doreen off drugs and gave Liz a position of leadership.  Franky helped Boomer learn to control her temper, and Erica inspired Franky to get her G.E.D. (mostly so she could expand her vocabulary in search of words to describe Erica’s face).  Amidst the violence and the fluorescent lighting, these women have actually helped to heal one another.  And since this is Liz’s episode, it’s Liz who is the most surprised when she says “I’ve changed” and suddenly realizes that it’s true.

As it turns out, all these speeches are for an event hosted by the dark mistress of PR, Erica Davidson.  She’s out to prove to the prison’s board of directors(?) that her rehabilitation programs are working. But you know who doesn’t give a backwards-flushed shit about rehabilitation?

The guards are justifiably concerned for their own safety, now that Erica has them working harder and spread thinner, but also the idea that the women are more in need of help than punishment runs contrary to everything the guards believe.  And I’m not saying that dehumanizing the prisoners makes the guards monsters, it’s just what they have to do to get through strip searches and riots and having various bodily fluids flung at them on a daily basis.  Also, “prison guard” is not a profession generally known for attracting the nurturers in our society.