At the close of her June 19 broadcast, Rachel Maddow broke down in tears. She’d just been handed a report from the Associated Press revealing details of the “tender age” facilities in South Texas housing a rapidly growing number of babies and toddlers ripped from their parents’ arms as they sought to enter the United States. She managed to choke out the first sentence of the report, though she asked her producers to put up a graphic so we wouldn’t have to see her contorting her face, struggling to master herself. Then finally she was confronted with this passage: “Lawyers and medical providers who have visited the Rio Grande Valley shelters described play rooms of crying preschool-age children in crisis.” She got as far as “medical providers” before giving up, turning away from the camera, and signing off.

I watched Rachel Maddow cry at midnight, and I could tell that by the time I woke up, there would be a hundred published reactions to it. I had nearly as many reactions to the moment myself.

Rachel Maddow’s tears were so striking to me because I had cried earlier that day when I watched the previous night’s episode. It was the one that played the audio taken from inside the camp, in which children beg to see their parents, and one six year-old repeats her aunt’s phone number again and again with furious, heartbreaking determination.

I didn’t mean to listen to the audio. Rachel announced that she was about to play it and I hit pause, so I could do a calculation that has become a strange ritual of citizenship and media consumption in recent years. I asked myself if hearing the crying children would make me stronger or weaker. Would it galvanize me to fight, or would it merely provoke tears that would accomplish nothing, that would dry and be forgotten and eventually become one more thing to which I had grown accustomed? In the end I decided that I could not afford to be that upset on a Tuesday when I had work to do, so I skipped ahead in the video, past where I thought the audio would have ended. Only I didn’t skip far enough, so I still heard much of the recording, heard the children, howling inconsolable. 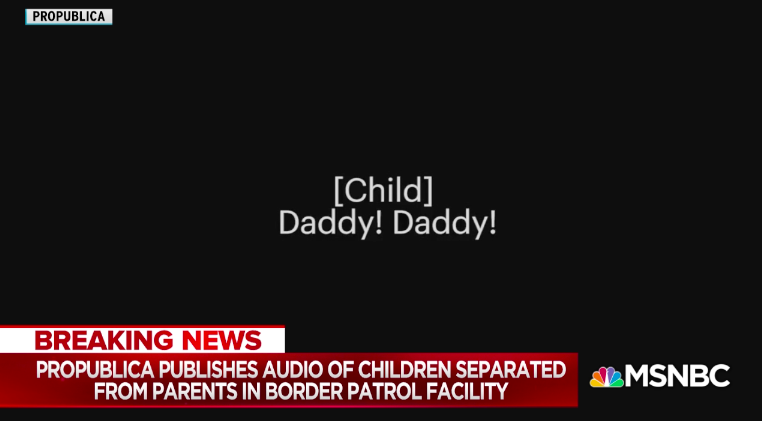 And I cried. Big, ugly, face-contorting tears. And I was amazed and impressed when the video cut back to Rachel Maddow, sitting at her desk, shaken but dry-eyed. I wondered how she did it. I wondered if she’d listened to the audio several times beforehand to get all her tears out before she went on the air. I wondered if perhaps this ability not to cry at tragedy was the great defining trait of journalists, which distinguished them from the rest of us. 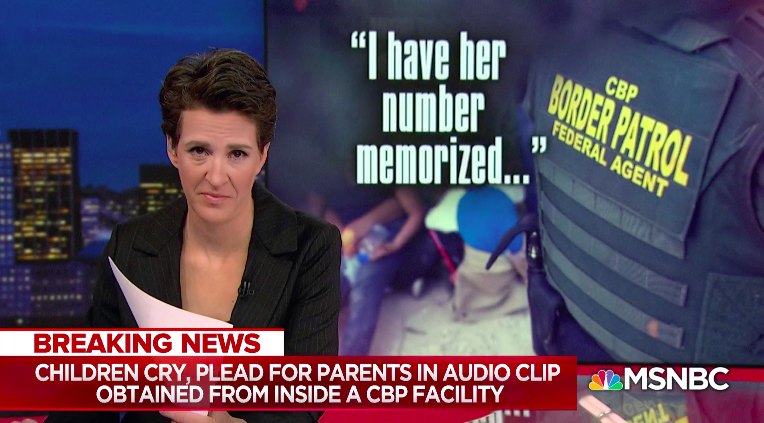 If Rachel Maddow could avoid crying at the audio clip, which so viscerally awakens the primal human desire to help the crying baby, what made her break down at the dry language of the Associated Press? The language itself, partly. “Tender age,” as an expression, serves as its own succinct denunciation of this policy, evoking soft child features and hands, and the knowledge that this experience will stamp itself permanently into those tender, still-forming psyches. (Contrast this with the report’s characterization of the facilities as “shelters,” which is a perversion of language that none of us should play along with.) There is also the cumulative nature of this horror, as an average of 70 children are torn from their parents each day, with no policy in place to reunite them. The shame of it builds and builds.

Living under the Trump Administration has been like two years of a constantly blaring fire alarm. It never turns off but you learn to ignore it in order to keep on living, and the occasions become fewer and farther apart when you check the set of your jaw and the tightness in your shoulders and remember you didn’t always feel like this. But this catastrophe cuts through the numbness because a child’s cry is the one alarm no one can fully tune out. You help if you can, and if you cannot, you cry in sympathy.

As I watched Rachel Maddow succumb to tears, I felt a sense of affinity but also of dread, because I knew that her detractors would mock her for it, accuse it of being a staged spectacle, make it into a t-shirt to wear at Trump rallies. I also know that as a woman, tears are a great risk. There are always those, not only on the right, who see a woman’s tears as proof that she is no longer entitled to be taken seriously. That’s a prospect that frightens me, because Rachel Maddow commands one of the most powerful and unifying platforms in the country, and that’s not something we can afford to lose, even so she can exercise her right to be human.

Then, of course, there are our left-wing hard-liners, whose inevitable reaction to Rachel Maddow’s tears is that they are, above all, counterproductive. Tears offer an immediate relief, and it is a relief we do not deserve while children are screaming for their parents in government cages. Nothing is ever enough for these insufferable people, but there is a point worth examining in that critique. You can burn yourself out on emotion without ever accomplishing anything, and halfway through Trump’s first term, many of us already have. But there is a sense that the human horror of this moment is awakening action, and in that there is a glimmer of hope. Donations are pouring in to offer legal aid to parents and children, citizens are pressuring their lawmakers, governors are withdrawing their National Guard troops, and people across ideological lines are united in a way that would not be possible at this, the most partisan time in living memory.

Tears alone are an inadequate response to the child separation crisis, but they’re where we all have to start. This morning, Rachel Maddow apologized for her tears.

I agree that it is her job to speak, but last night she did, for all of us.

Donate to The Florence Project (AZ)

Read a list of resources and non-monetary ways to take action against family separation.