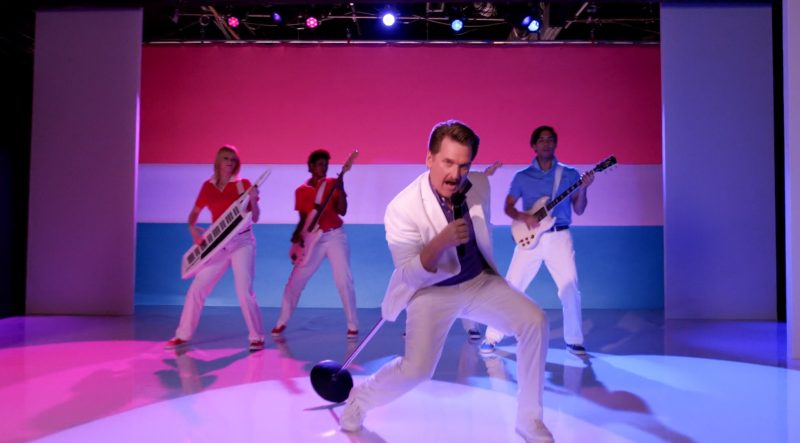 1. You hate love triangle storylines on TV and are afraid that writers would use increased bi representation as an excuse to write even more love triangles, or worse. If there is more than one bisexual, what is to stop them from forming a love quadrangle? Or some sort of horrifying love pentagon involving a girl named Ann, her best friend Lacy, her childhood best friend Mike, Mike’s ex-boyfriend Steven, and Steven’s lab partner Diane who has a crush on Lacy but has already agreed to go to the Spring Formal with Mike even though he really wanted to ask Ann?? High school math classes did not cover the polygons required to describe the cliched situations that might be written if everyone was bisexual.

2.You have heard on the internet that bisexual people are all cheaters and you believe everything you read. (Pathologically so. It’s actually quite a problem. You have purchased so very many “Must Have!” items.) You are not sure if the internet meant that bisexuals cheat in relationships or on tests, but either way you are opposed.

3. You have an inherent distrust of all people who are not exactly the same as you, including but not limited to: people who put the toilet paper roll on the wrong way, people who like Star Wars and Star Trek exactly equally, people who eat jello shots before they’ve finished setting, and people who wear visors backwards and then squint in the sun like there’s not a solution for that on the back of their stupid heads. This sort of us vs. them thinking helped your ancient ancestors survive and you’ll be damned if you relax it even a fraction.

4. You’re a homophobe and you wouldn’t want bisexuals to be left out because that would be rude.

5.You are not actually familiar with what the term “Gold Star Lesbian” means but know that you are a fan of both lesbians and sticker based rewards systems, and have thus made an unfortunate logic leap about the moral quality of anyone gold star lesbians are uninterested in.

6.You are a spite demon and you will die if there is not a sufficient level of hatred in the world. Politics, the dismissal New Yorkers have for New Jersey, and the feeling of getting cut off on the freeway may be enough to sustain you someday, but there are currently too many cute videos of sassy babies and interspecies animal friendships on the internet and you need this.

7. You dislike men so much that you have carried this to the illogical conclusion of disliking anyone who has the capacity to care for them. Bi women, straight women, mothers of male children, and people who have healthy relationships with their fathers tremble before your disapproval.

8. You are under the mistaken belief that being bisexual is some sort of blending of gay and straight, rather than a distinct identity. Your father trained you to accept no half measures and you never will, dammit. You similarly avoid 1% milk, 2-in-1 shampoo/conditioner products, Ben & Jerry’s Half Baked ice cream, Arnold Palmers, and Arnold Palmer the golfer by extension.

9. You always hated Phoebe on Friends and thus dislike everything she sang about: men, women, bisexuals, grandparents, farmers, farm animals, smelly cats, nose hairs, sticky shoes, snowmen, etc., etc. You live a miserable, shoeless existence in an arid cave somewhere north of Death Valley. Even there, you are not safe from your own presence.

10. You have misunderstood the term to mean sexually attracted to bicycles and think that is just wrong.

11. You violently despise the musical stylings of any or all of the following: David Bowie, Josephine Baker, Halsey, Amanda Palmer, Freddie Mercury, Taylor Bennet, Lady Gaga, or Leonard Bernstein.

12. You have an intense phobia of werewolves and have been frightened off by the humorous simile about a bisexual being bisexual no matter the gender of their current romantic partner, just as a werewolf is still a werewolf when in human or wolf form.

13. A bisexual person broke your heart one time. They told you that it was 100% completely and exclusively because they were bisexual and you super believed them.

The one that got away: I just can’t do this anymore. The judgment, the suspicion.

You, hurt and confused: Is this because you’re bisexual?

The untrustworthy ex: See, this is what I’m talking about! I’m trying to have a real conversation with you and—like always—you’re focused on the fact that I happen to like girls and guys.

You, utterly blameless: Aha! I always knew this relationship would come down to you being bisexual in the end.

Them, finally honest: Fine, Alex. Whatever. Yeah, I’m a flagrant bisexual and that’s totally what this is all about. God.

Mirielle Smith is a nanny and aspiring TV writer in Los Angeles. She makes inappropriate cross stitches, loves Star Trek, and genuinely hopes to be referred to as a flagrant bisexual someday. You can find her on Twitter @MyriadSmith.