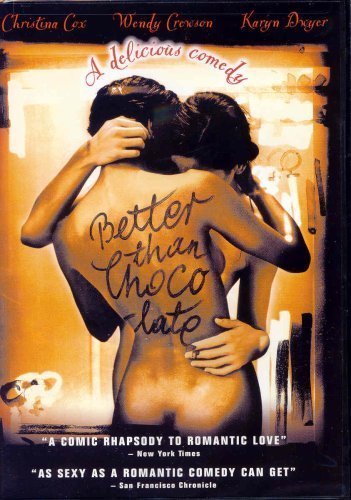 Hello and welcome to Sapphic Cinema, a new column series celebrating the gems of queer film history.  Of course, not all gems are created equally. Some are diamonds, some are quartz, some are things you thought were rocks but which turn out to be ossified pieces of dog shit and you have to drop them and go wash your hands.  Yet even films of negligible cinematic value can be life lines when you feel alone with your queerness, and you just need to see two people who look like you smush their faces together. It’s the reason we scour the darkest corners of the internet for obscure lesbian movies.  It’s the reason we suffer through videos without subtitles, wildly extrapolating from facial clues and English cognates what might be happening. And it’s time those forgotten treasures be held up to the light, both for those of us who have seen them all twice, and for a new generation who doesn’t even know how good they’ve got it.  For our first selection, let’s journey back to 1999 for one of my personal favorites, Better Than Chocolate.

In the north of Canada there is town occupied almost entirely by lesbians. Do not look for it on any map.  But if you wander through the tundra with love in your heart and Ani DiFranco on your stereo, it will allow you to find it.  In this paradise, the women gather nightly for elaborate lip-synching competitions at a club called the Cat’s Ass, and the relationship status of all attendees are broadcast over the loudspeaker for the edification of any interested parties.  It is here where our two star-crossed lovers, Maggie and Kim, first meet. Kim is an itinerant artist, and graduate of the Buffy Summers School of Barrette Functionality.

Maggie is a recent college dropout who like, maybe wants to be a writer?

Mostly though, Maggie wants to be the gayest girl in Canada, and with that goal in mind has surrounded herself with the greatest team of supporting characters ever assembled, all of whom either work at or frequent 10% Books, the local literature/dildo store.  There’s Frances, the store’s proprietor (fun fact: she is played by novelist Ann-Marie MacDonald, who wrote the classic queer novel Fall on Your Knees).  There’s Carla, the omnisexual toy enthusiast, who rightly has a bone to pick with lesbians discriminating against bisexuals.  And there’s Judy (fun fact: played by Peter Outerbridge, from both Bomb Girls and Orphan Black), the trans lounge singer. Judy is the most graceful person in all of lesbianville, despite doing battle with her parents, TERFs, and even the transphobia of Frances, the object of her affection. Please recall what I said earlier, about this film being released in 2009, long before trans issues were at the forefront of national, or even queer issues. But not only does Judy fight the power, she SINGS about it in the original number “I’m Not A Fucking Drag Queen.”

So yeah.  That alone is worth the price of admission.

Apparently the actors were confused about how exactly to play this scene so it’s overdubbed with the sound of giggles, wind chimes(!), and a folk song that utilizes the memorable phrase “with your perfect fingers you touch my heart.” But before this romp can reach its foregone conclusion, who should show up but Maggie’s mom (funnest fact of them all: played by IRL lesbian Wendy Crewson).

Her presence means that Maggie and Kim have to hide their love (and yeah, they are referring to it as “love” after the first hour). But they are so adorably earnest in their clandestine affections, it’s enough to make me wish I had stayed closeted longer just for the sheer joy of sneaking around.  It earns us the “be quiet my mom is in the next room” sex scene, as well as the obligatory “bathroom of the gay club” sex scene.

Better Than Chocolate seems tremendously dated now, partly because of how far we’ve come as a movement.  The characters fight against an oppressive government who refuses to let the bookstore import its illicit books (which Maggie crusades against by destroying even more inventory in several ill-advised window displays).  A gang of skinheads menaces the two main characters, but even they aren’t as irritating as the café owner who won’t let Maggie and Kim kiss in public.

As much as this film leaps hurdles that are in our rearview in 2015, it also offers some timeless pearls of wisdom.

-Just because you aren’t the best at something, doesn’t mean you shouldn’t what you love.  (This was a revelatory idea when I first heard it, since I had previously taken Little Women’s advice that if you’re not going to be the best, you should just marry a German philosopher and resign yourself to misery.)

-Something is always going on when you’re nineteen.

-When you want something, lunge at it.  It probably won’t work out, but then, things usually don’t work out anyway, and at least when you lunge you know you’ve tried your best.

-Tell you’re mother you’re fucking queer, before somebody else does.

In a genre dominated by ponderous art-house tragedies and low-budget melodramas, Better Than Chocolate is a comedy with a heart of gold.  It might not be a diamond, but it’s definitely a precious stone.

Musical Numbers: SO SO MANY. AT ONE POINT, THREE PEOPLE WHO NEVER APPEAR AGAIN LIP SYNC TO “I’M IN LOVE WITH JULIE CHRISTIE.” THE FULL SONG. AND IT IS ARGUABLY THE BEST PART OF THE WHOLE MOVIE.

How Many Times Have You Watched It, Elaine?: A Couple.

How Many Times Have You Really Watched It, Elaine?: Infinity.  Like, infinity and a half.

Is it on Netflix?: Yes! Go watch it right now and report back!

Let me know what you think in the comments and please leave your suggestions for our next film.