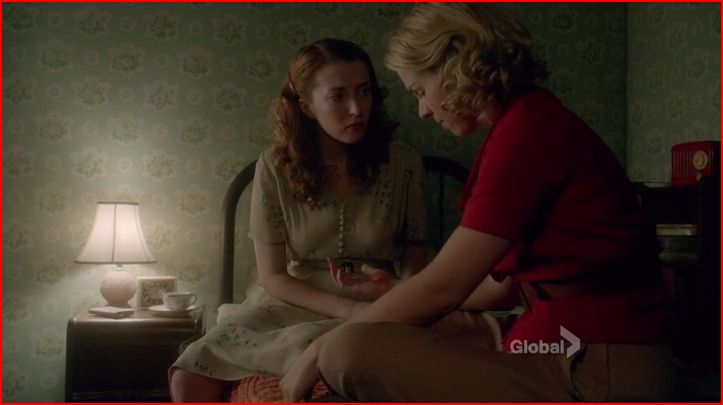 Good morning and welcome to the most action-packed episode of Bomb Girls yet.  Last week, Kate delved into a life of sin in an attempt to gain more jazz credibility, Betty let Ivan make all kinds of hockey metaphors in the back seat of his car in an attempt to gain some hetero credibility, and Lorna’s son, Eugene arrived home on leave from Europe.

Ok.  Right from the get-go I have serious reservations about Eugene, who the show opens dancing in the living room with Sheila.  To the untrained eye, the scene is as wholesome as a Rockwell painting, but I’ve found that there is a direct correlation between a man’s assholism and his conviction that everyone he meets needs to see the outline of his penis, and that whole long underwear/temple garb ensemble leaves far too little to the imagination.

The dancing finally ends when the radio alerts us to the fact that three Death Eaters have escaped from Azkaban and are now on the loose.

Over at the vintage underwear expo, Gladys is frowning over a postcard from James, which reads

War truly is hell. All of the good servants are off fighting and a gentleman is forced to remove HIS OWN COAT at the theatre.  Please stay true to me and I, in turn, will try and remember to use a condom.

Gladys is really not thrilled with the thought of James unsupervised.  Betty has her own troubles with Ivan, who has now resorted to puppy-facing her every time she walks by, an experience every lesbian who has ever let a guy down understands.

Kate, meanwhile, is giving the descent into madness she promised us last week.  Having already found a substance to abuse, the next thing she needs to complete the image of “disturbed preacher’s kid” is an asshole, someone to treat her just as badly as her father did and thus never challenge her image of herself.

Ladies and gentlemen, Kate Andrews has found her asshole.

That night, Vera is really over Carol’s attitude toward her in the secretaries’ lounge, but rather than beat her to a pulp, she simply invites herself to one of Vera’s high society Lesbian Sex Parties, in the hopes that in the heat of passion the two of them might find some common ground.  When she arrives, the other ladies are just standing cluelessly around the “diddy bags,” as nervous as a bunch of college freshmen.  But Vera, for whom no act of sexual prowess is too daunting, takes charge from the formidable Mrs. Beaverton (I swear to god that is her name) and before long, they have an efficient pleasure assembly line going, to the satisfaction of all involved.