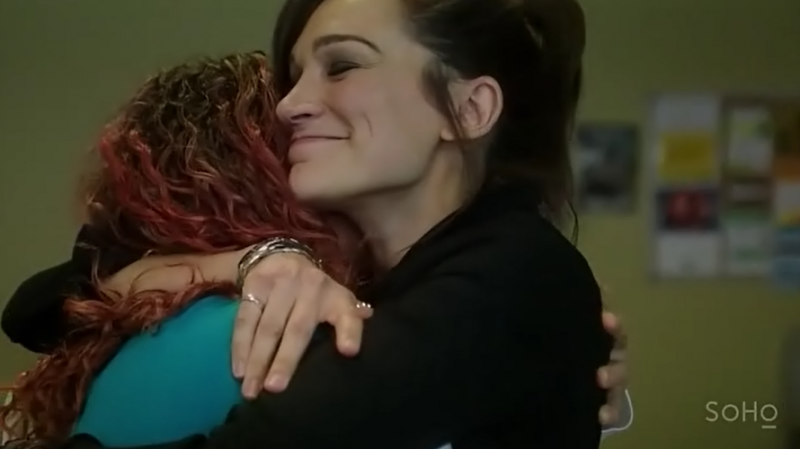 Life-ruiners. All of ‘em. I hope that’s the job title listed on everyone involved with this show’s passport. I hope it’s printed on their tombstones. I hope—and that has always been the most dangerous thing I can do as a lesbian TV viewer.  Of course, we always knew these dark days were coming, having tarried longer in the sweet summer sunlight of the equipment room than we had dared to dream possible. No show doles out that much happiness unless they’re planning to get it back in tears. And sure enough, this was one of the grimmest hours of television I’ve sat through in a while. But we shall soldier on because we are queers and we are Wentworth fans and punishment is what we signed up for.

So. Right out of the gate, our worst fear is allayed: Bea Smith is alive. Actually, she’s hovering somewhere between life and death, which for her is an ocean. In this visual metaphor, life is the vast and unforgiving sea, where you must constantly fight to stay afloat. And death is a soft beach, where Bea can finally rest. Not only that, Debbie is waiting on the shore!

I want you to remember this moment going forward because it’s important to the show’s mythology that death is this blissful reunion with lost loved ones, (as opposed to Jon Snow’s voyage to the great beyond, which was a boundless nothingness). When someone dies—and they will—let’s all remember where they’re heading. In the meantime, though, let’s be grateful that Bea is pulled back into the messiness of life and away from the idyllic shores of Sandals Resort for The Dead.

She is dragged back to consciousness, though she remembers nothing about the attack. Of the people who arrive at the scene, Allie (truthfully) claims not to have had any idea the attack was coming, and Kaz insists that Ferguson stuck her own hand in a vat of hot oil.

Vera buzzes around trying to get the truth out of them all, and when they lie, she regards them like a terrier might if it were very disappointed in you. (I never have enough time to go on about how much I love Vera, but I do very much, now that we’ve gotten past her almost firing Bridget.)

Speaking of Bridget, she pays a visit to Bea’s recovery cell to discuss the self-inflicted injuries the doctors found on her thighs.  Bridget is tremendously talented at speaking to women as though they are friends, not clients, but there’s no way Bea is going to open up to her about the cutting and the depression and the love. For that, Bridget knows she’ll have to call in the big guns. (For the record, it was adorable how distressed y’all were last week at the suggestion that Bridget would violate her ethics by telling Franky about Bea’s recent queerness. I do not actually think she would do that, but I do think she would suggest that ‘ol Fanny Bandit should give her a visit.)

It’s obvious to everyone that Kaz knew about the attack, but for some reason, Will is convinced that he’s the one to get her to open up about it and lay the blame on Ferguson. But Will has a tragic tendency to underestimate how much people hate him. So when he pulls Kaz into a supply closet, he thinks he’s being a good, decent man. But those just aren’t concepts that ring a bell for Kaz Proctor, and his words aren’t words he can hear.