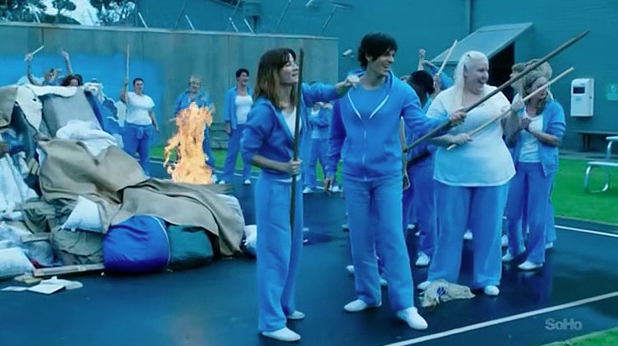 Hello and welcome back to Wentworth Correctional Center.  A funny thing happened since last we visited this cerulean-tinted wasteland: Wentworth got popular. Thanks largely to Netflix and people looking to fill the hours until the return of Orange is The New Black, this once-obscure drama is now an international phenomenon.  Suddenly people approach me like “OMG HAVE YOU HEARD OF THIS AUSTRALIAN WOMEN’S PRISON DRAMA?” And I have to fight the urge to roll my eyes like some insufferable snob and say, “Yeah, I’ve actually been following it from the beginning. When it was better.” [2019 SIDEBAR: WOW I WAS BEING INSUFFERABLE AT THE START OF SEASON 3! APOLOGIES FOR THAT!]

Because I will always think that the Wentworth of Season 1 was in a different class of television than the work they’ve done since. I know many of you disagree with me and that’s okay, but that’s where I’m coming from. However, there comes a time with everything—TV show, band, even person—when you have to accept that things have changed, and you can either love the new and let go of the old, or walk away entirely. The latter option I cannot do, at least not while Frankie Doyle has a swaggery bone left in her body, so I am going to try and stop mourning the old Wentworth and attempt to appreciate the new. If I fail, please understand it comes not from a desire to kill anybody else’s joy, but because I suffer from a disease where I feel like I can berate things into being what I want. I know Wentworth’s potential, and like that AP English teacher you loved/hated I JUST WANT TO SEE IT SUCCEED.

Okay. Let’s have a brief catch-up for anyone who hasn’t just binge-watched the first two seasons.  (The show helpfully provides its own little intro, but since it totally leaves out Erica it is Garbage and Dead To Me.)

Season One: Bea Smith, battered woman, is sent to cell block H, where she meets a diverse group of women struggling to become better people while fighting their own destructive tendencies.  The most wounded, charismatic, and violent of these inmates is Frankie Doyle, whose status as Top Dog is only contested by Wentworth’s crime grandmother, Jacqueline Holt.  Both of them think Bea is gunning for position because she made Jaqs’ tea wrong one time (this is a big deal in Australia) so Jacqueline sends her son, Brayden, to kill Bea’s daughter. Destroyed by grief, Bea murders Jaqs with a ballpoint pen. Plus and also Erica Davidson is Wentworth’s governor and she is just a white hot ball of sexual energy wrapped in a pencil skirt and she and Frankie make out one time and it is heaven.

Season Two: FORGET ABOUT BONDING AND STRUGGLING TO BE BETTER PEOPLE; THAT WAS BULLSHIT.  So the first and worst thing that happens is that Erica disappears, and with her, Frankie’s motivation to be anything more than a thug. The new governor is Joan “The Freak” Ferguson, who believes that she is incredibly intimidating and also that she is a champion fencer.  Neither of these things are true. Much of the dramatic tension is derived from whether or not the prisoners will be permitted to garden in their spare time, and things don’t really come together until the season finale, when Bea challenges Frankie for the position of Top Dog and wins. But really it was just a diversion because of all the hemophilia drugs Bea had been hoarding to get herself checked into the hospital in order to escape in order to pick up a gun she had mailed to an old friend in order to kill Brayden Holt.  It was a pretty elaborate revenge plot but it worked. Well it worked inasmuch as Brayden Holt is now dead, but it failed inasmuch as it got Bea and Liz locked back up and Mr. Jackson suspended from guard duty for three months.

And that’s everything you missed on Glee.

Season 3 time-jumps several months into the future, which is one of those flabbergasting decisions that really try my patience with this show. We miss Bea’s trial and arrive just in time for the verdict: life without parole.  A reporter does some excruciatingly heavy-handed expositioning about how Vinnie Holt, last remaining member of his family, “collapsed and died” at his son’s funeral, so many people now hail Bea as a hero.

(Awesome fact: I read an interview with Danielle Cormack where she a. objected to the one-dimensional and ultra-violent depiction of prison life in this show and b. said she didn’t want Bea to wait for Brayden’s smirk to shoot him. So I love Danielle Cormack now.)

Bea’s escape didn’t just impact her life; it reflected very badly on the Governor. So much so that the board is thinking of firing her and replacing her with a saner, kinder candidate.

The only board member Joan still has on her side is Channing, and that’s only because she’s blackmailing him.  The board says Joan is fired if one more thing goes wrong.  So as you might imagine, Joan isn’t too thrilled to learn that Bea has been sentenced to her prison ‘til death to they literally part.  She subjects Bea to a humiliating strip search and warns her to toe the line (while playing the stereotypical predatory prison lesbian).

Lord, I am so glad we still have Doreen and Liz around to inject a little humanity and warmth into all this backstabbing. By now Doreen is visibly pregnant and showing her ultrasound pictures to anyone who will stand still. Liz, meanwhile, is still in protected custody from when she busted Boomer with the heroin. The two of them chit chat about how the inmates are all on edge since Joan stripped them of their privileges, and the pot is close to boiling over. Then Liz broaches the timeless question: “How is Franky?”

Franky has moved from the laundry to the kitchen, where she now reigns supreme.  She also has a new woman in her life, whom she greets with a friendly headlock and face lick.