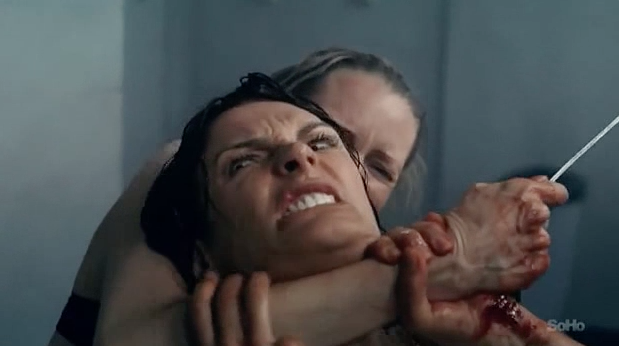 First of all, I must thank Punky Starshine for doing such an excellent job recapping last week’s episode. I’m just jealous I missed out on that whole hair-smelling-Wild Orchid scene. Not that I need them to be a couple, but I’m a bit adrift without a single ship on this show anymore.

So, previously on Wentworth, Joan informed Fletch that she would fire him given a third of a chance, presumably since he is competition for the governor job and Vera’s affection. Frankie found a new drug pipeline via the gardening project, and Bea saved Simone from death-by-8 ball just so she could try (and fail) to stab Brayden Holt.

In the immediate aftermath, Bea storms around the slot, cursing her shoddy aim and Brayden’s unbearable smirk. All the while Joan watches her on CCTV just trying so hard to be a Bond villain.

That night in cell block H, the ladies are all set to party with some toilet hooch when Franky is like “put that nasty stuff away…because I’ve got REAL VODKA.” She passes around little airplane bottles of Smirnoff and it makes me pine for the bygone days of season one, when Franky balanced out the stich with the carrot. Apparently the show knows that it’s gone a little dark this season, because then Boomer, Doreen, and Liz start a booty-shaking contest, with Frankie as the enthusiastic judge. But even though that’s something that might have happened last season, it still doesn’t feel like last season. Liz agrees with me, and steadfastly refuses to have a good time (or drink, so good for you Liz).

In other news, it turns out that there are repercussions of stabbing the heir to a crime dynasty. Simone hears from her boyfriend that the Holts are sending someone inside Wentworth to kill Bea. Simone’s post-beating makeup is incredible, by the way; she looks like she’s at least half zombie. She also learns that, because of her attack, she won’t be able to smuggle drugs in anymore, meaning that Frankie gets to continue the halcyon days of top dog status.

Meanwhile, Joan releases Bea from the slot, I guess just for the thrill of seeing how things play out. She’s like, “Fly free from the nest, birdie, and dip your beak in blood.” I really do not get what Joan’s deal is, y’all.

Once Bea is back in gen pop, Simone comes up to confront her about stabbing boy king Brayden.

Simone: YOU USED ME. And here I thought I’d finally made a best friend.
Bea: Well yes I used you, but I also protected you from Frankie. From now on, let’s watch each other’s backs.
Simone: SO WE ARE BEST FRIENDS.
Bea: Um. Sure. Sure, fine.
Simone: In THAT case, I feel like I should tell you that the Holts are coming to kill you. Ooooooh do you think we should have a secret handshake?

Outside, some new prisoners show up to begin their stay at Chez Wentworth, and we are meant to assume that one of them is Bea’s assassin.

And then there’s Maxine. I think that introducing a trans woman in a female prison drama is bound to invite comparisons to Laverne Cox in Orange is the New Black, and anyone on earth would pale next to that goddess. But I find Maxine particularly problematic, because she is portrayed by a cis man (Socratis Otto) in a very bad wig. Like, are there no trans actors in Australia? Did you try New Zealand? The wig thing makes sense, I guess, if she has been off her hormones for a while, but that issue is never addressed. Every single scene with Maxine is about her difference, her otherness. And I’m actually fine with the rest of the characters saying shitty things to her that reduce her to her anatomy–they’re not the most enlightened people ever—but the camera seems to treat her with the same crassness as the inmates.

Doreen also walks in on Boomer servicing the craggyface man in exchange for drugs, but Frankie tells her that if she keeps her mouth shut, they could arrange some alone time with her and Nash. Side note: does anyone else severely mistrust Nash? I know he hasn’t technically done anything wrong yet, but there’s something about him that bothers me. Possibly his teeth.

Back in the laundry, Fletch enlists Maxine to help him move a broken sewing machine. A minute later, Bea is handling some laundry, when that same sewing machine falls from the ceiling and very nearly kills her dead. I’m not really clear about where it falls from since she isn’t standing near a stairwell or anything, but the people making season two of this show seem to think we won’t notice details like that. Whatever, it confirms that someone is indeed trying to kill her.

In an effort to find out who, Bea bribes the blonde lady guard to find out if any of the newbies are connected to the Holts. The guard—who apparently has a pretty serious gambling addiction—agrees, but only because she’s bet that Bea will survive at least a week. Speaking of bets, blondie and the prisoners place another one about the exact nature of Maxine’s genitalia, and I really want Laverne Cox to descend in a giant bubble like Glinda the Good Witch and tell them to go fuck themselves.

Outside in the parking lot, Will’s mystery stalker strikes again, but has moved on from vaguely threatening notes to tire-slashing. It has to be Fletch unless it is Joan. It does seem kind of like a Joan move, in that it is creepy but not half as intimidating as it thinks it is. Will just lost his ride though, so he takes to the CCTV to see who might be responsible.

Rather than researching his own mystery, he elects to eavesdrop on Fletch and Vera. Despite presumably knowing that anyone could be listening in on his conversation, Fletch chooses this moment to say “BOY, I HOPE WILL NEVER FINDS OUT I WAS SLEEPING WITH HIS WIFE. HE’D PROBABLY BE REAL MAD.”

Indeed, Will is real mad, and marches straight to Fletch to punch him in the face. It’s all very macho.

That night, Frankie finds Bea in the library, and presses her against a stack of books.

Sadly, Franky’s intentions are purely pragmatic. She hands Bea a zipgun—a homemade prison gun with only one bullet—to fend off her mystery assassin. As with everything else in prison, this exchange means that Bea owes Franky a favor, and we can at least dream that it will take the form of some lesbian activity.

With her zip gun in hand, Bea sneaks into the cell of crying Amanda Seyfried, and asks her politely if she was sent by the Holts to kill her. As it turns out, she’s like the only innocent man in Shawshank, I guess. She was once falsely accused of killing a child, though, which apparently is still enough to get you killed in prison.

In the showers, Boomer tries to track down Maxine to get a look at her equipment. Maxine, however, decides she would rather take a shower strike than have strangers decide whether or not she is a “real woman.” But this is all leading up to a Big Lesson about how determining gender solely on the basis of anatomy is cruel and reductive, right? It has to be.

Later on in the showers, Bea is hosing off, like someone who has never seen Psycho before, when the camera pans to the next stall, where we see a plaster leg cast with no one inside. SHIT, PEG LEG METH HEAD WAS FAKING ALL ALONG.

What ensues is a fantastically shot and choreographed fight scene. It takes a lot for me to fear for the welfare of a main character, who I know isn’t going to be killed off, but damn if I wasn’t white knuckling this whole scene. They brawl and Bea gets slashed again and again, but can never get a clear enough shot to use her zip gun. For a moment, you really think she’s about to get straight up stabbed, but then Maxine comes to the rescue, and punches Meth Face right in her meth face. As a special bonus, Bea gets a glimpse of Maxine’s much-debated genitals, though we the audience are merely treated to the sight of some pubes. And I get that the show is trying to do a nice thing with Maxine, but EVERY SINGLE SCENE with her points out her masculinity. She’s always shaving her face, or lifting a heavy object, or refusing to ask for directions or some shit. Just let her be a fucking person, OK?

After the fight, Maxine plants the zip gun in Meth Face’s cell, and when the guards find it, they discover it was booby trapped to injure whoever fired it. Bea confronts Franky about this, but Franky is like “oh but I thought you were going to give that to Simone to use against me. I would never deliberately injure you.” It’s hard to tell if Franky is just playing next-level chess here, or the writers are just desperately trying to make this story work.

We close out the episode with Bea confirming that Maxine is indeed the bearer of a vagina. The rest of the inmates settle their bets, and accept Maxine into the tribe. Which apparently would have been unthinkable had she not chosen or been able to avail herself of genital reassignment surgery? What exactly is the lesson here, show?

How did y’all react to Maxine’s storyline? Are you as frustrated with this season as I am?