Well, this is going to be a weird recap. Usually I set aside an entire day to write about Wentworth, because I really feel that the show and you, the reader, deserve that kind of effort. (And it’s a pretty significant commitment, given that I’m not getting paid for this in any meaningful way. PLEASE SUBSCRIBE.) But today, I plan to knock this out by early afternoon, help some friends move across town, and get an early start on Janet King (where the lesbians take baths, not showers, thank you very much). Because frankly, nothing happened in this episode. Several things almost happened, but were averted when the witness recanted, the probe was withdrawn, and the lesbians agreed to stay friends.

That’s not the end of the world, of course, and I’m not going to throw up my hands and declare that Wentworth’s best days are behind it. In fact, a weak episode late in the season, right before the last arc kicks in, is a pretty common problem with dramas, and even shows like Game of Thrones are guilty of it. Planning a season of television is a little like making cupcakes, in that it’s difficult to measure the batter out perfectly, and you always end up with one cupcake that’s a little smaller than the rest. This, then, is our wonky cupcake, our Dorne episode, our voyage into the plumbing.

So last week, Kaz and Will dedicated themselves wholeheartedly to the destruction of Officer Jake, which is sure to be an uphill battle since he has both Joan and Vera on his side. Allie and Franky got jobs in the window box workshop, from which they planned to stage their great escape. Liz fretted endlessly about Sonia, Sonia fretted endlessly about her blazer collection, and Joan regarded every single development, no matter how tiny, as part of her grand design. The most important thing to happen was that Bridget finally got sick of Franky’s shenanigans and quit her job, which was sad but probably for the best. After her departure, Franky immediately flung herself into Allie’s arms like a tornado embracing the earth. After a brief, frenzied hookup, Allie backed out, fearing that Bea’s ghost might be watching. (Although I would suggest that if Bea’s ghost was watching, she probably thought it was pretty hot in spite of herself, like the rest of us.)

This week, the big question is: how will Franky and Allie deal with the aftermath of their aborted tryst? And the answer is: with surprising maturity! Allie acknowledges that they were both pining for absent partners, and they promise not to let the experience interfere with their friendship or escape plans. 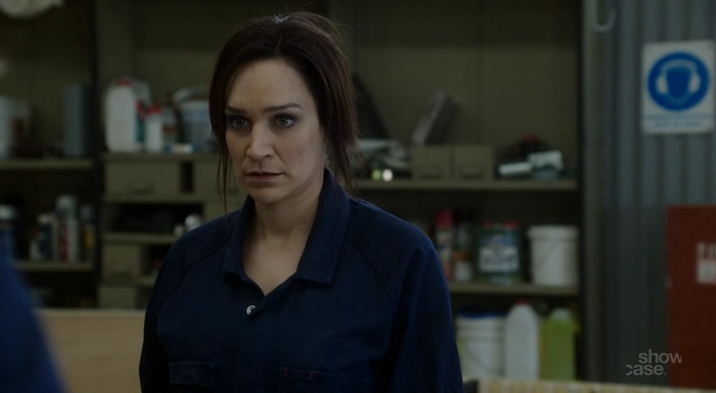 HEY ALLIE, CAN YOU DRILL ME? 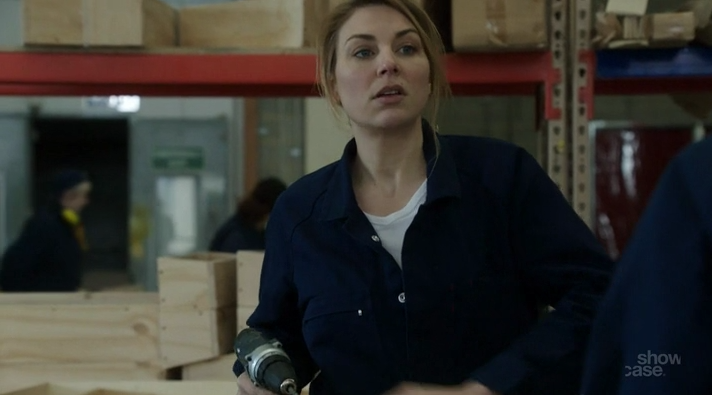 I THINK FOR NOW I’M JUST GOING TO DRILL MYSELF. BUT I’LL BE THINKING OF YOU THE WHOLE TIME.

In a way, I resent being teased with the prospect of these two coupling up, but I think I’d be even more upset if they dove straight into a relationship neither of them is ready for, so I’m going to save my ire for a more deserving target: their terrible escape plan. The two of them decide that what they really need to bust out of this joint is a walkie-talkie they can use to misdirect the guards. And then the ENTIRE FUCKING EPISODE is dedicated to its acquisition.

FIRST, Franky reaches out to her father, and implies that she will forgive him for missing her entire childhood, if he just does her this one favor.

BUT I’M JUST A PLUMBER! 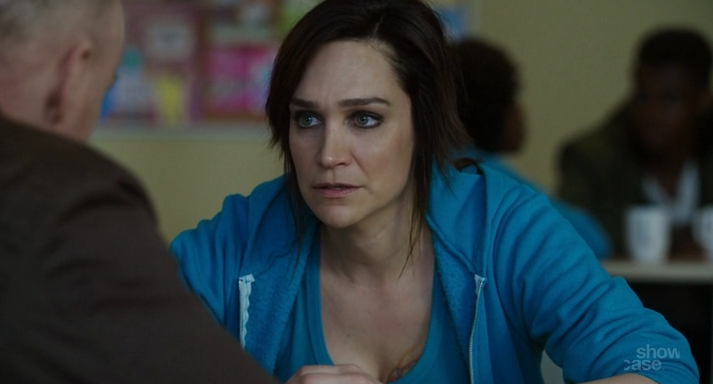 NEXT: Franky persuades Vera to give her computer access, ostensibly so she can help the majorly hot inmate Iman with her case. While online, she uses Bridget’s login information (abusing her trust even in absentia) to access the prison’s plumbing schematics. 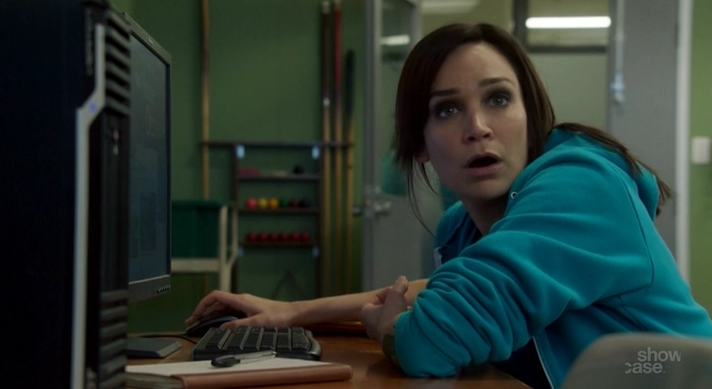 THE FIRST PERSON IN HISTORY TO PRETEND TO BE ON TWITTER WHILE ACTUALLY DOING SOMETHING PRODUCTIVE.

THEN (still with me?) Franky throws a tennis ball with the plumbing schematics hidden inside over the prison wall, to be intercepted by dear old dad. 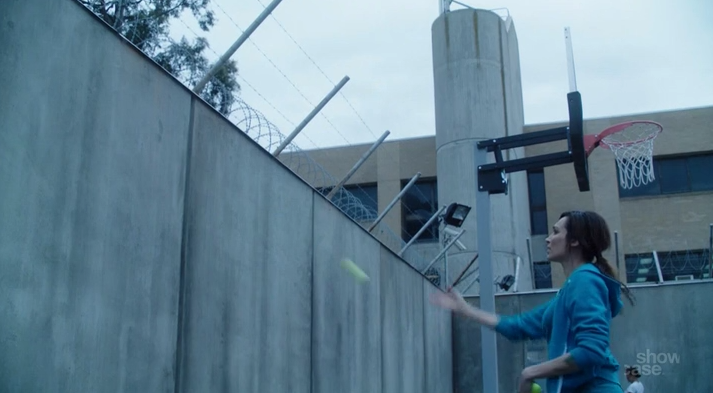 NO ONE TELL MARGARET COURT ABOUT THIS.

While Franky is busy dealing with this latest labyrinthine plan, Allie has some issues of her own to handle. Kaz and Will pressure her to narc on Jake for selling her drugs. But she doesn’t. I mean, she thinks about it, but then Franky talks her out of it, worried that Joan might do something to hurt her little sister. And that’s pretty much it, really.

Even without Allie as a witness, Will tries to convince Vera that Jake is a slimy bastard, at which point Vera sheepishly informs Will that she and Jake are shacked up together.  So again, that storyline fails to move forward either, although the tiniest seed of doubt has been planted in Vera’s mind. 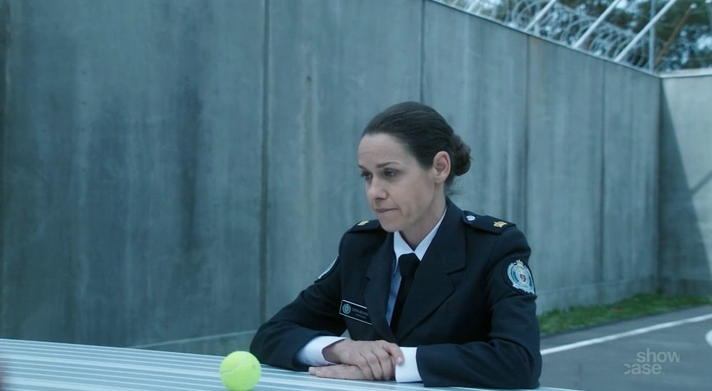 UGH MEN ARE THE WORST. MAYBE I OUGHT TO JUST TAKE UP TENNIS AND BE DONE WITH IT.

Will never really stood a chance against Jake and Joan; he is just too straightforward and upright. But you’d think Kaz would have a trick or two up her sleeve. I mean, this was the woman who organized a bloody tampon revolt last season! But Kaz has been painfully subdued ever since the van accident, which strikes me as a real waste of Tammy Macintosh’s talent at simultaneously playing a crazed vigilante and an impassioned crusader for justice.

Instead of utilizing its deep bench of talent, the show just keeps passing the ball to Joan, even when there’s nothing for her to do. Like, this week all she manages are some threatening photographs, and mostly spends the episode playing herself in games of chess. 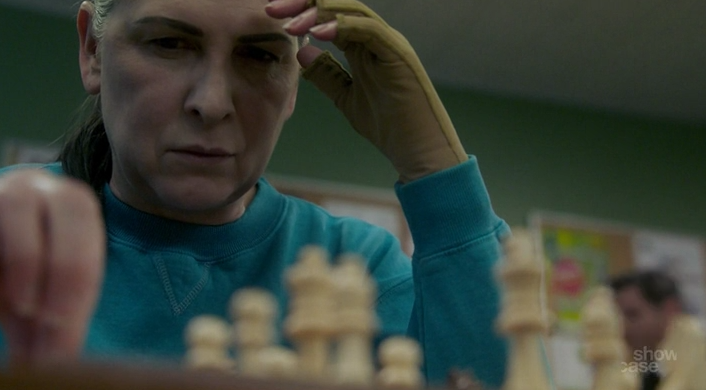 I hate to single out whoever wrote this episode, but I’m trying to imagine typing this scene, which turns Joan into a caricature of a Bond villain, with a straight face. Joan hasn’t actually done anything since de-tonguing Juice, and her scenes are losing their tautness.

Case in point: the emotional climax of this episode occurs when Franky’s dad uses his plumbing equipment (which is roughly as sophisticated as a heart surgeon’s) to sneak her a walkie-talkie through the pipes. 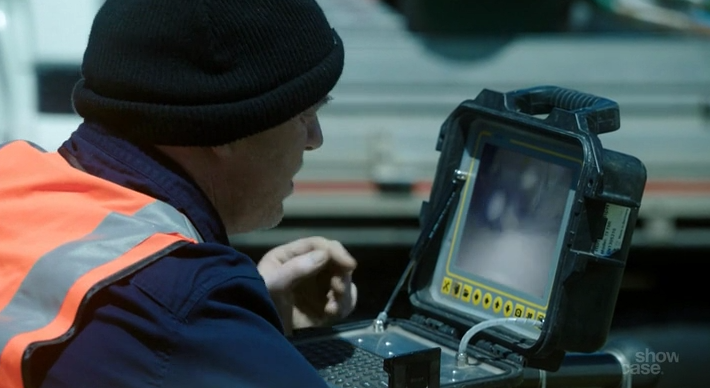 IF YOU LOVED “ESCAPE THROUGH THE AIR DUCTS,” THEN YOU’LL GO CRAZY FOR “WENTWORTH’S SEWERS GET A COLONOSCOPY.”

But, owing to inexplicably poor planning, Franky and Allie schedule the drop during Joan’s shower time, and for a moment she hears the metallic clanging of the walkie-talkie against the drain. 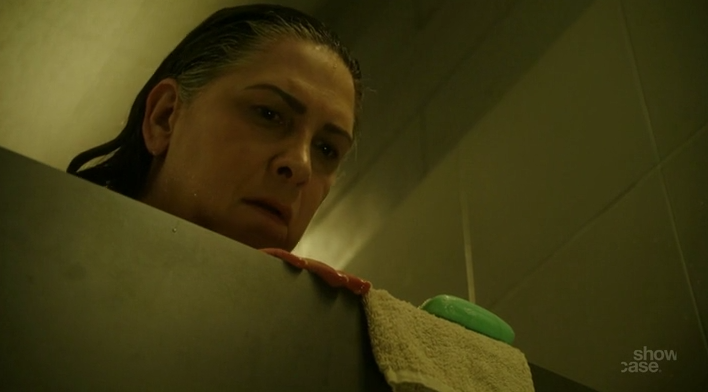 AM I HALLUCINATING? IS THAT ONE OF MY MENTAL ILLNESSES? IT’S SO HARD TO KEEP TRACK.

And you’re like, oh shit! Either Joan is going to find the radio or that scope is going to give us a look straight up into her personal plumbing! But neither of those things happen. Franky and Allie warn Papa Doyle in time, and get the radio through the kitchen pipes instead.

You’d think that at least the Liz and Sonia storyline would advance a little, but Sonia APOLOGIZES to Liz for yelling at her. (Poor Liz is laboring under the misapprehension that Sonia killed the awful detective, but honestly I hope she believes that forever, since she will definitely be heartbroken if she learns the truth.)

Really, the only thing that could be construed as a new development concerns Iman. In the course of investigating Iman’s Twitter feed, she discovers that one of the people hurling anti-immigrant sentiment at her was MIKE PARCHEESI HIMSELF. 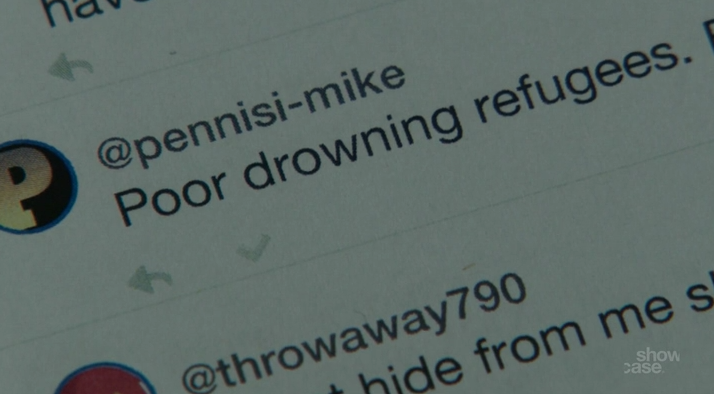 We also learn that Iman has stolen Franky’s treasured kite necklace, but while it’s nice to know that this character has a role to play beyond eye candy, I’m still very confused about what this all means. Did Iman kill Mike because he was a xenophobic bastard? Or because she had some kind of secret vendetta against Franky? 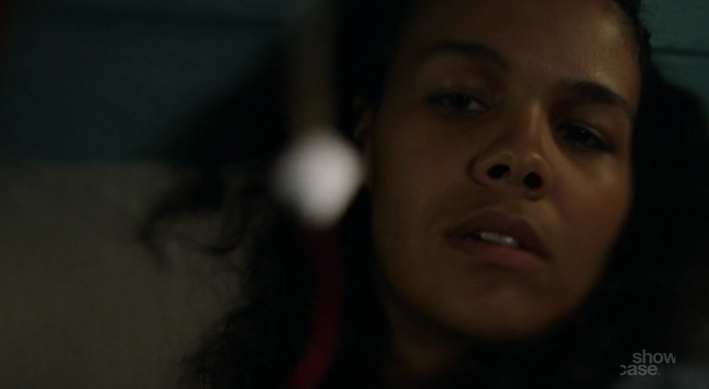 HONESTLY I HOPE YOU DO SOMETHING EVIL. ALL THE OTHER VILLAINS ARE JUST PLANTING FLOWERS AND PLAYING CHESS.

So in the next few episodes, we’ll see Vera (hopefully) accepting the truth about Jake, Joan’s master plan revealed, Franky and Allie’s escape, and Liz and Sonia’s showdown. Hopefully that’s enough to keep the rest of the season action-packed, because while I can deal with Wentworth making me laugh, cry, rage, and swoon, I really can’t handle it making me yawn. So in the immortal words of Carly Rae Jepsen, let’s cut to the feeling.