Editor’s Note: On the weekend of March 3, thousands of women descended upon Las Vegas  for the first ever Clexacon, a convention to celebrate queer media and queer fandom with actors, writers, and critics. This is one woman’s story.

Clexacon was my first con.  An informal survey suggested as many as half the people there were con virgins, which might explain why the bartenders kept putting cherries in everything.  In the hope that it’s twice as big next year, I thought it might be helpful to share some of my experiences.  The most important advice I can offer is this:

Know your goals and make it easy for people to give you what you want.

I went to Clexacon with very specific goals.  I’m pleased to report I achieved almost all of these, mostly by throwing money at the problem and/or by popping anti-anxiety drugs and giving zero fucks at key moments.

For starters: Waverly’s jeans.  On the TV show Wynonna Earp, the character Waverly frequently wears high-waisted jeans.  Regrettably, for my age group, high-waisted jeans evoke nothing so much as elementary school moms.  The friends I’ve persuaded to watch the show with me keep getting hung up on it, and getting them closure on #jeansgate felt crucial to getting them to commit to season 2.  Thus, a major purpose of my trip to Clexacon was to raise the subject of Waverly’s jeans with Emily Andras (showrunner) and Dominique Provost-Chalkley (actress).  I knew this feedback wasn’t likely to be well received, so I made it easy for them to enthusiastically reject it.

First, I bought an autograph with Emily, and opened with “I have an impertinent request…”  This rehearsed line felt awkward as she had just finished signing someone’s boob, but that did give me confidence that my eccentric plot was within the bounds of reason.  I asked if she would mind signing one of the following pre-prepared printouts:

You can guess which one she picked.

Autographs, incidentally, can be a great way to get a minute with a celebrity if you have a random question that’s not suitable for a panel (particularly if you catch them when the line is short).  I bought an autograph with Elise Bauman of Carmilla and Almost Adults expressly to ask her if she’d seen Kevin Smith’s movie Yoga Hosers.  She is both openly Canadian and a dedicated yogi, and watching that movie, I felt offended on behalf of both groups.  This was in part because of all the groups you could choose to make fun of, Canadians and yogis are the most likely to try not to be offended.  As a red-blooded American, I felt honor-bound to be offended on their behalf, and I wanted to check with a representative whether that was necessary.  She hadn’t seen the movie and I told her if she does, she should get high first, which I’m reasonably confident Kevin Smith would approve of.

Elise, by the way, while very likely on the introverted side and not a huge fan of the glaring spotlight of a con, is nevertheless a witty little motherfucker and if you can make her laugh, it’s totally worth it.

Back to #jeansgate, my next move was to buy a photo with Dominique.  Photos are NOT a good way to talk with celebrities because they are boom, boom, boom, in-and-out in under 20 seconds, but they do take requests for the photo.  I asked her if she’d do me a favor and flip off my friend Rob for a good cause, which she was delighted to do because she is fucking Miss Congeniality and frankly the MVP of the convention, imho.  From singing on panels to heckling other panels to getting a drink or even asking if there was a “queue” for the restroom, she did a fantastic job acting like she was having the time of her life and was just so happy to meet everything with a pulse, which is pretty damned hard to pull off in line for the ladies’. 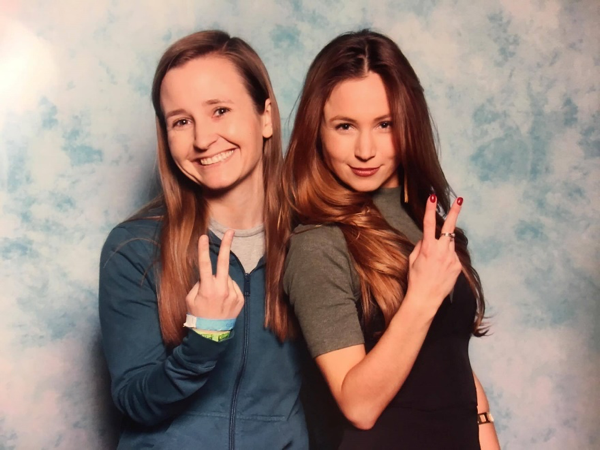 Her magical fairy powers were in full force at the Cocktails for Change event, which, before I describe, I must emphasize raised thousands of dollars for the Tegan & Sara Foundation and was for a good cause.  In reading the following eyewitness account, please remember I am a bad person.

I spent a moderate amount of time agonizing over spending as much as much money as I did for the opportunity to feel extremely awkward in the presence of lots of other terrified guests and even more terrified celebrities who I’m sure in no way felt like escaped zoo animals.  Unlike the strictly regimented interaction of autographs, photos, and panels, this was a free-for-all and, from my biased and too-sober perspective, a social-anxiety bloodbath. 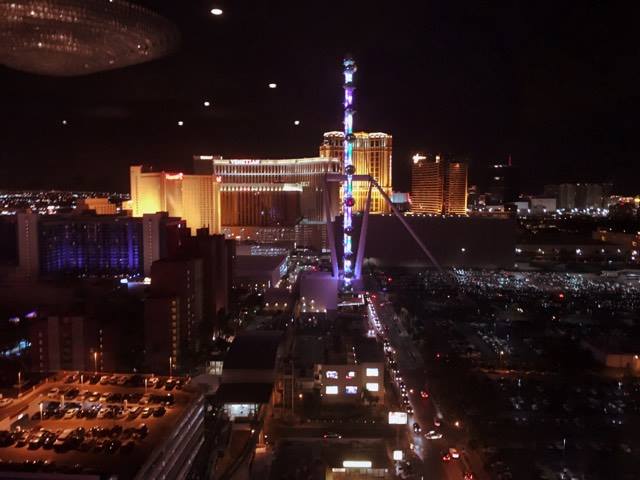 I took this picture at the cocktail hour.  For the first time in my life, I literally had to wait my turn to stand awkwardly by myself at the window.  Everyone was trying so hard to be brave, and there was just not enough alcohol in Vegas.

The actresses were all doing their best (FOR CHARITY!!), but apart from Dominique and her +99 Accent of Charisma, the only person I saw who was 100% owning the room and never appeared remotely discomfited by the “there are a dozen crazy anxious weirdos who paid a bunch of money to bask in my presence all politely but simultaneously vying for my attention” situation was Lost Girl’s Rachel “Life of the Party” Skarsten, whom I later heard from some staff members is the Funnest Nicest Bestest Person Ever.  In ironic contrast, I accidentally ambushed a fleeing Zoie Palmer when she thought she was free & clear at the elevators, and I continued to feel bad for not picking up on the “OH GOD I NEED A BREAK” social cues for a good two days. #StillTeamDoccubus #SorryBootThat

The cocktail hour *was* successful from a #jeansgate perspective, though, as enough patient waiting, hovering and looming eventually got me a minute of Dominique’s attention.  I started by confirming that, yes, her Waverly accent is so impeccable that hearing her real accent for the first time is a total mind-fuck (“Excellent. I love fucking with people’s minds.”).  I have zero hope at this point that Waverly’s wardrobe will ever escape the early 90’s, but at least now my friends and I have our expectations set appropriately and can move on with our lives, appreciating that the creators are good sports about it.

Similarly, I used the cocktail hour to follow up on a question I’d asked at the Wynonna Earp panel.  Asking that question took a “give no fucks” moment, as it was one of the first big panels and they hadn’t figured out the whole “audience questions” thing.   I had to both be greedy and ask the lady with the microphone if I could go next when she happened to stand near me, and then be shameless and stand up for an awkwardly long time as it became clear the previous question waaaaaasn’t quite over.  It was worth it, though, because I am genuinely concerned for Officer Haught’s cat.

This may seem like a ridiculous stretch, but let’s face it: two other lesbian-owned cats we’ve seen on popular television died unnatural deaths.  Miss Kitty Fantastico, owned by Willow & Tara on Buffy, is implied to have died offscreen in an unfortunate crossbow accident (God, how much do we hate Dawn?  Sorry Michelle Trachtenberg).  Mr. Piddles, Dana’s cat on The L Word, is implied to have been murdered by a jealous lover.  #BuryYourGays is more than enough to deal with; if anything happens to Haught’s cat, I’m detonating #BuryYourPussies.

So yeah, I totally used the cocktail hour to show Kat Barrell (Haught actress) pictures of my cat and suggest that Fatso, too, deserves representation. Kat, by the way, wins both the “Super Nice Person Clearly Still Trying to Figure Out WTF Is Happening and Why Are People Showing Me Cat Pictures” Award and the “You Will Mispronounce Her Last Name” Award.  Her idea to organize the crowd to do the Wave-erly at the Wynonna Earp panel was a highlight of the convention and I hope she never loses that wide-eyed enthusiasm.

In totally unrelated news, at Emily Andras’ class on screenwriting, when I asked if she could recommend any books on the subject, she suggested Save the Cat.  YES.  SAVE THE CAT.  GOOD ANSWER.

So on the whole, I’d say I had a successful Clexacon.  The other major tips I’d offer are: know your limits and know your budget.  On the limits side, I’m autistic, socially anxious, and spent half the first day with a killer migraine because 1) I didn’t take anti-anxiety meds, 2) I didn’t make sure I had easy-to-eat foods and was too nerve-wracked to eat anything, and 3) I didn’t bring earbuds and even the lines were super loud.  Taking lorazepam and buying all the canned peaches in the casino convenience store made a huge difference in my enjoyment of days 2 & 3, and next year I’m bring anti-nausea meds. #NotHungover #JustMigraineThings

On the budget side, you will spend more than you planned.  Whatever you plan to spend on souvenirs, double it, the booths were awesome.  Whatever you plan to spend on food, triple it (thanks, Vegas!).  Plan for the worst case scenario that all the celebrities you are a huge fan of will have extra photo & autograph tickets available for sale on the day.  In total, I probably spent twice as much as I had budgeted, and I’m definitely saving accordingly for next year.

And I do hope there’s a next year.  While I was a little surprised by how much time I spent this year feeling uncomfortable, lonely, anxious and/or trying not to throw up, I’m both glad I went and confident next year would be a much better experience.  First, because I’ve learned how to do it better, and second, because the organizers were also so clearly learning how to do it better as they went along.  Everything from queuing to concessions to questions went better on days 2 & 3 than on day 1.  I hope they send out a survey for feedback, but on the whole I was repeatedly impressed with their ability to incorporate feedback on the fly.  This was a convention a lot of people needed, and the organizers seem like the right people to do it.

Why did I need this convention?  Back in the real world, I don’t know anyone else who likes Wynonna Earp or Carmilla or Lost Girl whom I did not introduce to those shows, and even then I have very few friends I feel like I can persuade to watch them with me.  I went to this convention not just to enact elaborate Machiavellian schemes to give feedback on some already awesome shows, but also to see proof that the people I see on Twitter and commenting on YouTube videos are real and yes, they do like the same things I do.  And if you’re in the same boat (or any of the same ships), I hope to see you next year!

Alexandra Ressler is an overeducated walking raw nerve who constantly metronomes between anxious and annoyed. Her sole respite from this is obsessively rewatching & analyzing feminist comedy/fantasy/superhero shows, usually between midnight and 3AM (her bedtime is 11). During the day, she is a not-remotely mild-mannered data scientist. You can follow her self-conscious bitching on Twitter @aeressler.