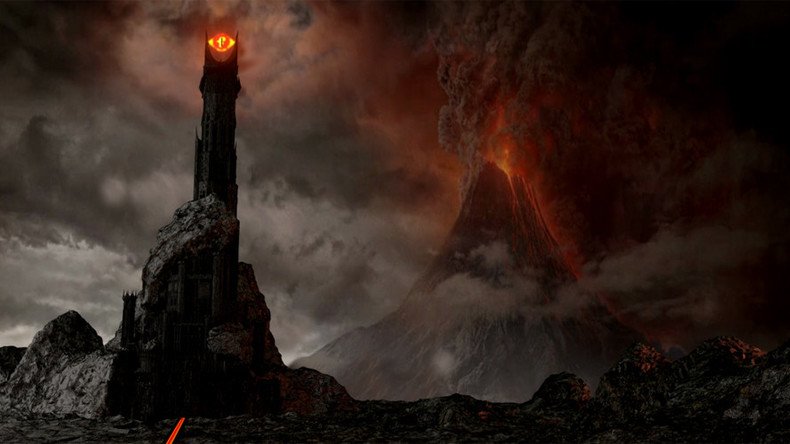 On June 20th, 2021, Amazon founder and pathological wealth hoarder Jeff Bezos ascended into inner space in a rocket made in his own image. The news coverage of this event went to sometimes elaborate lengths to frame a billionaire’s joyride as proof that a Great Man’s achievements are the fundamental metric of a successful society.

In that spirit, we are pleased to share an archival article celebrating the achievements of another legendary figure, who shared in Mr. Bezos’ fondness for grand plans and extremely forthright symbolism.

Today–from the ruined halls of Osgiliath to the Peaks of of the Misty Mountains–human, orc, and elf ceased their labors, looked up into the eastern sky, and beheld a new light nestled between the stars and Mount Doom. The Dark Lord’s fortress at Barad-Dûr was at last completed, and his eye shone upon its pinnacle, looking down upon us all.

The completion of Sauron’s rebuilt tower is the culmination of a dream the Dark Lord has treasured since he was but a lesser incarnation of evil, sitting at Morgoth’s knee. It’s a dream that has withstood its share of setbacks–from his early defeat at the hands of Isildur, to the agonizing ages spent reassembling the wisps of his essence, to his triumphant return to form (literally) as The Necromancer.

But to look at Sauron now–which is inadvisable for more than a few seconds at a time lest his fiery gaze fall upon you–one sees only a leader in his prime. And one can only imagine the pride he felt in at last opening his vast, disembodied eye (looking remarkably svelte and, dare we say, sexy for a being of his countless years). How gratifying it must have been to sit atop his creation and survey the ruined lands he had leached of life, and the peoples he had subjugated in service to his vision.

Each obsidian facet of Barad-Dur is a testament to Sauron’s single-minded dedication to this project. According to rumor, the Dark Lord specifically insisted that the tower be taller than Orthanc, bastion of the fallen wizard Saruman. But longtime Mordor spokesman The Mouth of Sauron, denied this. “It’s just a friendly rivalry between Sauron and Saruman. There’s room for more than one dark tower in the world,” he said. “Although ours is taller. And girthier, which most people agree is more important anyway.”

Of course, despite this undeniable triumph, the Dark Lord is not without his detractors. Some point out that while the tower was conceived by Sauron, it was technically built by Orcs laboring in “unsafe working conditions.” Others question why, at a time when Mordor is a barren wasteland, so many resources should be dedicated to the whims of one quasi-immortal being. But to these objections, the Lieutenant of Barad-Dûr merely laughs and waves a (strangely insubstantial) hand. “Great achievements require strong leadership, and you don’t build Middle Earth’s tallest tower by asking people if it’s a ‘good idea.'” It’s tough to argue with that logic, since, love him or hate him, there’s no denying that nobody dreams bigger than the Dark Lord.

And what is the dark tower if not a dream made real? In that sense, Badad-Dûr is truly for all of us, since it reminds us of what one person can do with only enough confidence, armies, and an impotent and ineffectual opposition. Its symbolic power is such that one cannot look at it without feeling shivers up one’s spine (or exoskeleton, for the arachnid megafauna community).

So what’s next for the Lord of Mordor? Sources close to Sauron (those who have gazed into the palantíri and glimpsed the horrors of his unfathomable mind) insist this triumph is only a stepping stone to even greater goals. Unfortunately, they were not at liberty to disclose the specifics of those goals since their sanity had been burned away by the exposure to the Dark Lord’s consciousness. For now, the notoriously press-shy Sauron is remaining coy as to his ultimate plans. He prefers to let the tower itself do the talking: a pillar of razor-sharp stone built on a foundation of bones, and at the top, a flame-wreathed eye with an unmistakable twinkle.