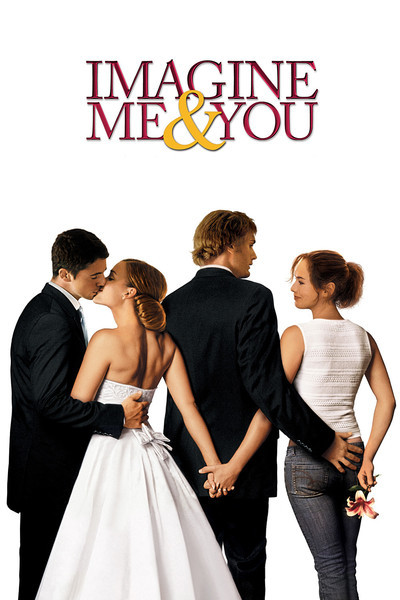 (This review was originally published on January 5, 2016.)

You know that part in The Lord of The Rings when Galadriel hands Frodo a vial full of light from the most beloved star of the elves? Well, if Galadriel had been a lesbian (I mean clearly she and Celeborn had some kind of “arrangement”), that vial would have been the distilled essence of Imagine Me & You, the 2005 romantic comedy which served as our light in dark places for a very long time.

So many queer women have an Imagine Me & You story. It was released at the moment when our culture began to cautiously depathologize queerness, and was one of the first (and still one of the only) glossy, mainstream films with lesbian content that a closeted girl could easily access.

My version of the story stars with the day I saw that iconic hand-holding poster at my local movie theater, where it was almost certainly placed by mistake, since there was no way in hell my little Appalachian town ever screened the actual movie. But I was enthralled by the poster—I still remember where it was placed in relation to the popcorn machine—and I was terrified that someone would catch me looking at it. (Other people were suspecting me of Certain Tendencies long before I suspected them in myself.)

It was two years before I had my Big Gay Revelation, and within a week, I had located and done a frame-by-frame analysis of the film. (My little sister came out around the same time, and since I couldn’t bring myself to touch the copy at Blockbuster, I had her girlfriend burn me a copy, which I still have, even though it is scratched right on the kissing scene.) So when I, and a lot of women my age, watch this movie, we’re not just seeing the action unfolding onscreen, but our own histories, and the part this movie played in them.

IM&Y is a romantic comedy in the grand British tradition of Four Weddings and A Funeral, replete with quirky family members, outrageous friends, and comparisons of wedding dresses to meringues.

The woman in the dessert-like dress is Rachel (Piper Perabo, whose face is so precious to me I cannot bring myself to watch Lost and Delirious, since I am traumatized by the mere thought of her sadness). Rachel’s life is so perfect it makes even her a little nervous. She is beautiful, and a successful journalist (back when that was still a thing it was possible to be), and owns a large number of very cozy-looking sweaters. Her father is Giles (Anthony Head plays him as so stutteringly emasculated that for years after watching this I though he had a speech impediment). But he’s a great father, and he dances like a gibbon, as all fathers should.

Luce’s mother is somewhat shrewish, and spends the entire film complaining about her lack of sexual satisfaction, though clearly she got it on somewhat recently, because Rachel’s sister is like eight.

That’s H. Her thing is that she asks random questions, which would be an unbearably twee affectation were it not for the fact that the actress playing her is a genuinely odd child, who delivers all her lines as if she’s passionately interested in something happening just off-camera, and it is delightful.

We meet all these fine people on Rachel’s wedding day, on which she is marrying The Nicest Man In The World, Heck.

Heck is loving, and kind, and makes adorable jokes about jam. His sole fault is that he works at a job where he yells numbers, and those numbers are LIES.

I love that it is impossible not to be invested in Heck’s welfare, since one of my all-time least favorite lesbian movie tropes is that there are no emotional consequences to breaking some poor dude’s heart. That does a tremendous disservice to bisexuality and to the trauma of coming out while you’re in a straight relationship, and this is one of precious few films not guilty of perpetuating it.

Heck’s best friend is Cooper, that “trollop who would shag an open wound.” I think he’s just there so there would be another dude on the poster.

So it’s Rachel’s wedding day, and her florist is Luce (Lena Headey, a hawk goddess who decided to try a lifetime in human form, just for a laugh) who provides the residents of London with tasteful bouquets and free therapy. (“He was just a dog and you shouldn’t have loved him more than me” is still my favorite line in the whole movie.) More about Luce: her mother is depressed in the most British way possible, which she describes in terms of snooker and tea. And Luce’s best friend ecstatically gay Edie, about whom I would watch several movies, preferably action-comedies in which she has to steal artifacts or something.

Rachel is halfway down the aisle when she and Luce make eye contact, and in that brief moment, her life is blown to rainbow-colored smithereens.

They meet properly at the reception, where Luce goes punch-diving to rescue Rachel’s wedding ring.

After the wedding, Rachel and Luce start hanging out, because Rachel thinks that Luce is her soul mate. Not in an inappropriate way, just in the way where another woman is all you think of and you want to listen to your favorite songs on the same pair of earbuds so they can be her favorite songs too and you always have to try on three different shirts before you hang out.  You know, in a friend way. She’s already a little alarmed by the intensity of her feelings, and when she finds out Luce is gay, the equivalent of a hydrogen bomb goes off in her head.

The thing about forbidden love stories is, they have to pull you both ways between what you know is right and what you want with every fiber of your being. And that is accomplished in this film by the dueling forces of Luce and Rachel’s exquisite chemistry, and their shared anguish about hurting Heck.

Let’s go over their interactions:

1. Luce sits in the rain on the balcony, Rachel gives her a sweater. Adorable: 8 Guilty: 4.

2. Sitting next to each other at H’s science presentation (apparently in Britain, such a big deal that you make t-shirts and enlist the family florist to help) and ALMOST TOUCHING. Adorable: 10. Guilty: 9.

But then she and Luce go on The Greatest Date of All Time. Luce teaches her how to yell at sportspeople by imagining that her mouth is a vast cathedral, where Luce would like to worship for a thousand years.

And then they play Dance Dance Revolution, which SHOULDN’T EVEN BE ROMANTICAL, BUT IS! (For so many years of my life, I thought no one truly loved me because no one ever took me to an arcade where we both knew magical chorography.)

AND THEN, AND THEN YOU GUYS, they go on a walk home and Luce tells Rachel that the secret meaning of the lily flower is “I dare you to love me!” I always thought it was vaginal imagery or funerals but sure! Fine! Let’s go with that!

After that, Rachel makes one more last ditch effort to save her marriage by trying to have sex with Heck on a heath, but they are followed by two members of the homosexual mafia, who forbid Rachel from doing anymore straight stuff.

The next day, Rachel storms into Flowered Up (we’ve barely even touched on Flowered Up or the adorable old man who asks for herbs-with-an-audible-h, but there isn’t time now) and announces that she and Luce have simply got to stop making significant eye contact.

BUT THEN she storms BACK IN and kisses Luce full on the mouth and they roll among the flowers like Eve and Lilith before the fall of humankind.

As a nineteen year-old, that kiss was everything to me. It was like a treehouse my heart could climb into and pull the ladder up behind it. But the scene itself is unconscionably brief, because Luce gets THORNS IN HER BUM. Let’s all just join together in hating those thorns a minute, shall we? They are up there with the Westboro Baptist Church as enemies of the queer community.

So after that, Heck comes in all sad because Rachel is clearly cheating on him, and Luce and Rachel vow (for real this time) to stay away from each other.

And then there are five minutes of everybody sadly gazing out of windows. But when at last Heck realizes the truth, he acknowledges that the kind of love Rachel feels is a force that neither can nor should be stopped, and he gracefully steps out of the way.  9 out of 10 movies would have that be the end of Heck, but IM&Y takes the necessary step of acknowledging his sadness. It even makes you briefly fear for his life, until good old H comes along and says some words that I have never understood, but often repeated: “No problem is insoluble, given a big enough plastic bag.”

So Heck is okay, Rachel’s parents are going to buy some Viagra, Luce’s mom is dating again, but what about our main couple? Well, Luce is on the way to the airport, where she is LEAVING FOREVER. And even when Rachel calls her on the phone to say she wants to be with her, she won’t listen. So Rachel has to jump on the car roof, and the bike courier sings the song, and then YOU’RE A WANKER NUMBER NINE, and then kissing.

Imagine Me & You is not a “great film.” It asks you to believe in a lot of things I have never found to exist outside romantic comedies. Love at first sight, dances one knows without having to learning them, and a world where even the brokenhearted get happy endings. It’s a sugar-spun tale. But good god, don’t we deserve the daydream as much as straight girls? More, in fact, since our happy endings have been so hard-won for so long. Like a teddy bear you keep well into adulthood, I will always love and treasure this movie, even now that I no longer need it to get me through the night.

Sex Scenes: NONE. THANKS A FUCKING LOT, THORNS.

Eventual Fate of Central Couple: I see two kids, several pets, and even occasional dinners with Heck and the woman from the plane.

How Many Times Have You Seen It, Elaine?: All the time. If I am ever talking to you and my eyes glaze over, I am watching this movie in my head.