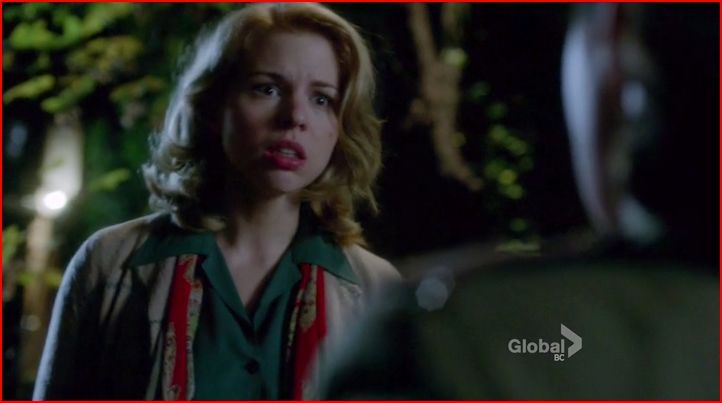 Meanwhile, Gladys’ date takes a turn for the creepy when Clifford stops the car next to a fog machine factory and tells Gladys to get out. And even though they called too much attention to it, kudos to Rachel Talalay and company for really capturing the paranoia of a good film noir.

Returning to one of my favorite storylines this week, Kate tries to rouse the silent soldier with an absolutely gorgeous rendition of “There is a Balm in Gilead.”  The song is about taking whatever you have and putting it into the service of God, and Kate’s case, her gift is the song itself.

The soldier cries and I cry and we are all about to cry, so if you have a little stuffed animal like the one Sheila turned away, I suggest you hold it tight.

Outside the Jewel Box, the louts from last night are waiting for Betty and Teresa.  They pick up Betty and drag her to the car, presumably to rape her.  I’ve certainly seen more violence on television, but I can’t remember the last time I was so afraid for a character.  And it’s hard to watch but I think that actually makes it a good depiction of violence; its suddenness and stupidity and terror.  I will say though, that the moment, like the exact second, I saw Vera round the corner, I knew everything would be okay.  And indeed, Vera gets some of her men to fight the assailants, and Betty is rescued.

Inside, Vera and Teresa tend to Betty’s severely banged-up face (second and hopefully last time this season she is bleeding), and when Teresa calls her “slugger,” a wave of understanding comes over Vera.

And then Teresa kisses her and calls her a hero and we should all be so lucky as to have a girlfriend who knows how to kiss around our bruises.

Back on the bridge of doom, Agent Cliff reveals that he is a spy of some kind and so is the red-headed lady.  They are both spies. For us. And they want Gladys to be a spy too.  Like an honest-to-goodness, decoder ring, poison tip umbrella, wait for your instructions, SPY.  It is the most perfect plot twist since Rosebud was a sled.  It doesn’t hurt that privileged girls with perfect hair being recruited into espionage is kind of my thing and I wrote a book about it.

Back at the Corbett residence, Sheila does that thing where she says something amazing and I hate that she’s not a bigger character.

Lorna: You can’t be with Dr. Patel.  He’ll never marry you.

Sheila: I don’t even subscribe to the patriarchal institution of marriage. All that matters is that he is a kind man with BEAUTIFUL HAIR.

Lorna: How could you have changed so much overnight?

Sheila: I’ve been changing for months! I just wasn’t in the past couple episodes.

She storms out and, rather, than reconsidering her judgments, Lorna invites Reggie to move in and replace her. P.S. nice personality transplant Reggie.

The next day, Betty goes into work with her face still black and blue, unsure if Lorna will order her off the floor.  As she passes the other workers, the whispers follow her, along with a shout of “who’d ya try and kiss?”

Sure enough, Lorna strides up to her and delivers the following speech, loud enough for all to hear:

Lorna: It is despicable. Here we have decent, hard-working women, giving their all for the war effort.  And yet they can’t walk this city’s streets without interference from good for nothing layabouts.  It’s a disgrace.  I hope, on behalf of all of us, that you gave those beggars every bit as good as you got.

And then Lorna claps and everyone claps and for a moment, nothing hurts.

So who’s with me: best episode ever?  I know this was a long recap, so thanks for bearing with me.  Now I’m going to faint or cry or just gaze at the ceiling in an ecstasy of love for this show.  And most importantly, I’m going to see you all (and Rosie O’Donnell!) next week.