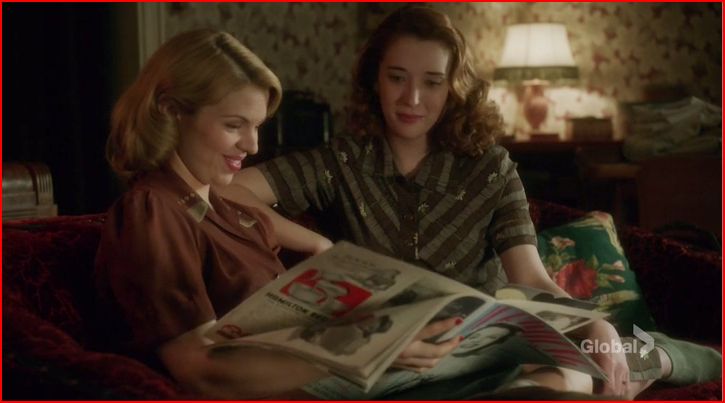 Keeping with the theme of male intimidation, Marco barges into Gladys’ hotel—which we learn is delightfully called “The Hedley”—to confront Gladys.  He is pretty physically threatening to our precious porcelain Ravenclaw, but Gladys never backs down. One wonders why she is so dogged in her defense of Marco, a character she’s never been particularly close to, but then one remembers the scarlet, all-caps tattoo of “JUSTICE” emblazoned across her heart.

Over at the Corbett residence, Dr. Patel comes by to try and explain the circumstances of he and Sheila and the girl in India’s Very Modern Relationship. Bob shuts him down with a minimum of bullshit, and tells him that if he likes it, he better put a ring on it. Nerendra flees like a puppy who has just been yelled at, but really, what do you expect when you tell your girlfriend’s father that you’re “very fond” of his daughter?

Upstairs, Head Girl Gladys Witham tries once more to dissuade “Clifford” from arresting Marco, but you get the sense he’s just using these little meetings in the hopes that they’ll be forced to kiss again.  He tells Gladys that, according the testimony of “some fellow named Ed,” both Marco and his father bleed brown (fascist reference FTW).  He tells her she can help stop the terrorists or protect her friend but she can’t do both, proving yet again how little he understands her.  Sir, this is Gladys Witham-Hastings, the woman who can have her cake and eat it too; she will simply order an extra cake and wonder why no one else ever thought to do so.  She steals Marco’s file and sneaks off to study it.

She tracks Marco down at Moretti’s abandoned firework factory and A. apologizes for being “a lousy friend,” which is ridiculous. And B. reveals that the “Ed” who informed on the Morettis is actually Enzo DiCarlo, a deductive leap “Clifford” was apparently incapable of making.  And seriously, this case was kind of a softball for Detective Witham, since the DiCarlos run a rival fireworks company and also are just generally the worst.

Back at The Hedley, “Clifford,” who I am so glad we have all agreed to hate, comes over with a bottle of champagne, believing that Gladys has finally succumbed to his icy charm.  Instead, she pulls Marco out and demands that the two of them work together to bring down the fascists.

Over at the Corbetts, Sheila (who is looking very pretty this week) comes in hollering about how Dr. Patel broke things off with his Indian fiancé out of a sheer terror of Bob, which is not at all the way she hoped to snag him.  And even though she’s a small character, I never cease to be amazed at how Sheila is the most rational person on this show.  She’s like the one sane member a Real World cast who is just there for the free rent and wishes everyone would stop fucking in the hot tub.

The next day, everyone is prepping for the arrival of the Earl of Somethingshire, and it must be a Canadian thing because I just can’t get excited about it. Getting excited about it for me is Carol, who if fangirling SO HARD about this royalty business. And if I never get the chance to say it again, I want to say it now: Carol (and Carlyn Burchell) is a fantastic character and the perfect foil for Vera, and I want them to go on antagonizing each other forever, or until they give in to their obvious sexual tension.

Ivan asks Betty why Kate is being such a weirdo about her family, and Betty desperately tries to throw him off her scent.  Man, Betty has a crummy storyline this week.

At the abandoned firework factory, Marco gets Frankie and Mahoney arrested, and pauses for a moment to ask his childhood friend how he could betray him.

In the closing scenes, Lorna and Bob Get It On and Gladys pretend-flirts with “Clifford” (oh please oh please just be pretending to flirt with him, Gladys).

Oh and also, KATE’S MOM SHOWS UP.  That’s right, Mrs. Rowley has been alive this whole entire time, which I guess is great or whatever, but it means that Kate’s past has finally caught up to her.

And sure enough, next week it looks like Kate and Betty go on trial in a season finale that may also be the series finale.  If you’d like to help fight for Bomb Girls, I would highly recommend following @SaveBombGirls on Twitter, checking out this fan-created forum, or signing this petition.

So, hopefully not for the last time, see you next week.