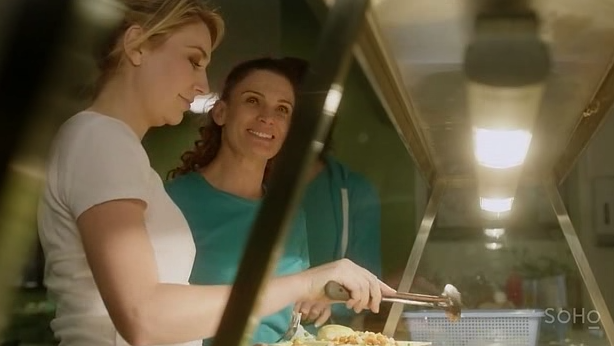 That afternoon, Bea is getting excited for her daily rendezvous with Allie, oblivious to The Freak’s noose tightening around her neck. First, Kaz stages a distraction by accusing Bea of being a bad friend to Maxine and abandoning her in her hour of need.

While Kaz rants, Joan slips Bea her roofied drink. Next, Bea goes to wait on Allie in their special room, though she is already feeling a bit woozy. And Allie herself is distracted by Kaz, who demands that everyone join a sit-in to protest Maxine’s treatment.

And so there is no one around when Joan locks Bea in the closet and patiently waits for the drugs to kick in.

There were a lot of ways Joan could have incapacitated Bea, but I think roofies were a very powerful, deliberate choice. Because even though it’s not sexual violence that Joan intends to inflict, you can’t watch Bea slowly losing control of her faculties without seeing all the powerful women laid low by spiked drinks. Any version of Bea isolated and vulnerable would have been terrifying; this one is also devastating.

Once Bea has stopped struggling, Joan comes in and begins to slowly, methodically fill a sink with water. (I am in awe of Pamela Rabe in this scene.) As she does so, she delivers one of the most chilling villain monologues of all time, in which she asserts that she is really doing Bea a favor. Because what’s a life in prison, anyway? It’s either a quick, bloody death or a long, slow one. Everyone Bea loves will leave, promise to keep in touch, and fail. It’s horrible because, of course, it’s true. But it would be equally true even if it weren’t delivered in a prison, since everyone on Earth is really just a lifer, trying to steal a few kisses in between catastrophes.

That’s the lesson Bea really learned from Allie. That the moments of happiness are worth fighting for even when hopeless outcome is assured. So she keeps fighting, struggling against Joan’s gloved hands. Unfortunately, not even Bea is strong enough to lift her drugged head out of the water, and so she begins to drown.

But take heart! Elsewhere in the prison, Joan’s prosecutor shows up with a tape recording that reveals that it was Joan, not Bea, that turned in the Red Right Hand. Will hears this and takes it straight to Kaz Proctor, who realizes how utterly she has been used. She and Allie spring towards the kitchen.

They arrive…is it just in time or is it too late? I don’t know! Bea’s eyes are wide open, and her chest is still. While Allie and Will try to save her, Kaz attacks Joan like an angry blonde mongoose. And in the struggle, she forces Joan’s arm into the deep fryer, scalding off all her skin.