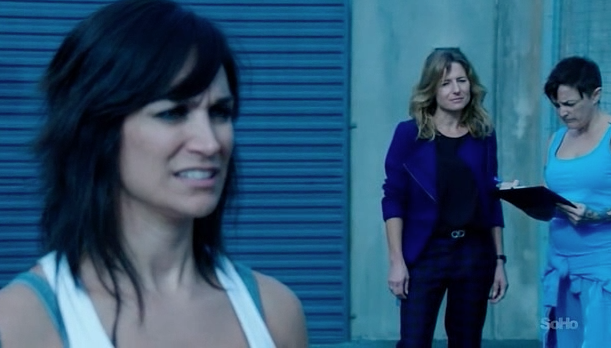 Quick, someone tell Pete McTighe it’s safe to approach the lesbian blogger community again. For the third episode in a row, Wentworth has been sharp, versatile and intense. It may not have the magic that made me binge watch the first season through a shroud of tears, but it’s back on solid ground. The promo this week was tricky for promising a Bea-centric episode. What we got was ensemble-oriented drama, which is fine since all the characters are shifting positions on the great blue chessboard that is Wentworth prison.

So here’s where we last left our inmates: Liz was afraid she passed her alcoholism to her daughter Sophie and prayed only for a chance to be close to her again, not knowing that god has a wicked way of taking prayers like that very literally. Franky was forced to perform sexual acts on the Wario version of Big Boo (whose name is Lucy, not Billie—sorry about that), while receiving only slightly more welcome attentions from Bridget, the new counselor.  Meanwhile, unspecified yet terrible things were happening to Jodie at the gloved hands of Joan “Earning Her Nickname This Season” Ferguson. What else? Will was accused of Harry’s murder and Bea had a weird, but up ‘til now innocuous, fan club.

This week kicks off with one of those scenes where ultra-violence is mashed up with a happy scene. A gang of masked women beat up a man we don’t know to a tune that sounds like it was ripped straight from “Sleepytime for Little Ones.” (Sidebar: I read an interview with Bill Withers recently where he said he refused to let “Lean on Me” be anybody’s ironic violence soundtrack, and I was like “Good on ya, Bill.”)

I was half expecting the masked women to be our inmates, but once the scene is over, it’s not referred to again for a long time.

We cut to almost as big a non sequitur: Will and Rose the hot doctor getting it on. (For a second I thought it was Will and Bea and I was like “FINALLY.”)  I’m not really sure why the scene is necessary except that Robbie Magasiva is contractually obligated to show his chest for thirty seconds every episode to appease the half of the audience that isn’t interested in Franky’s chestal area.

The next day at breakfast Jodie returns from the slot, looking like she was just forced to listen to the collected works of Rick Astley on repeat.

Most of the prison is convinced that she got caught trying to steal Franky’s drugs, but Franky herself isn’t so sure.

Oh and also at breakfast, Lucy makes the waggle tongue at Liz who tells her that “Hep-C infected lezzos” aren’t her type.

Y’all, I am straight up going to quit this glamorous life of TV recapping and become an Australian prison guard. I say this because Fletch and Will’s houses are both so fucking nice. (Vera’s presumably still lives in her mother’s spinster dungeon and Joan for 100% sure lives in a giant working model of the game Mousetrap). Will and Rosie are holed up in his bed when the police come a’knocking. With a battering ram. They are there because Will’s DNA was not found at Harry’s murder scene, but the police suspect him anyway. Rosie, for her part, is getting a little tired of all the drama.