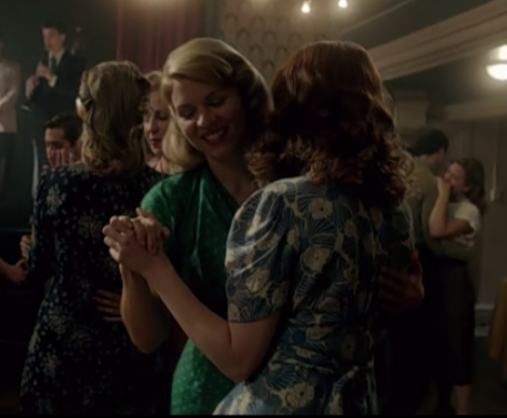 (This recap was originally published on September 12, 2012. It was my very first one!)

Hello and welcome to Bomb Girls, a show about Canadian factory workers during the Second World War. But wait! Come back! While this might sound like a figurative as well as literal bomb at first, you dismiss it at your peril. At its best, it has elements of Mad Men’s textured vintage style and Downton Abbey’s sugary soap opera, mixed with a bracing tablespoon of social commentary. These are obviously lofty comparisons, and the show falls short of them often in its freshman season, but it does have one claim on our affections no other can offer.

This is Betty, the embodiment of all that is good and plucky in this world, and our Very Own Canadian Lesbian. Soon you will either want to be her, be with her, or like me, a pleasantly confusing combination of the two.

Now that I have your attention, one of the primary assertions of Bomb Girls is that a de facto sexual revolution took place in North America during, and largely as a result of World War II. Throughout the season, we see all the female characters struggling with their newfound sense of sexual agency. The show kicks off with two scenes which highlight the burgeoning sexual desires of two very different women. In the first scene, Kate, lovely and doe-eyed, is singing hymns to oblivious sinners on a street corner, when a cartoonish blonde scampers up and starts kissing soldiers like a defective machine gun, spitting bullets at random. Kate eyes sparkle with longing as though she would like nothing better than to steal this lady’s red heels and sprint off into the night.

Her fantasy is rudely interrupted by her father, a hellfire-breathing street-preacher, never a profession that attracts the more rational or forward-thinking element of society. He lays a way-too-rough hand on her and puts on a little hat that says “villain.”

Next up we have Gladys, heiress to a lunchmeat fortune (or something), who seems to have gone a bit farther down the path to sexual expression, as she has pushed her fiancé against a book case, and is hard at work on his zipper. He begs off these advances, LITERALLY because her gargantuan diamond ring might cut his tender bits (insert lunchmeat joke here).

Kate, meanwhile, adopts a fake identity with help from her mother, and runs away to escape her abusive father.  She winds up, as all great heroines must, at an all-girl boarding house. It is here we first meet Betty, the patron saint of high-waisted trousers, striding into our hearts forever with a cigarette and a scowl.

She quickly assists Kate in a little display of door-fixing brute strength, and then retreats back behind her curtain.

The next morning, all our gals show up for work at Victory Munitions, and the real action begins. They wait in line outside the factory, puffing cigarettes as if they contain a gaseous form of pure joy (do not watch this show if you ever plan to quit smoking), and Betty asserts her status as Badass-in-Chief by talking a little good-natured trash about the “new girl,” Kate, and the “rich girl,” Gladys. Gladys is desperate to fit in with her new, working-class cohorts, and there is a decided twinge of sexual curiosity to her foray into the 99%. I mean, the way her voice drops three notches when telling one of the women she has “beautiful hair,” I know I’m not the only one who noticed.