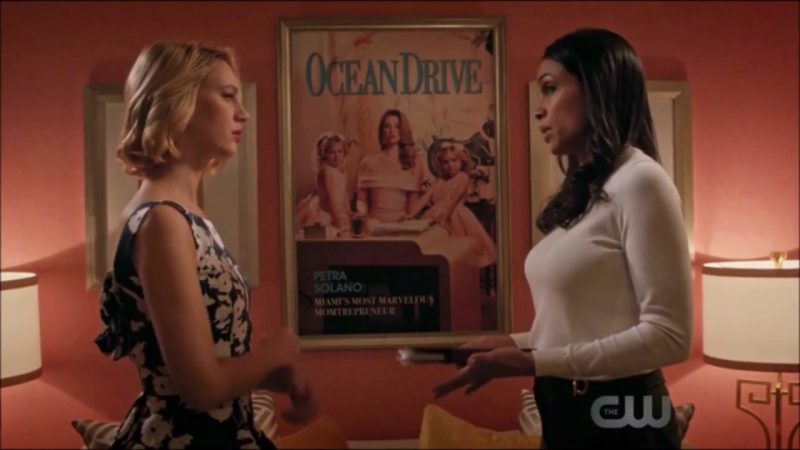 When I first heard that Jane The Virgin’s Petra Solano was entering into a queer relationship Jane Ramos, a character played by Rosario Dawson, I thought I had slipped free from our dreadful reality and entered a better timeline. Sadly, the ice caps are still melting and the abscess is still President, but this tiny bright spot of a storyline is so glorious, you may actually manage to forget about the rest of the world while you bask in its glow.

For the uninitiated, Jane The Virgin has been one of the best, smartest, and most feminist shows on TV since its premiere. Now in its fourth season, the show follows Jane (Gina Rodriguez, who has the world’s most perfect laugh), her family, and her love interests through triumphs and tribulations that pay homage to the telenovela form in a way that is so kind-hearted and unpretentious that it would be easy to miss its self-aware brilliance. (Just to make sure you don’t miss it, the narrator kindly draws your attention to the storytelling conventions at work every once in a while.)

Petra Solano (Yael Groblas) has long been Jane The Virgin’s wild card. She started out as a villain–the cunning ex-wife of one of Jane’s main men–but like Buffy’s Spike, or Glee’s Quinn, she proved too charming to despise, and so has been folded into the main ensemble, where she fights on the side of good roughly seventy percent of the time.

Petra is notoriously unlucky in love, with trust issues stemming from her conniving mother, her difficult upbringing as a street violinist in the Czech Republic, and her evil twin sister (I told you it’s a telenovela; roll with it). Men have come and gone in Petra’s life, but her view of relationships tends to be (as the show itself pointed out) firmly transactional.

Queer women, naturally, saw this beautiful but wounded woman, whose reservoirs of tenderness no one had yet managed to access, and thought: this is a prime recruitment opportunity. Fans have been clamoring for Petra to have a queer storyline for ages (preferably with Jane) but never had we allowed ourselves to dream that she would first know the ecstasy of boob-on-boob contact with ROSARIO FUCKING DAWSON, the personification of everything salvageable in the human concept.

Dawson plays Jane Ramos (which Petra abbreviates as JR), a defense attorney representing Petra in a murder investigation (the third? fourth? time Petra has been suspected of murder). Like Petra herself, Jane Ramos is smart, driven, and bold. Unlike Petra, JR is a little wary of sleeping with a woman who’s only ever been with men, and also is her client in the whole murder thing. Thankfully, neither of them have the judgment or impulse control to let this stop them very long.

Jane Ramos and Petra have exactly the kind of story we always want to see: they both challenge and support each other, their attraction is stretched out long enough to leave audiences salivating for it, and they have an urgent, desperate chemistry that the writing and editing feeds, rather than stifles. Especially when compared with Riverdale, which tossed its long-awaited queer storyline at viewers with a lamentable lack of joy, care, or conviction, Jane The Virgin is doing everything right.

Of course, we certainly won’t stay in this honeymoon period forever: this is a telenovela and Rosario Dawson is doubtlessly busy being perfect in every way. The seeds of conflict in this relationship have already been sewn. Without giving away too much information, JR is faced with divided loyalties and conflicted morality, is possibly tied to the show’s other queer female villains, and her very name clearly lends itself to a “who shot JR” twist. But we can prepare ourselves for these likely outcomes without having to worry about being betrayed by them, which is a crucial distinction, and one this show has earned by building up several seasons’ worth of trust.

For many years, it was enough for queer viewers to have representation at all, but now the time has come when we may be so bold as to demand good representation. That means queer storylines that are given every bit of the importance and heat as their boring straight counterparts. So listen up, showrunners: we are no longer awarding points for effort. Going forward, we will be holding you to the Petra-JR standard.