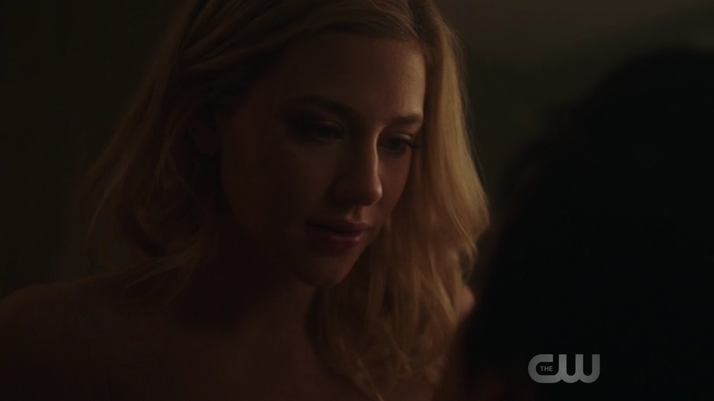 Heya folks, and welcome back to Riverdale. I’m sorry this recap is late, but I was struggling mightily to articulate exactly why the past two episodes have ranked as failures in my book; to describe the ways they failed.

Was it Riverdale’s tendency to start with an idea for an elaborate set piece and then build the action around that, rather than character development? (In this case, the set pieces being the confirmation duet and the poker game.)

Was it the fact that we’ve been focusing heavily on Jughead and Archie at the expense of the female characters?

It’s at least partly the issue I’ve called out before: the way this show’s writers try to throw every ingredient they love into the pot–camp, musical, horror, social commentary, homage to seventy years’ worth of cinema—with the result being a sort of undifferentiated poutine.

But then I remembered that I have been recapping TV shows for a very long time, and I have sat through slumps before, and I have faith that Riverdale will emerge from this one. It still has a lot going for it: gloriously barbed dialogue and actors with the skills to deliver it, a visual style that makes even bad scenes fun to watch, and of course, Cheryl Blossom and her burgeoning queerness, which they CAN’T KEEP FROM US FOREVER. Riverdale is still a young show, and its puppyish enthusiasm sometimes leads it astray. But like a puppy, you have to trust that it will eventually come bounding back to you, oftentimes just as you’re threatening to walk away.

In the meantime, let’s get through this episode and on to the next one.

First up, Jughead and the rest of the Serpents are suspected of decapitating the statue of Riverdale founder/war criminal General Pickens and making off with its head. Jughead protests that he couldn’t have hacked off a bronze head, because his feeble little arms are suitable only for penning impassioned editorials. Nevertheless, Mayor McCoy and Sherriff Keller still use the suspicion as an excuse to serve the Serpents with eviction notices from the trailer park. Principal Weatherby also suspends Jughead and Betty from the school paper, because he has never yet missed an opportunity to take the side of anyone other than his students. As if that wasn’t enough, the Serpents also turn on Jughead, which shocks him, despite the fact that they’ve been doing that every week since the “let everyone punch you” initiation ritual. 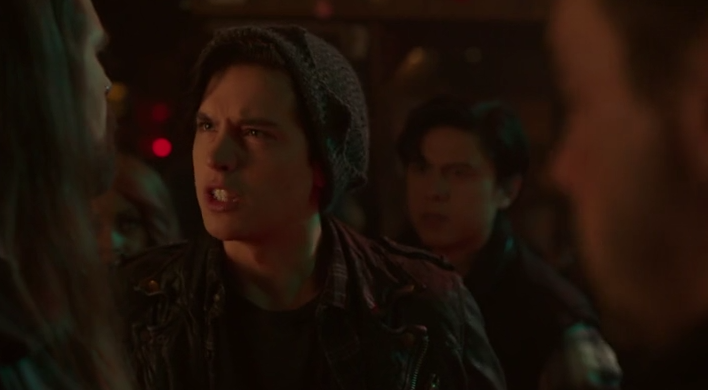 BUT I THOUGHT AFTER THE LAST TIME YOU MADE ME PROVE MYSELF, I WAS FINALLY IN! 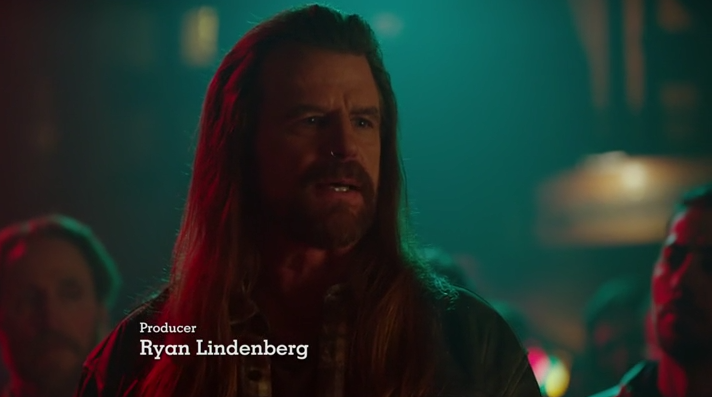 This latest revolt is headed by Tallboy (who, this episode reminds us several times, is tall) and Penny Peabody, who returns with a big scar and a scary story. 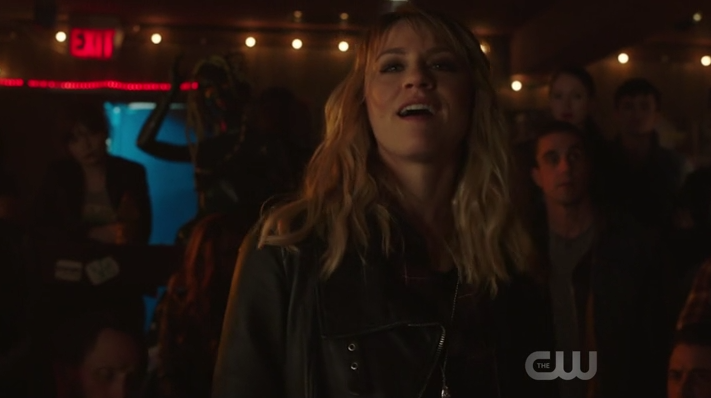 WITH EVERY NEW SCAR, THE CHICKS ONLY DIG ME MOOOOORE.

I really thought last week had caught us up on all we’d missed during the Christmas episode, but apparently EVERYTHING HAPPENED during the Christmas episode, and we’ll still be learning about all the various ways everyone briefly took leave of their personalities for years to come. Case in point: it seems that Jughead and ran into Penny on the road to Greendale, and cut her tattoo off.

So that’s incredibly alarming. Remember that thing I said about Riverdale being like a wayward puppy that I would forgive once it came back to me? Well, that’s only true up to a point. If my dog trotted up to me with a LADY’S TATTOO in her mouth, I would be like “fuck, I don’t know if I can let you sleep in my bed anymore.” It’s just so far out of character for Jughead, so horribly violent, that I’d really prefer to pretend it never happened, which we could have done if this stupid lawyer character didn’t keep coming back like a bad…her name. Penny says she’ll solve the Serpents’ eviction problems on the condition that she is allowed to cut Jughead’s tattoo off “with a dirty knife,” which I feel kind of goes without saying. Gangland mutilations are rarely performed with a sterilized scalpel, in my experience of the world.

Jughead is desperate to find the statue’s head and escape eviction/tattoo removal/being kicked out of this stupid gang which has never made him anything but miserable. He enlists Betty’s help and: surprise! They find the head. It was removed by Tallboy himself, for reasons which he articulates in a remarkably thorough confession. 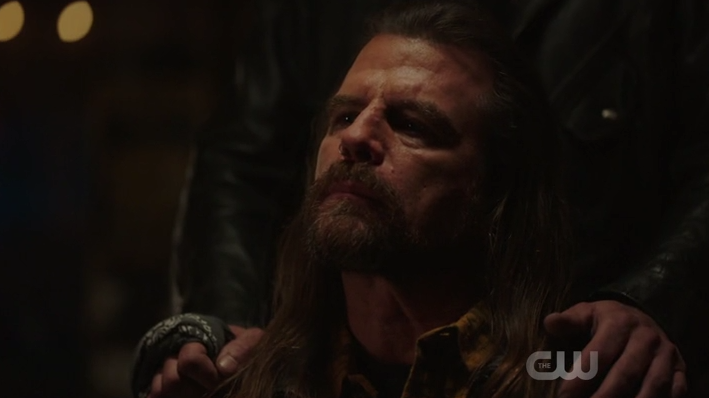 AND I WOULDA GOTTEN AWAY WITH IT TOO, IF I’D JUST KEPT MY MOUTH SHUT, GIVEN THAT THE ONLY INFORMATION YOU HAD WAS THAT THE PERPETRATOR WAS “TALL.”

So Tallboy and Penny are exiled and Jughead and F.P. are the de facto Serpent leaders. So what, exactly, did this whole saga accomplish? What did we learn? I’ll let you answer that for yourself.

Next up, Veronica has her confirmation. Yes, it’s about five years late, but the show couldn’t resist the drama of dressing her as a bride and renouncing satan, and the Lodges had to wait until they could get this particular Monsignor, who really has that personal touch. 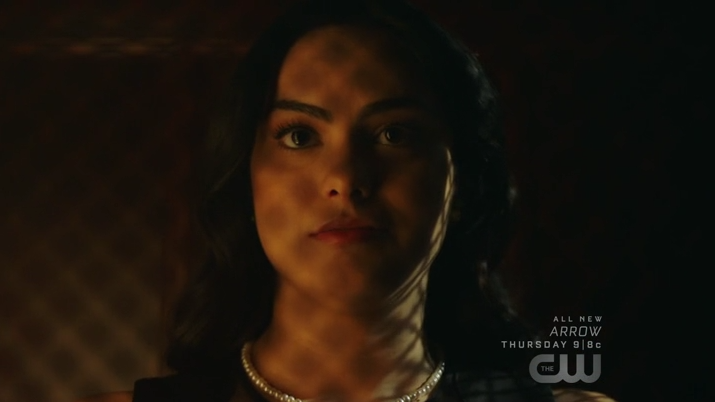 I’M JUST WORRIED THAT I’M DRAGGING ARCHIE INTO A LIFE OF SIN. 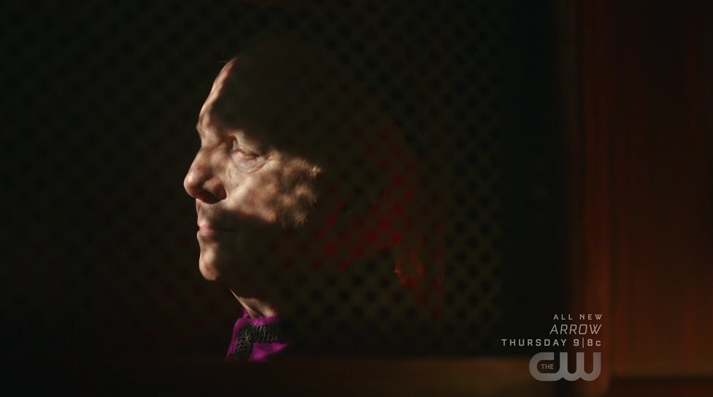 THIS IS THE ONE SCENE YOU COULD’VE STOLEN AND YOU *STILL* MADE IT ABOUT ARCHIE.

It would be super cool to see Veronica grapple with what it means that her dad is a crime lord and her mom is either a willing participant or living in fear of him. Veronica herself has been taking a much more hands-on approach to the family business, but you’ll notice we never see what that looks like! Instead we are lavished with scenes of… 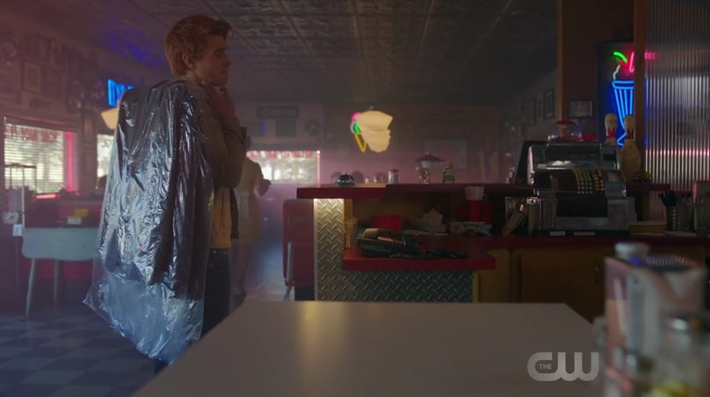 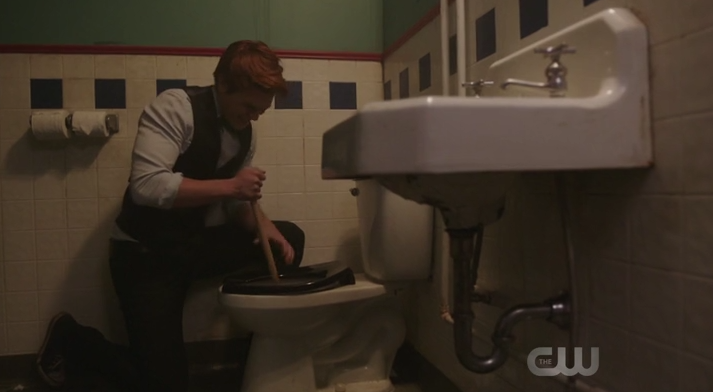 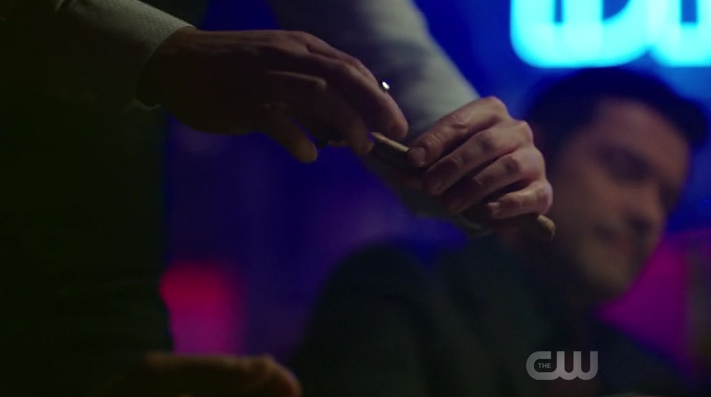 Archie, of course, is doing double duty as Hiram’s intern and an informant for Special Agent Jared Kushner, who keeps pressuring him to dig up more dirt on the Lodges. 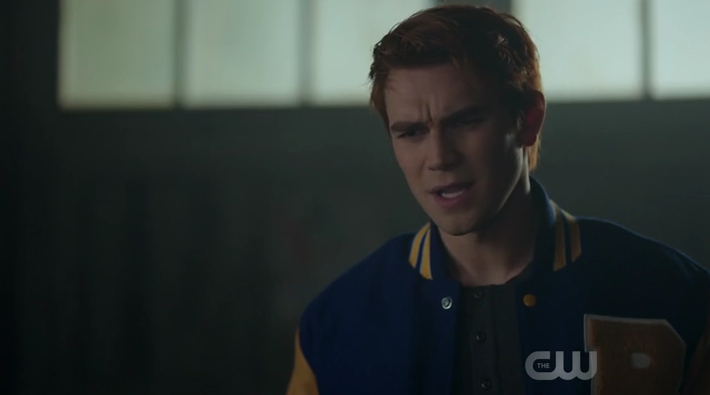 DUDE, YOU CAN’T JUST SHOW UP AT MY HOUSE IN THE MIDDLE OF THE AFTERNOON! 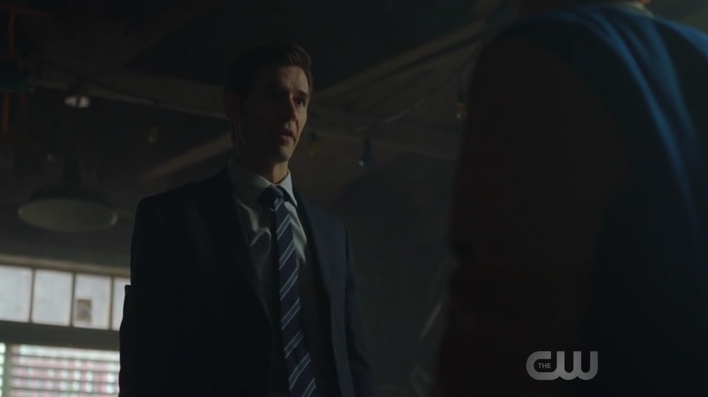 WELL IT’S KIND OF HARD TO FIT YOU IN BETWEEN SOLVING THE MIDDLE EAST, COOKING FOR IVANKA, AND TRYING TO FIGURE OUT HOW TO DELETE ALL MY RUSSIA EMAILS.

When Hiram hears that Archie beat up Nick St. Clair he is duly impressed, and asks Archie to assist at a high-stakes poker game with his Crime Family, headed by Quebec’s most ruthless purveyor of hot dogs and felonies: Papa Poutine. 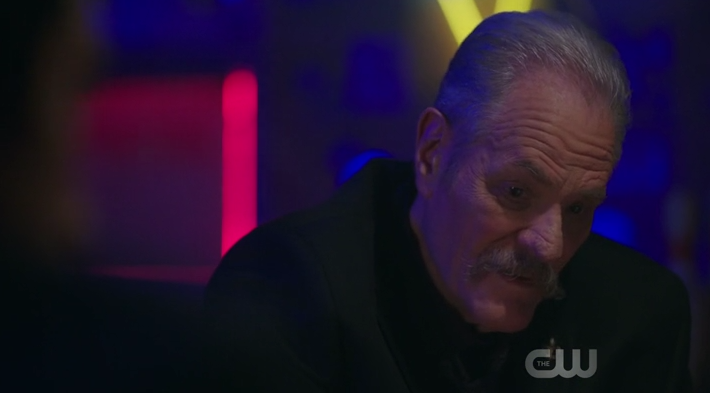 MY CURDS SQUEAK BUT MY VICTIMS SCREAM.

(Sidebar: what with poutine and maple syrup, this show really is obsessed by the overlap of criminality and French-Canadian foods.)

Anyway, Archie overhears Daddy Wetfries LOUDLY DECLAIMING his intentions to murder Hiram, and then inexplicably waits an entire day to warn him about it. Nevertheless, warn him he does, thus averting a disaster on the day of Veronica’s confirmation. (Other than the confirmation itself, which is also a catastrophe all its own.) 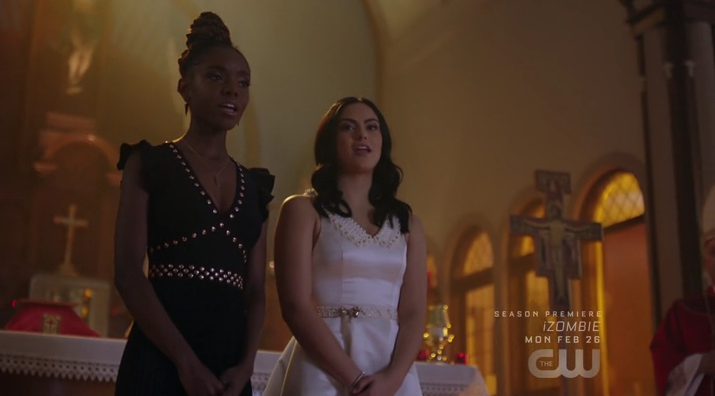 THIS IS WHAT IT SOUNDS LIKE WHEN DOVES JUST GIVE THE FUCK UP.

Prior to the ceremony, Veronica invites/coerces Josie to duet with her, with the immortal line: “Do you know Bittersweet Symphony from the Cruel Intentions soundtrack?” which makes me feel as old as my parents probably did in 1997 when The Verve ripped off the Rolling Stones. 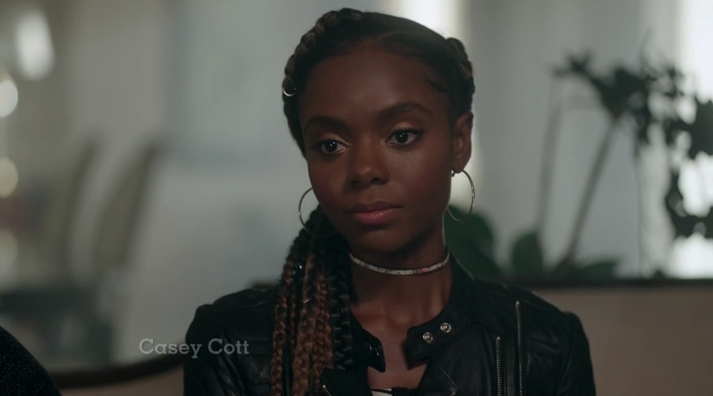 DO YOU KNOW “SAY NO MORE, MON AMOUR” FROM THE EMPIRE RECORDS SOUNDTRACK?

During the confirmation, Veronica hallucinates that her parents are both Satan, but Archie represents goodness, so by letting him into her heart, she’s kind of secretly marrying him! Yikes!

Veronica ultimately decides that she doesn’t want Archie to be brought into the Lodges’ criminal undertakings, a decision her father respects, though he assures her that it is “forever,” which is hilarious in a show where we have established that EVEN TATTOOS can be scraped off when one tires of them.

Finally this week, Betty becomes a webcam girl, forgives Jughead for his world of bullshit, has sex with him (a first for them both), and solves the mystery of the missing head! She’s always so busy, our Betty. 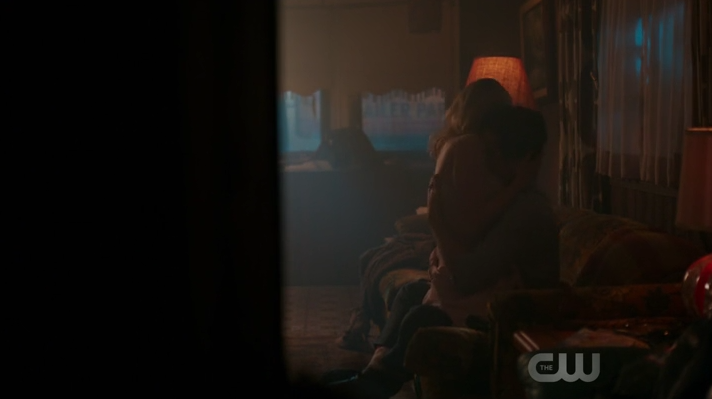 THIS SCENE IS GIVEN LESS EMOTIONAL WEIGHT THAN “INTERVIEW WITH THE JUNKYARD MAN!”

At one point, Alice performs a crazed rendition of “Be Our Guest” for Chic, who nervously asks “so…where is the rest of the family?” And Alice has to explain that Betty is always running several simultaneous projects, and he shouldn’t feel bad that she’s moved on from him. As for Papa Cooper, he has moved out, as he sometimes does when a child appears or disappears, or they disagree over the editorial tone of the town paper. Nothing to worry about. But then something to worry about appears, in the form of a perfectly cast sleazebag. 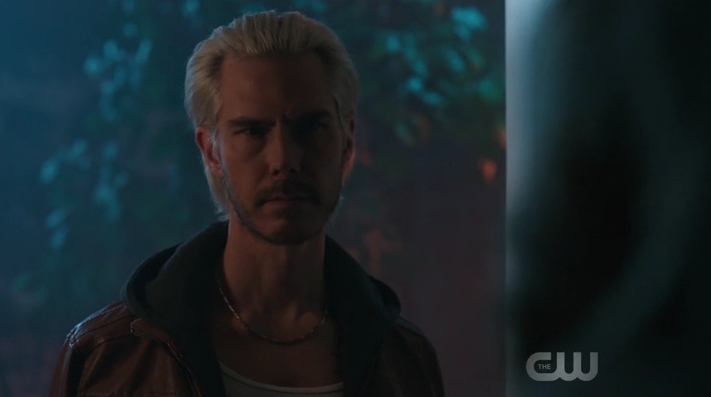 When Betty arrives home, she finds this gentleman dead of a head wound on the living room floor! I know! No one is more surprised than Betty! 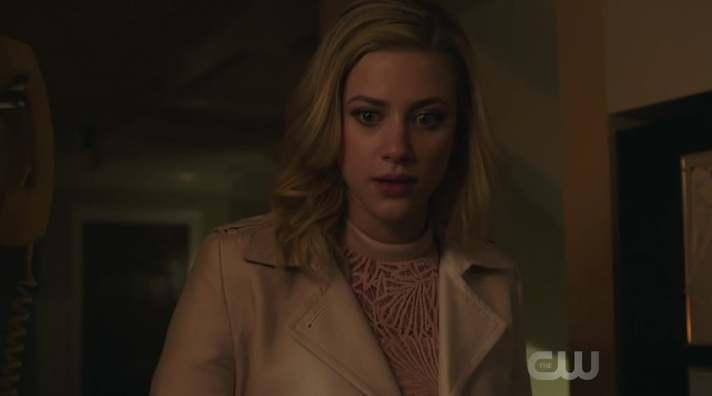 OH MY GOD MOM, DID YOU KILL SOMEONE? 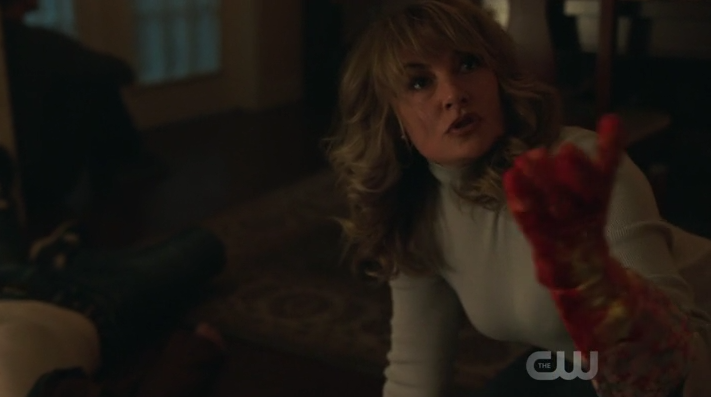 OH MY GOD BETTY, CAN YOU GRAB THE FUCKING SWIFFER?

See you next week when Betty and Alice have to hide a body and we witness the merciful return of Cheryl, not a moment too soon.