As every queer woman who has ever logged on to Netflix knows, lesbians are rich in tragedy. The typical story arc for women who love women in film and television goes something like this:

Of course, there’s nothing wrong with tragedy. It is, to quote my favorite line from The Way We Were, “so true to life.” But sometimes, we all just need to sit down with a story in which we are assured of a happy ending. Straight women have that with romantic comedies! Straight men have that with porn! And queer women are entitled to a little goddamn rosiness too. So if you’ve ever waded through a three-hour YouTube binge of a Spanish-language soap opera only to have your heart broken when one of the heroines is shot to death (ISN’T IT FUNNY HOW THAT DESCRIPTION COULD REFER TO MULTIPLE SHOWS?), here is a list of stories that will be gentle on your heart, for those days when you just want to wrap yourself up in a narrative like a warm blanket. 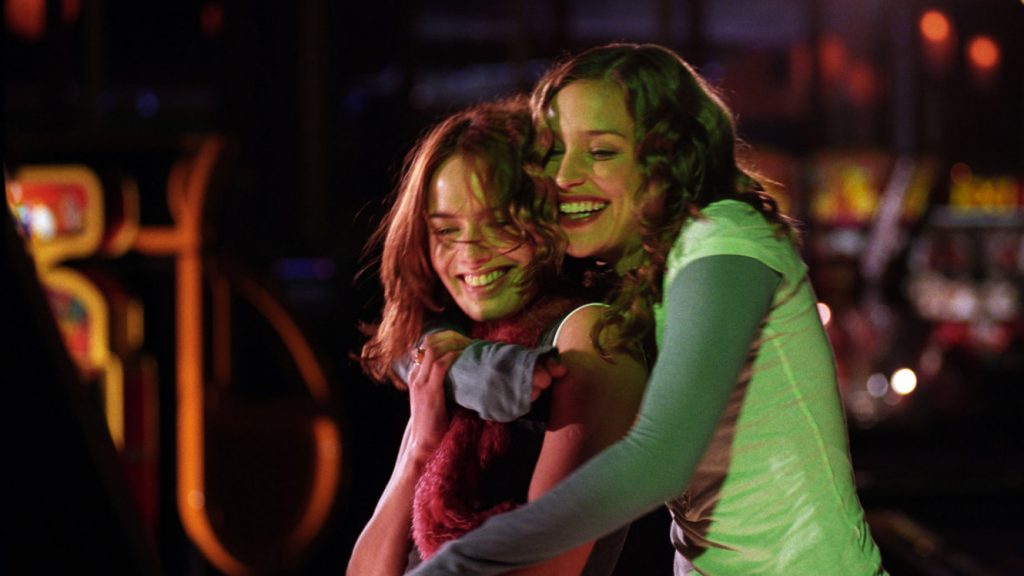 This is an obvious first choice, but that’s only because 12 years after its release, it’s still the undisputed champion of queer romantic comedies. (All the more incentive for people to get around to making some more good ones.)

Imagine Me & You (& Him & Him & Also My Parents ) belongs squarely in the great British rom-com tradition of Four Weddings and a Funeral and Notting Hill, meaning that everyone in it is clever and wealthy and in possession of a great many scarves. The film doesn’t really add anything new to the age-old template of a woman lured out of a heterosexual relationship by a beautiful stranger, but it checks the boxes with uncommon polish, kindness, and joy. For a generation of queer women, the vocabulary of this film–lilies, proper shouting technique, and Georgie’s Bush–will forever be inextricable from our concept of love. (We are also probably the only demographic who see Lena Headey as a florist first, and the iron-hearted queen of Westeros second.)

Happiness Quotient: Through the dang roof. You are assured of the well-being of every single character in this film before the credits roll.

Sexytimes Quotient: Just about zero. Lena Headey and Piper Perabo are bursting with chemistry, but never get around to removing those tasteful scarves. Still, it makes it a safe bet to watch with family or friends.

Where Can I Watch It?: Available for purchase on Amazon, YouTube, or ITunes. 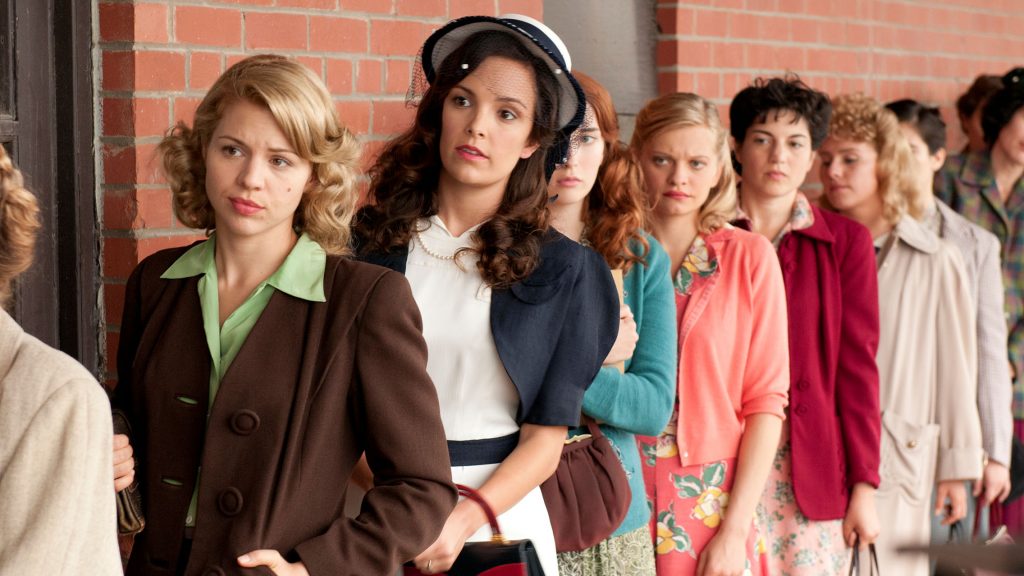 Canadian TV, much likes the country it hails from, has a reputation for being a bit kinder and gentler than its American alternatives, and it’s given us some of the best queer representation of the last decade with Lost Girl, Wynonna Earp, and Saving Hope. But there are few shows that hit your heart like a mug of cocoa quite the way Bomb Girls does. The drama follows the women of Victory Munitions as they do their part to fight the AXIS powers, while also fighting for the right to steer their own destinies. It’s bursting with admirable female characters, but none more so than Betty McRae (the queer-IRL-not-that-it-matters-but-it-kind-of-matters Ali Liebert), who is the character you had pegged as a lesbian the second you saw this picture. Betty is just your bravest heart come to life, and even though she has her share of hard knocks (and a painfully relatable straight girl crush), watching her weather it all is guaranteed to make you feel stronger.

Happiness Quotient: It’s a show, so there’s always drama, and it’s a show set in the 1940s, so it’s not like the factory throws Betty a coming-out party, but there’s a rare, honest core of optimism that runs through even the darkest moments.

Sexytimes Quotient: No spoilers, but stick around for season two, okay? (Maybe skip the made-for-TV movie, though.)

Where Can I Watch It?: If you’re lucky enough to live in Canada, you can stream episodes on the network’s site in between your free doctor appointments. Otherwise, you’ll have to spring for the DVD or petition Netflix to put it back online. 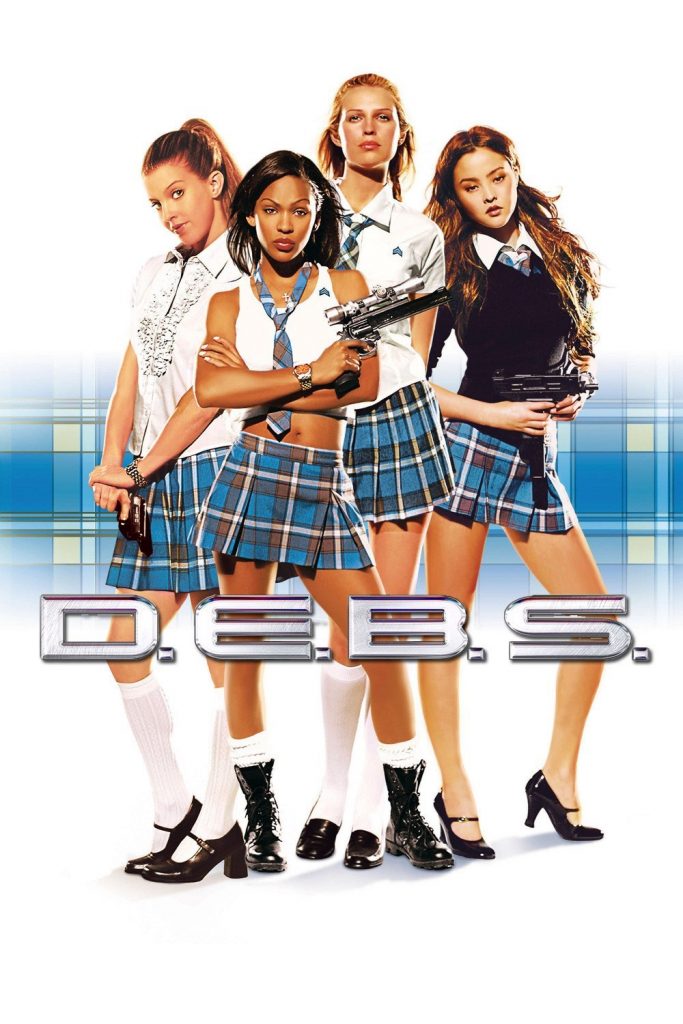 The late 90s and early 2000s produced a slew of relentlessly upbeat queer movies, marking a sweet spot in which lesbianism was beginning to enjoy some cultural acceptability, but was still far enough outside the mainstream to make boob touching seem an inherently radical and dangerous act. Of these, D.E.B.S. is the most endearingly exuberant. The story follows Amy, a student at an elite school for super-spies (whose actions are both top-secret and front page news). Amy is on track to be their valedictorian until she sets eyes on supervillain Lucy Diamond (Jordana Brewster, who would probably cause me to reconsider my notions of good and evil if she were sitting next to me too).

She kidnaps Amy (multiple times), shoots arrows into her home, and threatens to blow up Australia, but good luck trying to hold any of that against her, or any of this movie’s flaws against it. The plot is ridiculous, the sight gags are plentiful, but the heart is real.

Happiness Quotient: Watching this movie is like drinking a Fruitopia spiked with Ecstasy and then running around a laser tag course with a girl you really want to kiss.

Sexytimes Quota: They do that whole “under the covers with our bras on” thing. But still, writer-director Angela Robinson has served us more than our fair share since then with The L Word and Professor Marston and The Wonder Women.

How Can I Watch It?: You can pay to stream it on YouTube or Amazon.