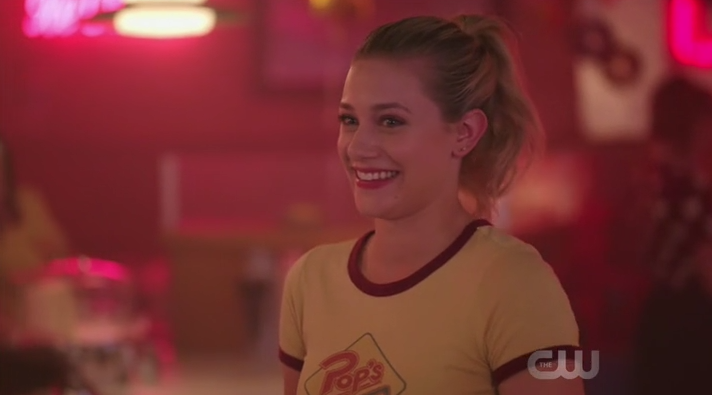 First of all: JINGLE JANGLE. I’m going to circle back to that name later on, but it felt dishonest to open with anything else. Before we can get to it, let’s get brought up to speed (speed, in case you didn’t know, is one of the top eight ingredients in Jingle Jangle, along with Cialis and Splenda).

When we left off, Ms. Grundy had just robbed her last cradle, and was murdered in her home by the same masked vigilante who shot Archie’s dad (and who I am still very certain is Betty’s dad). Seeing his father gunned down in front of him was incredibly traumatic for poor Archie, and though it looks like Fred Andrews will recover, Archie has taken to guarding the family home with a baseball bat in case the killer comes back. In other news, Jughead’s dad is behind bars and Jug is exploring a trial membership in the Southside Serpents. But as the old proverb says: when one dad is imprisoned, another is released, so we’re welcoming Veronica’s father to Riverdale, seemingly to usher in a new era of white collar crime led by both Veronica’s parents.

This week’s episode primarily revolves around the gang’s attempts to save Pop’s Chocklit Shop, which has suffered a downturn in popularity since Archie’s dad was shot there (though this may also be attributable to Pop’s newfound habit of speaking like a deep fried Edgar Allen Poe). At any rate, the possible closure of the diner comes as a major blow to Jughead, who is already facing the possibility of losing his father, is till mourning the drive-in theater, and for whom the recent revelations about American cinema are no doubt very painful. 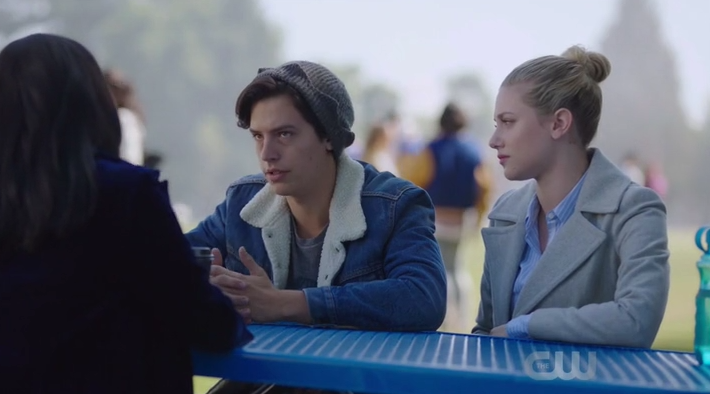 I HAD ALREADY STARTED WRITING THE DEFINITIVE WORK ON QUENTIN TARANTINO’S FEMINISM AND NOW IT’S RUINED IT’S ALL JUST RUINED.

In an effort to cheer Jug up, Betty decides to take up Pop’s as her crusade du jour, and Veronica joins her, mostly so she can avoid spending time with her parents. First, Betty appeals to Mayor McCoy, who refuses to help because she is a mean, bad person. (I say this partly because of the diner thing, but mostly because she is so controlling over Josie, and any time Josie is the slightest bit petty or selfish, I hold her mother entirely responsible.)

Betty’s next course of action is to create a MANDATORY TOWN-WIDE CELEBRATION (since this is the only week out of the year when there is not already one pre-scheduled). She tries to convince Cheryl to make the River Vixens perform, which Cheryl declines, not because she cares, but because she finds confrontation arousing. 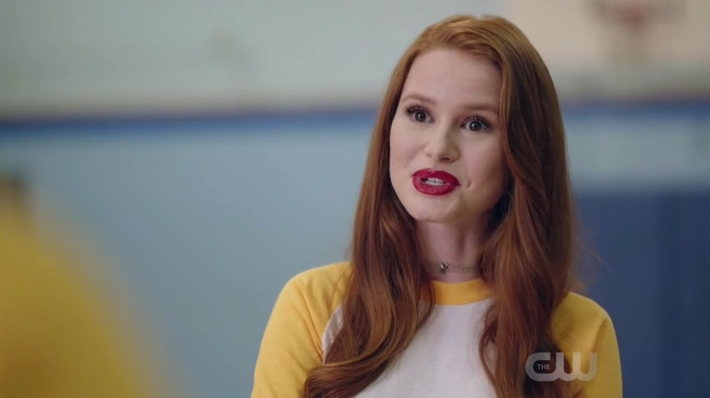 Under normal circumstances, Jughead would of course be leading the charge on the “save Pop’s” campaign and it’s probably a good thing for Pop’s that he isn’t, since his fundraising efforts would probably entail shaking a collection tin under everyone’s noses and asking them to consider the symbolic value of their French fries. Instead, he’s busy trying to help his dad, who is currently facing down a 20-year sentence. F.P.’s court-appointed lawyer is less than useless, so he turns to the Serpents, who recommend using their attorney, Penny Peabody, whose alliterative name reveals that she is about to be a Character of Significance. 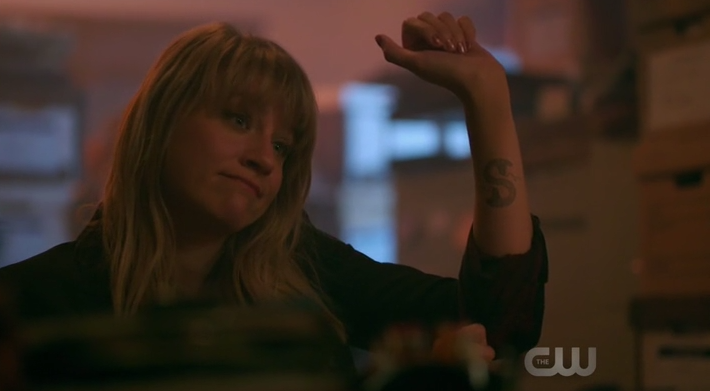 FUNNY THING IS, I WAS ORIGINALLY SORTED RAVENCLAW, BUT THE SORTING HAT IS VULNERABLE TO DEATH THREATS, IT TURNS OUT.

Penny (aka “The Snake Charmer”) is a Serpent, and her college tuition was paid through the gang’s charitable arm, so her loyalties are clear from the outset. She tells Jughead that her father’s best bet for a more lenient sentence is if one of the victims were to offer their forgiveness. Jughead thanks her for the free advice, to which she gives a knowing chuckle and asks: “who said anything about ‘free?’”

Following Penny’s advice, Jughead and Betty visit the Blossoms in their other mansion, where Cheryl and Penelope have gone full Estella/Miss Havisham. 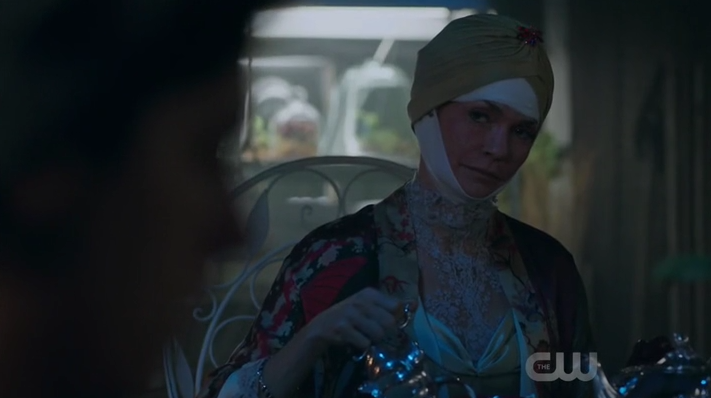 Unsurprisingly, neither Cheryl nor her mother show any inclination to show F.P. “mercy,” whatever that is. Learning this, Jughead thinks he has finally run out of options, since he would not stoop so low as to extort a widow and orphan for their cooperation. But Betty, of course, knows Cheryl a bit better, so she confronts her in front of her locker/cave of wonders/figurative vagina. 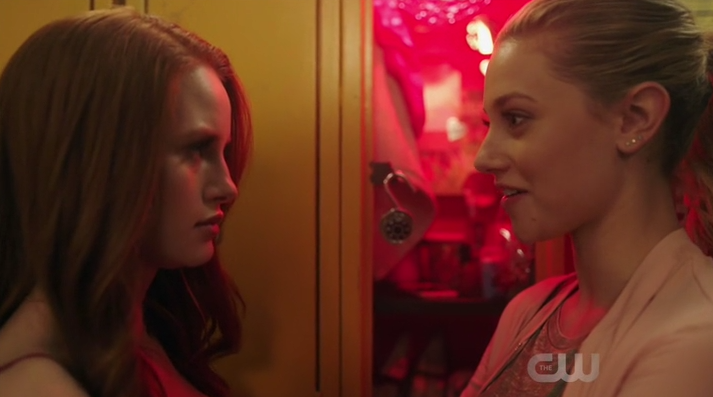 IF YOU DON’T HELP ME, I’LL RELEASE THE VIDEO OF YOUR DAD MURDERING YOUR BROTHER. 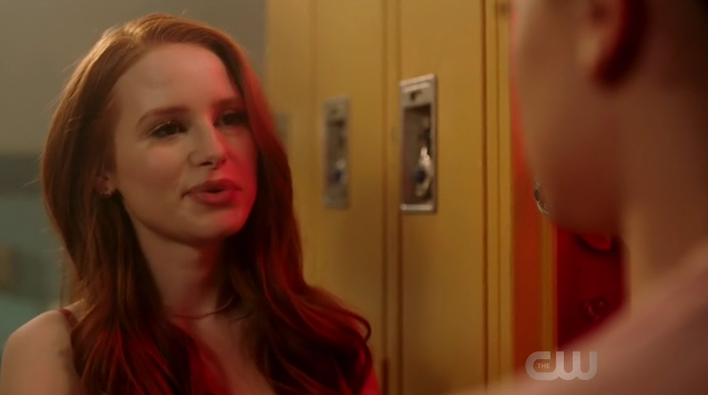 THAT’S WHAT I LOVE ABOUT YOU BETTY. YOU PLAY THE GOOD GIRL, BUT SOMEHOW YOU ALWAYS KNOW THE PASSWORD TO THE SLYTHERIN COMMON ROOM. 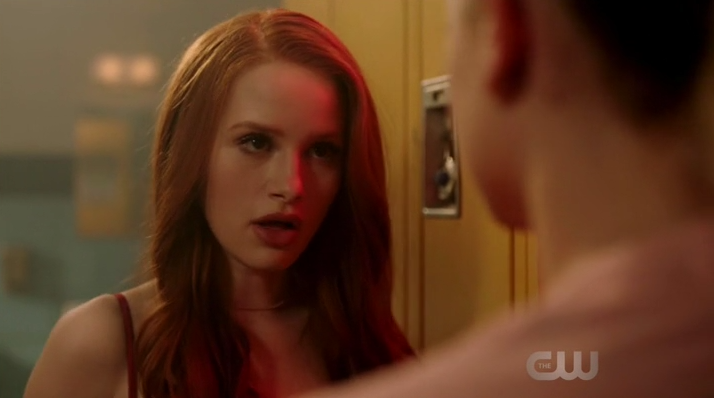 THE SLYTHERIN COMMON ROOM IS ALSO A METAPHOR FOR MY VAGINA.

Cheryl also agrees to loan the River Vixens for Pop’s fundraiser, now that she’s been wooed with the intimidation and blackmail which are the flowers and chocolates of her magnificently warped heart.

The only person not eager to save Pop’s is Archie, who (understandably) finds the place very traumatic these days. Archie is still convinced that his father’s shooter is going to come back and finish the job, a conviction that increases when he learns of Ms. Grundy’s untimely demise. Archie begins to suspect that this killer is targeting the people closest to him, especially since Grundy was killed with the cello bow he gave her. Archie knows this sounds a bit paranoid, but he keeps reassuring everyone that he is “not crazy.” 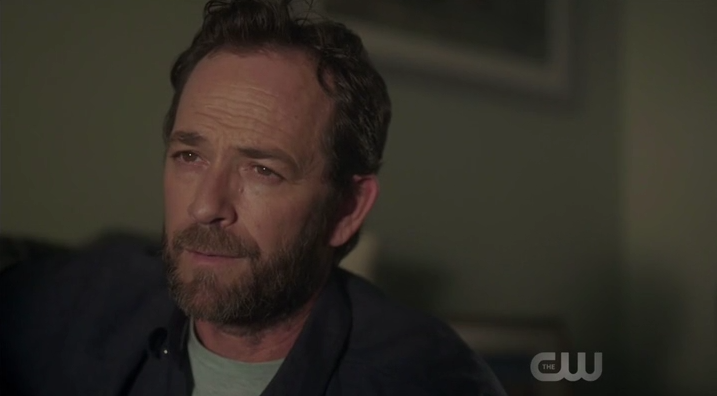 ARCH, IF YOU SAID “I’M NOT GAY” AS MANY TIMES AS YOU JUST SAID “I’M NOT CRAZY” I’D BE BUYING YOU A MESH SHIRT AND A BUTT PLUG STARTER SET.

Like a lot of people desperate to prove their sanity, Archie decides the best course of action is to STOP SLEEPING ENTIRELY. To this end, he reaches out to Reggie, the school’s drug dealer for some drugs that will keep him up. Reggie recommends—and at last we have arrived at the point—a new concoction known as “Jingle Jangle.” 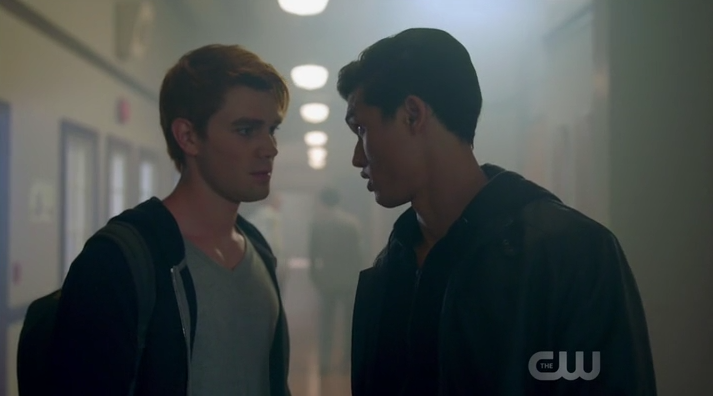 IT’S THE PHARMACEUTICAL EQUIVALENT OF TAKING ONE SIP OUT OF EVERY BOTTLE IN YOUR PARENTS’ LIQUOR CABINET.

According to Reggie, Jingle Jangle is guaranteed to keep your eyes open and dick hard for days on end, because again, Jingle Jangle is clearly just Reggie’s brother’s Adderall, mixed with his dad’s Viagra, and cut with that little bit of baby laxative for authenticity.

Regarding the name…remember last week when I said I was extending this show a large line of credit for being smart and self-aware? Shit like “Jingle Jangle” makes me feel very nervous about that decision, because when it comes to fake slang, people have incredibly sensitive bullshit detectors, and “Jingle Jangle” is about as close to passing muster as Bernie Sanders is to being mistaken for Tom Hardy. It’s just baffling that it made it through the first table read.

Anyway, Reggie decides that Archie is already manic enough without chemical assistance, so he declines to sell him any Jingle—fuck it, we’re just calling it Molly from here on out.

At any rate, while Archie guards against the Angel of Death, Veronica remains convinced that her parents are to blame for Fred’s shooting. She’s not shy about sharing that theory with them, either, which is awfully bold of her, considering she thinks they’re, you know, murderers. She also confronts her father with the letter he sent, which threatened her mother if Veronica didn’t testify. Hermione quickly covers this up and claims that she wrote that letter, because she understands the importance of solidarity in criminal families.

The episode’s climax is the retro night at Pop’s, where the whole town has been lured into attendance with the promise of cheerleading, vintage t-shirts that send me scurrying back to IMDB to make sure it is ethically permissible to be this aware of these characters’ breasts, and a Pussycats’ cover of “Milkshake.” 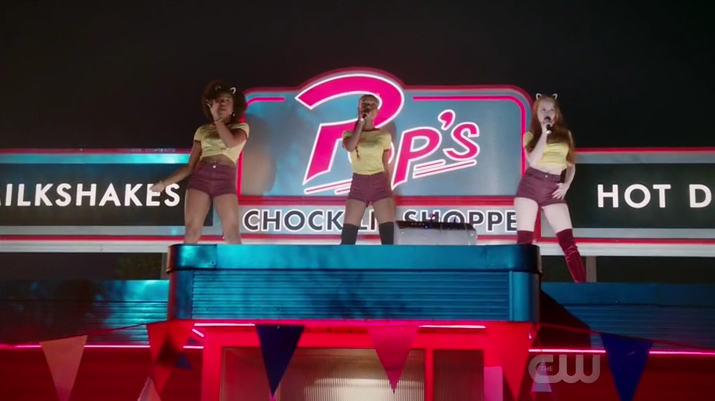 Cheryl fills in as a Pussycat because Valerie is out with Norovirus (GET WELL SOON, VALERIE! ALSO COME OUT AS QUEER AT YOUR EARLIEST CONVENIENCE!). The performance is passable, floated on the strength of creative harmonies, though I resent the implication that the Pussycats are now just singing covers while accompanied by an invisible backing band.

But all is not as wholesome as it appears: out in the parking lot Reggie sells Midge and Moose a couple of Pixie Sticks’ worth of the drug that must not be named (of course JJ is sold in candy packaging) presumably so Moose can keep his antlers up for more than five minutes at a time.

Betty’s mom improbably hears this transaction go down, and photographs it for posterity. Alice is posted up in a booth where she is noisily celebrating Pop’s closure for the sole purpose of antagonizing her daughter. My favorite moment of the whole episode is when Betty wearily caller her mother a “fiend” and there is no break in the action whatsoever. It’s just completely within the normal parameters of their relationship for one to accuse the other of being an agent of the Prince of Darkness, and to do so with the expectation that they’ll be guzzling orange juice around the breakfast table tomorrow, same as always. 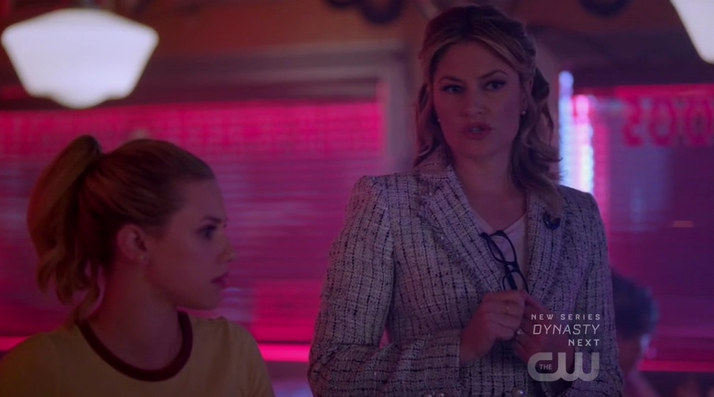 YOU ARE THE WHORE OF BABYLON, BETTY. GOOD LUCK ON THAT MATH TEST.

I have to admit, I was pretty worried about the fate of Pop’s, since losing that central location would be taking this show too dark, too fast, I think. But thankfully, Pop joyfully announced that those plucky kids pulled it off, and the diner will stay open!

Except, as we learn, the situation is a bit more complex than that. It turns out Veronica’s dad quietly purchased the diner himself, and is allowing Pop to stay on to provide that comforting illusion of homespun authenticity. In addition to placating Veronica, the situation will also provide the Southside Serpents with new territory, which Betty’s mom blames her for in the strongest possible terms. Privately, Hiram also thanks Hermione for lying about the jailhouse letter, which he attributes to her “loyalty.” Hermione, bless her, just shoots him a look that plainly says that it’s nothing short of adorable how he confuses “strategy” with “loyalty.” 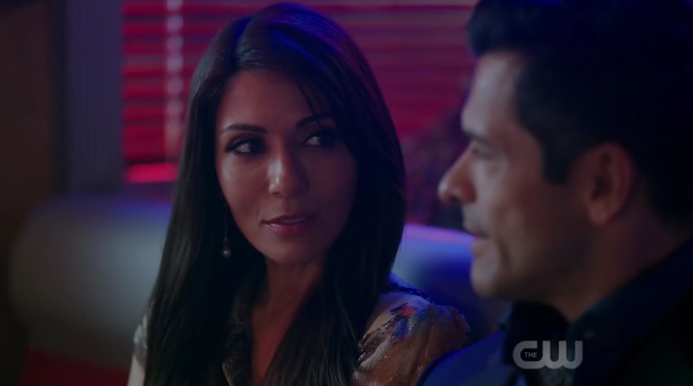 THERE ARE NO SECRETS IN THIS FAMILY. THERE IS ONLY FUTURE BLACKMAIL MATERIAL.

In our final two codas, we journey further into the promised darkness. Firstly, Archie meets with Dilton Doilie (whose name was just made to be in a headline along with the words “POLICE EXCAVATE BASEMENT OF HORRORS”). Dilton sells him a gun, which is just 100% exactly what Archie needs at this moment, for definitely sure. 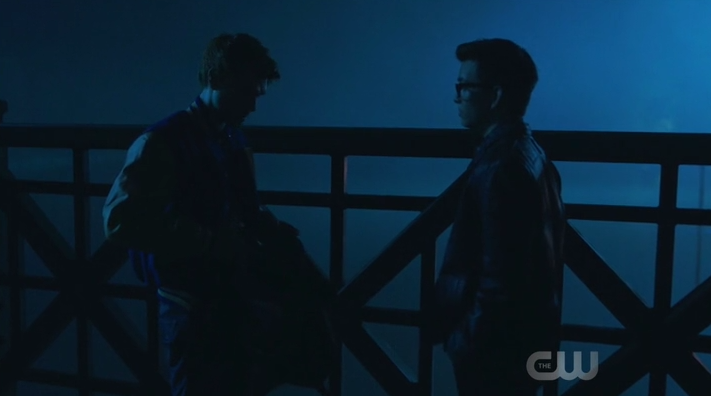 EVEN THE NRA WOULD TAKE ISSUE WITH THIS.

And lastly, we catch up with Midge and Moose as they suck down their doses of Jingle Jangle, but they scarcely have a chance to enjoy their giddy little high, before the masked gunman reappears and shoots at least one of them. (Hopefully just Moose because Midge looks like Carly Rae Jepsen and I don’t want to lose her.) 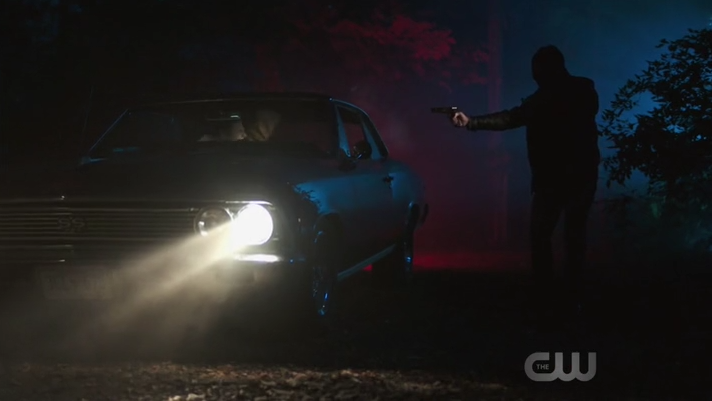 So, a masked vigilante is hunting down fornicators and drug users. Now who do we know who hates both those things (and any activity at risk of releasing dopamine)? 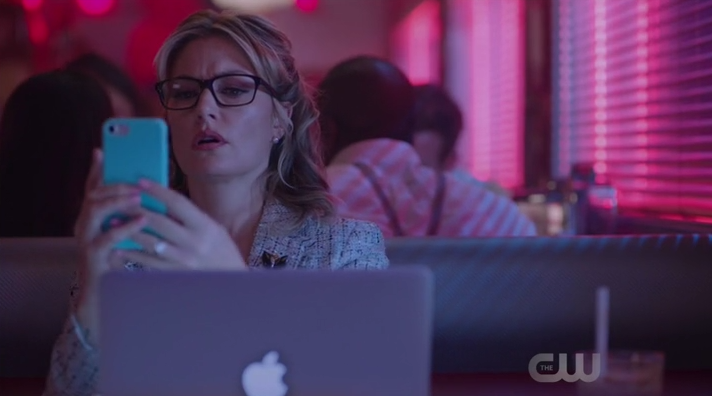 Next week, if the closing music is any indication, we’ll finally meet the new incarnation of Sabrina.