Cable Girls (or as it is known in Spain—Las Chicas Del Cable) had me at “women-focused” and “historical setting.” From the moment I found out about the show, I knew I had to devour it as soon as it was released on Netflix this past April.

I first discovered Cable Girls while perusing The Mary Sue, and I was instantly intrigued at the idea of watching women go out into the world to pursue their dreams at a time when most women were housewives or living with their parents, waiting for a man to rescue them. Little did I know that the show would encompass so much more than three women getting jobs as telephone switchboard operators in 1928 Madrid.

Here’s the trailer to whet your appetite.

Warning- some spoilers (but not too many) after this point so bookmark this and look away if you want to watch ahead of reading the rest of this.

While the show is set during the flapper era (the costumes are on point and reflected the characters so well) the stories (unfortunately) are as topical as ever in today’s political climate, whether it’s women’s empowerment, queer themes, sexual freedom, spousal abuse or police corruption. The soundtrack features some modern flourishes with contemporary music by artists such Demi Lovato, Kaliyo and Lana Del Rey, which I thoroughly enjoyed for making the show more relatable.

We first meet Alba and her friend Gimena as they are running away after stealing from Gimena’s abusive husband so they can hock it and leave Madrid. This goes awry when Gimena is shot and killed by her husband. This event leads to Alba getting a job at the only telephone company in the country. She goes there, not on her own volition, but at the behest of the police chief who wants her to steal money from the company, and that drives a good portion of her story arc. It’s the classic case of a woman having to do something to survive in a man’s world while maintaining as much of her own agency as possible.

From there we meet the other characters: Marga (a naive young woman from a distant village), Ángeles (a wife and mom to a little girl, who is already working there as an operator), Carlota (an heiress who wants to work, not sit around waiting for the “right” husband), Sara (the supervisor of the operators), Carlos (the owner’s son who co-runs the day-to-day operations with Francisco), Francisco (the company director and Carlos’ brother-in-law), Carolina (Carlos and Francisco’s assistant), Miguel (the chief technician) and Mario (Ángeles husband who works in management).

Alba finagles her way into the group of  interviewees by conning another applicant, Lidia, into thinking she won’t be considered for the job and then stealing the woman’s identity. She quickly meets Marga, Carlota and Ángeles, and they bond with each other almost immediately. Their friendship is the heart of the show.

Each of the women have compelling backstories that drive their actions as they navigate their work and personal lives. Their complexity is conveyed by the fierceness and vulnerability they display throughout the eight episodes.

As a lesbian, the story that intrigued me the most was Carlota’s journey. She’s feisty and pushes Marga to be more modern, but inside she’s hiding a part of herself that could prove deadly if the wrong people found out. At first we see her dating Miguel but later find out she’s bisexual and attracted to Sara. Carlota and Sara’s first kiss is both tender and passionate and the way they embrace polyamory with Miguel was the most unexpected and delightful part of the story.

I went into this show with no expectations beyond watching women navigate the world outside of contemporary American life, so the queer story was a pleasant surprise. The way they chose to tell this part of the story was innovative and groundbreaking, but not unlikely since queer people have existed for millennia. 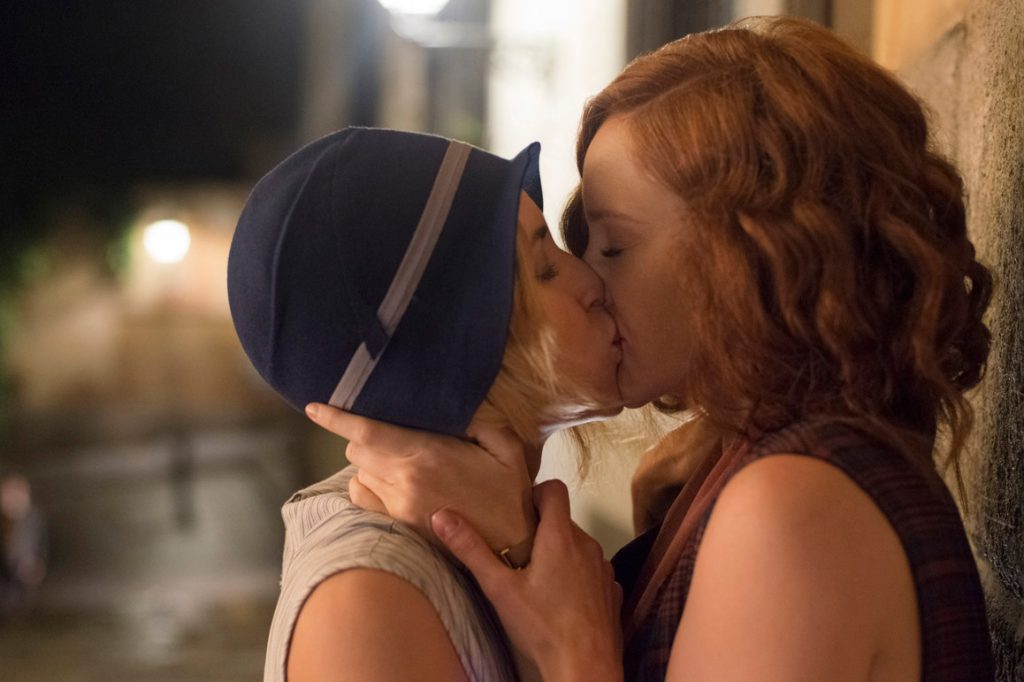 I laughed out loud when Marga got drunk for the first time, cried when a pregnant Ángeles was brutally attacked by Mario, cheered when Carlota stood up to her father and finally moved out of his house, smiled when it was revealed that Sara, a character who was hard to relate to at first, was a feminist and suffragette (Spanish women didn’t achieve universal suffrage until 1931) and gritted my teeth as Alba/Lidia kept lying to Marga, Ángeles and Carlota at every turn. The only woman character that didn’t get enough layers was Carolina, but I’m confident we will discover more about her as time goes on.

The show stays true to the times while also conveying a feminist message of empowerment and equality, and that’s something to celebrate as we navigate the troubling waters that surround every move out of the White House and the GOP-led Congress.

The next batch of eight episodes is slated for a December release date. As soon as I find out more details I’ll post them in the comments below. The show has already been renewed for additional episodes beyond the first 16.

The world needs female focused shows from all corners of the world so our stories get told and I’m so glad we’ll get to follow these fabulous characters some more.

Carrie Maxwell is a contributing writer for Windy City Times and has had over 500 pieces published since September 2010. She is also the lead researcher and media coordinator for the Legacy Project (the world’s only outdoor LGBTQ museum located on Halsted Street in Chicago) https://www.facebook.com/legacyprojectchicago. Carrie received an Emmy Award while working at CNN for contributions to the reporting of the events surrounding September 11, 2001 and was also the Associate Producer/Research for Turner Broadcasting’s 2000 and 2001 Trumpet Awards. Find her on instagram @carrie.maxwell and Twitter @carrieemaxwell.