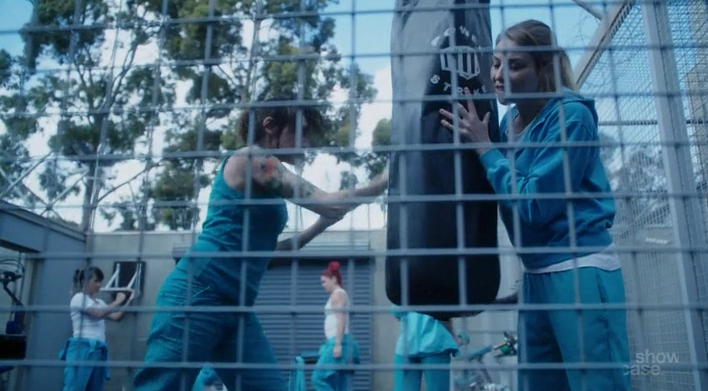 Ladies and gentlemen of Wentworth fandom, it has long been my opinion that sports analogies are the last refuge of defeated writers, a kind of rhetorical Helm’s Deep to which one can marshall one’s remaining forces and make a final stand against an encroaching tide of meaninglessness. I had been saving mine for a rainy day, and friends, that day has arrived.

My sport of choice is college basketball, and I have the great good fortune to be an alumnus of the University of North Carolina, where (if I may just brag) we win A LOT of national championships (we won this very year, in fact). So I am intimately familiar with the feeling that comes a few hours after that sweet, climactic victory; when your voice is hoarse from screaming and you’re picking the confetti from your hair, and it dawns on you: next year is gonna suck. Because the consequence of winning a college championship is that all your best players are whisked away to the pros, leaving you with a bunch of baby-faced freshman and second string players. The year after a championship is what is known as a “rebuilding season,” a term that captures the cruel paradox that in college sports, your team’s victory is also your team’s destruction.

You can see where I’m going with this, right? Season four of Wentworth was our championship season, and it concluded with the departure of our star player. So season five was always going to be a rebuilding season for this show, as it forges a new identity, post-Bea. Did I think it would get this bad? No. I’ve been surprised at how thoroughly Wentworth has wasted its remaining talent and insisted on passing the ball to Joan every single play. But, unlike many of you, who have told me that you’re planning on bowing out after this season, I am not despondent, because I am not a fair weather fan. Not of a show that has meant this much to me over the years. Just like in basketball, I have faith in Wentworth players and coaches, and in it as an institution. (SEE, THIS IS WHAT SPORTS ANALOGIES DO TO WRITERS.) Nevetheless, I will be back next season, and I genuinely believe it will be better, if Pete McTighe can bring himself to take some risks.

That being said, I’m not going to recap this episode. I just don’t have it in me. Wentworth recaps take me a full day to write and leave me incredibly drained, and this episode does not deserve that. I have other work to do of greater use to myself and the world.

There are only three noteworthy events that I’ll discuss, because they’re all going to be important going forward, and they share some thematic common ground that illustrates the weakness of this episode and the entire back half of this season.

This week, Liz finally realizes the awful truth, that Sonia and Officer Chinstrap were working to entrap her the entire time, a betrayal nearly as painful as what Vera goes through with Jake. She confronts Sonia about this, which forces her to admit that she was Witness X. Sonia could tell all the women about this, effectively destroying Liz’s position in prison, but chooses to mete out her punishment more slowly, and only tells Boomer. Boomer then confronts Liz about in the bathroom, in a desperately underwritten scene that requires her to scream “YOU JUST LAG AND YOU LAG AND YOU LAG AND YOU LAG” while hosing down the area with spittle.

THIS CLOSE? YOU WANT ME TO BE THIS CLOSE TO THE CAMERA?

Finally buckling under all the pressure, Liz responds in equally dramatic fashion, by pulling out her hair and collapsing on the floor. 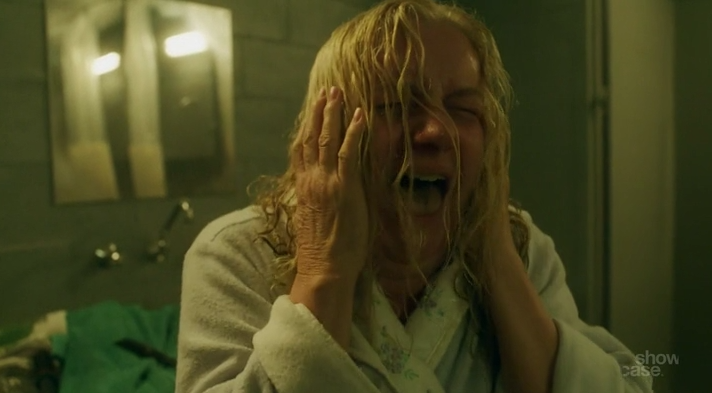 WHY ARE YOU FORCING ME TO AD LIB A MENTAL COLLAPSE?

Both Celia Ireland and Katrina Milosevic are gifted actors, who have made season after season of Wentworth drama feel both vital and believable, and both of them got completely thrown under the bus by this scene. It’s one of several instances where this episodes attempt to use over-the-top acting to cover up the fact that nothing is actually happening.

After her breakdown, Liz wakes up in the medical wing to Sonia promising to mete out her revenge in her own sweet time. 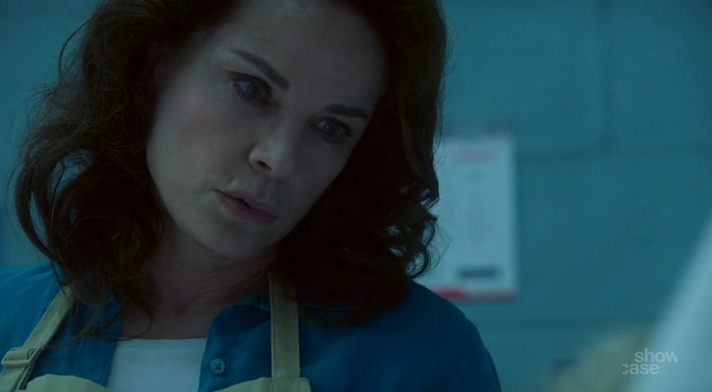 THE YEAR IS 2042, ROBOTS HAVE TAKEN OVER THE EARTH, AND I AM STILL DECIDING HOW BEST TO INFLICT MY PUNISHMENT ON YOU.

I’m really torn about the partial character redemption Wentworth has attempted for Jake in the past two episodes. On the one hand, I usually believe that nuanced characters are more interesting than out-and-out villains. But on the other, Jake has proven himself to be such a scumbag that sympathizing with him even for a moment feels like dry-swallowing a horse tranquilizer.

After last week’s home invasion, Jake is suddenly very aware of how much he has to lose in his nice, comfortable life with Vera. So he desperately tries to cut off his relationship with Joan and save some fragment of his fractured soul. But watching Jake try to take a stand against Joan is like witnessing a one-person Children’s Crusade.

Finally, Jake suggests that he and Vera just run away together and leave behind this palace of broken dreams. And Vera is walking to Channing’s office to tell him exactly where he can shove his demotion, when Joan intercepts her and informs her that Jake has been her puppet all along. 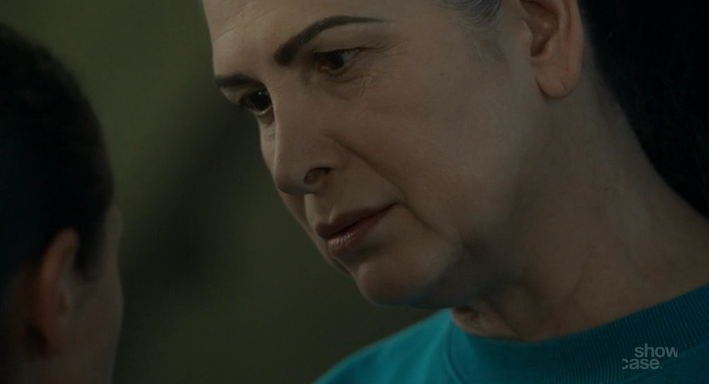 I DO NOT REMEMBER WHAT MY MASTER PLAN IS, BUT I FEEL CONFIDENT THAT IT DOES NOT INCLUDE YOU LEAVING.

Vera is devastated and breaks up with Jake, who decides to end his sorry life by taking a big gulp of air from his exhaust pipe (which, incidentally, is what Bea originally went to prison for, all those lifetimes ago). 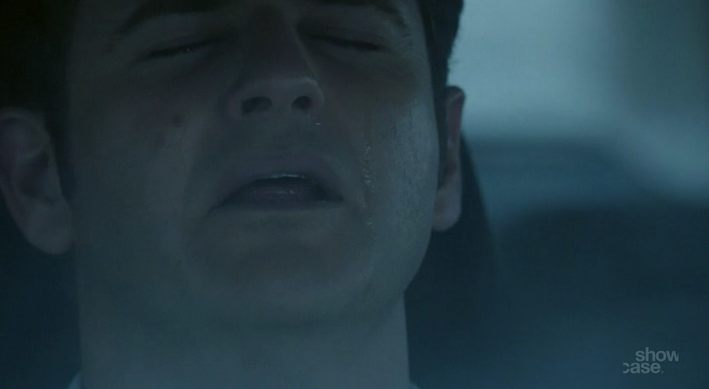 You sit with the fact that he might actually die for a long time, and I spent most of it realizing that I straight up did not care either way. Anyway, he does not go through with it in the end. Instead, he goes straight back to his job at the prison, like a bumper car trapped in a carnival ride. 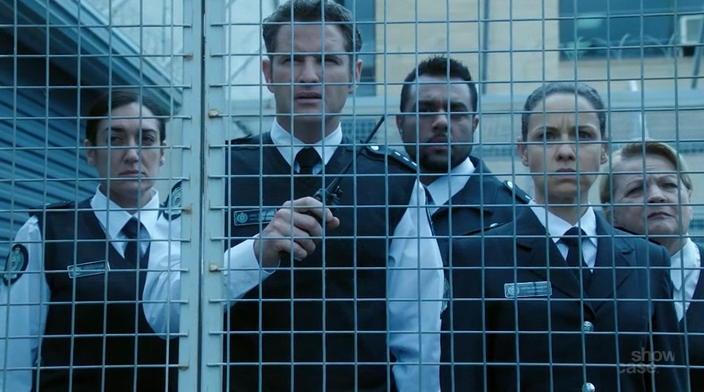 Again, it’s big, messy breakdown scene after which nothing changes.

3.The trial of Joan Ferguson:

So Kaz has this brilliant notion this week to put Joan on trial, in what she insists on calling a “kangaroo court.” 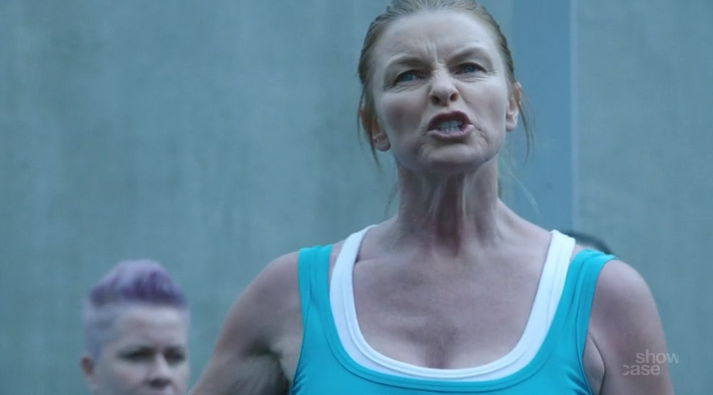 I KNOW WHAT “KANGAROO COURT” MEANS AND I DON’T CARE. KANGAROOS ARE ADORABLE AND THEY DESERVE JUSTICE TOO.

Kaz enlists Franky and Allie to make the case that Joan no longer deserves to be Top Dog. It’s unclear what non-violent punishment Kaz has in mind—probably a nice long stay in time out—but the situation rapidly spins out of control.

First, Franky reads the laundry list of Joan’s crimes, which is just a reap of the last four seasons. 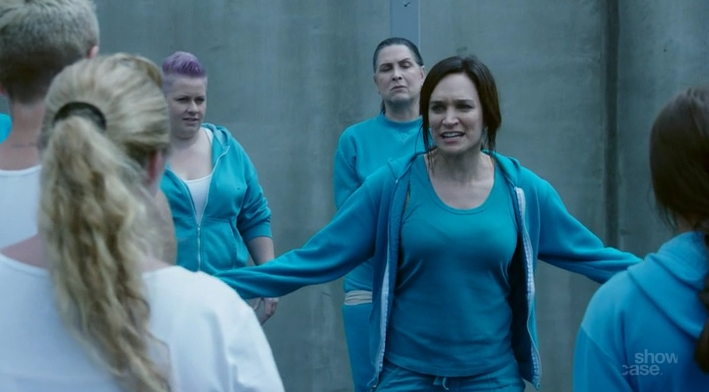 Then Joan speaks for the defense. She starts out strong enough. 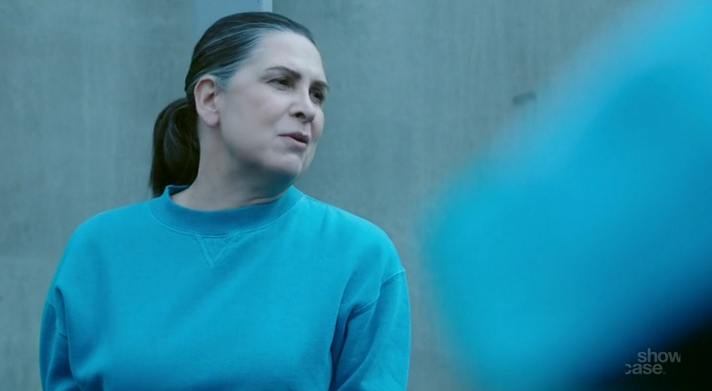 YOU ARE ALL OUTCASTS. NO ONE LOVES YOU.

But then, in one of the most high-stakes moments of her entire life, Joan completely drops the ball, and starts spewing insults at all the inmates.

WHAT WOULD THIS SHOW BE WITHOUT ME?? SOME KIND OF FEEL GOOD DRAMA WHERE CHARACTERS WERE GRANTED SOME POSSIBILITY OF REDEMPTION? NO ONE WOULD WATCH THAT.

Then, a pre-tied noose just appears like a gift from god, and the women string Joan up on the basketball goal. 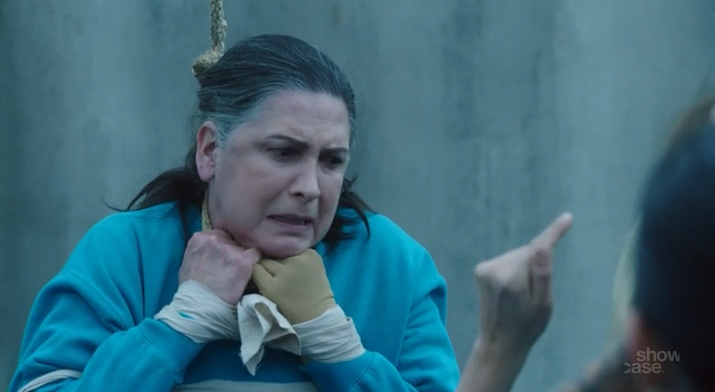 WAIT! STOP! I’LL LET SOMEONE ELSE HAVE A STORYLINE, I PROMISE!

Watching this, it crossed my mind that maybe this was Joan’s plan all along; to have the inmates end her miserable life. Just like Jake’s attempted suicide, this scene tries to convince you that this really might be the end of Joan Ferguson. But I don’t think anyone who has watched this show for as long as we have can buy it. So the episode ends with her eyes popping open. 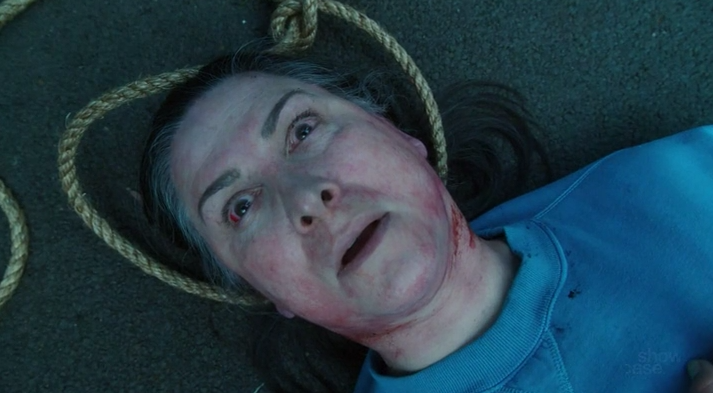 GOOD LUCK KILLING ME, MORONS. I GOT HORCRUXES STASHED ALL OVER THIS BITCH.

That makes three times in a single episode that Wentworth has asked its actors to do the impossible, and make nothing feel like something.

It’s like watching your team run the same play again and again, even though it’s clearly not getting you any closer to the basket, and—GODDAMMIT THE SPORTS ANALOGY IS BACK. I AM CUTTING MYSELF OFF.