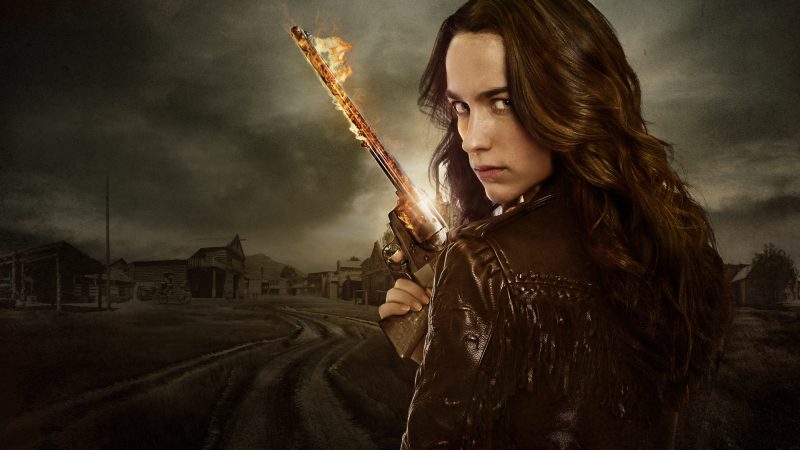 Coming out of a particularly brutal year of television, Wynonna Earp showed up just when we needed it. It immediately brought a Buffy season one vibe, with a good mix of mythology, humor, and women doing beautiful violence. It was right on time, but outside of my queer Twitter bubble it doesn’t seem to be as beloved it as it deserves to be. But they’ve recently announced a June 9th premiere date for their upcoming second season, and, conveniently enough, season one just went up on Netflix. So if you missed the fun last year, the best advice I can give you is to take a couple lazy Sunday afternoons over the next few months and watch all thirteen episodes, so you’ll be all caught up and properly able to appreciate my recaps for season two. But on the off chance you can’t budget the time to catch up, or if you just need a little convincing, I guess we ought to have ourselves a little conversation.

So, what is a Wynonna Earp, anyway? Wynonna Earp is a television show, based on a comic book also called Wynonna Earp, about a character named, of all things, Wynonna Earp. Wynonna Earp the character is a descendant of Wyatt Earp, the gunslinging lawman from ancient mustache-times. As the story goes, in this particular story, after the shootout at the OK Corral, Wyatt moved to a town called Purgatory, became sheriff, and promptly got himself cursed by killing a demon so that everybody he killed in the line of duty now comes back to life as a pseudo-demon called a Revenant. And now it’s the job of every generation of Earps to try to end that curse by killing every last one of them with Wyatt’s gun. Lucky for us we’ve got a pretty good generation of Earps right here.

As you can probably infer from the title of the show, Wynonna is our Chosen One. She’s also the town pariah. She left Purgatory to go someplace that doesn’t matter, but now she’s back, twenty seven years old, and newly saddled with a destiny. She’s really good at fighting and not particularly good at shooting. She’s sloppy and rude and lonely in the same way as your one grumpy friend who is the only person you really ever want to hug. Melanie Scrofano is perfectly cast in this role. She’s lovable even when she’s not likable. But she’s usually pretty likable anyway. 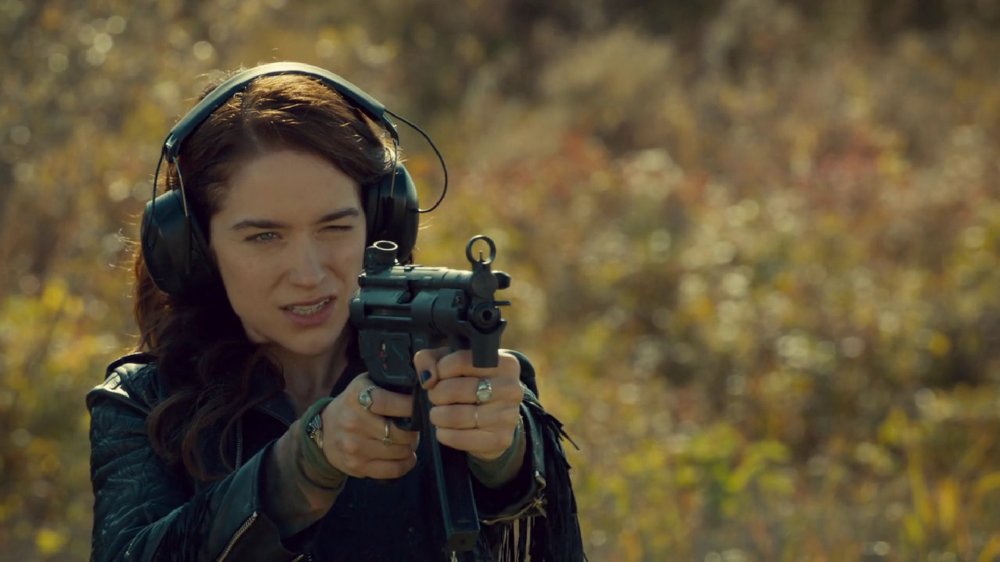 Wynonna: Bad at shooting, good at having a nice face.

Wynonna’s little sister (and probably your favorite character) is Waverly Earp, who is objectively perfect. Her pants are so high-waisted they practically touch her armpits but she still manages to show off her midriff in nearly every inexplicable outfit she ever wears. She’s Spencer Hastings mixed with Fred Burkle, which is to say, she’s a tiny weird genius that you absolutely should not cross. Her entire adult life has been secretly  devoted to researching every weird thing and by golly it sure does come in handy. She has the worst possible boyfriend but it only takes her half a season to trade him in for the best possible girlfriend, whose name is Officer Haught, and who she bangs on the sheriff’s couch. 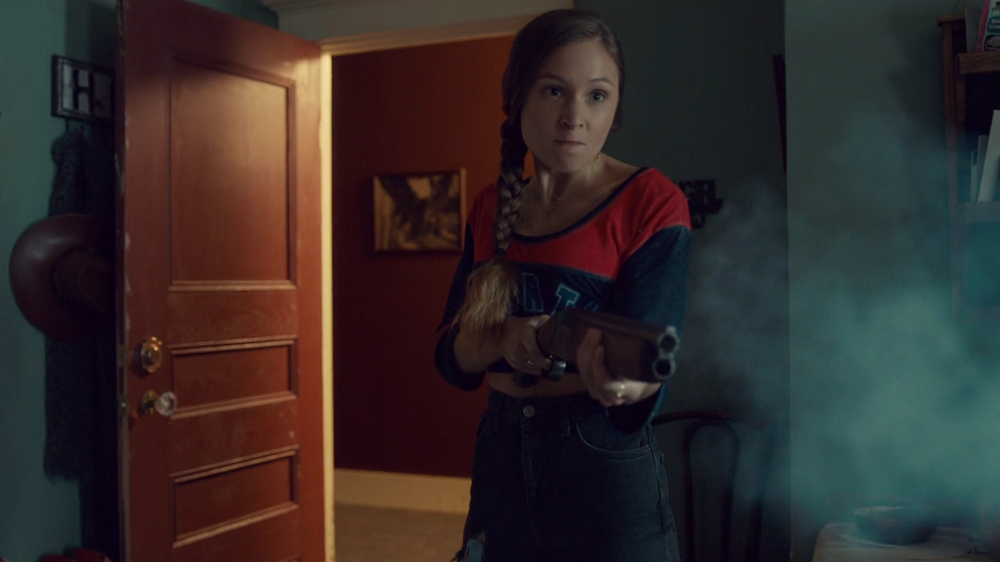 As you can see, Waverly is much better at shooting.

Even the boys are good! Xavier Dolls is a secret agent man who drafts Wynonna to be his deputy, which is not a reasonable thing to do but it works out mostly okay. On paper he’s very Riley Finn; he legit works for The Initiative and his boss is an evil blonde woman. But really he’s more like a little bit of Angel and a little bit of Giles. His mentorship slash friendship slash almost romance with Wynonna are sweet, and they develop at a comfortable pace. The other important dude is Dolls’ opposite in every way. His name is Henry for a minute or two but his mustache should tip you off right away that his name is also Doc Holliday. He’s a selfish anachronistic drunk, but again, it works. He’s all the good parts of Spike, plus a mustache and a cowboy hat. There’s kind of a love triangle because of course there is, but also kind of not. Like, it’s there, but whenever it’s about to get annoying everybody has to work together to kill things or to not be killed themselves and it becomes not really a thing anymore at least for a while. 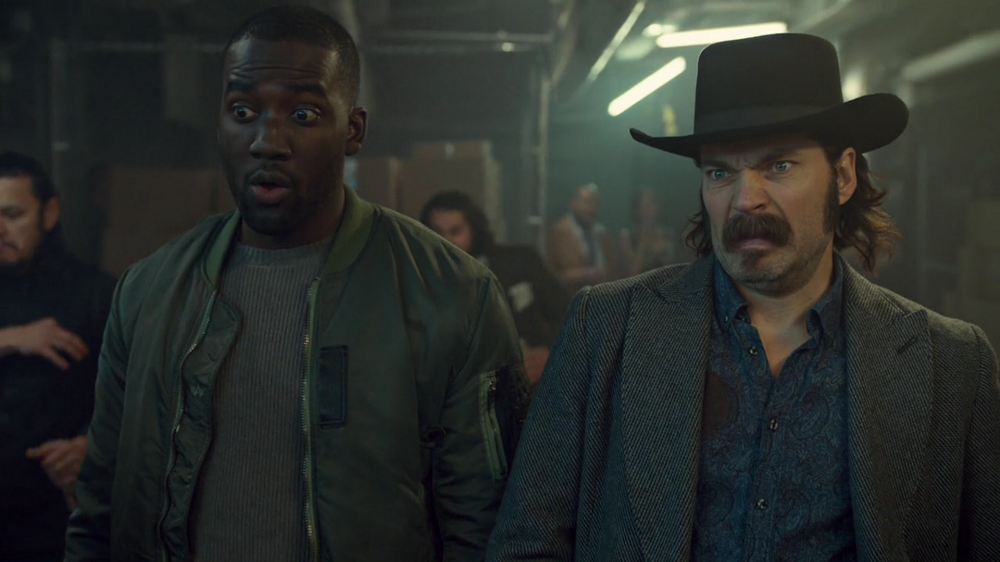 Boys. You may have read about them in a book.

The format is mostly monster-of-the week, but every episode builds on the greater mythology of the show and ties into season-long plot arcs, so it’s hard to just pick a few episodes to watch. There are a lot of characters and a lot of curses to keep track of. But if you absolutely cannot find room in your schedule for thirteen episodes over the next two months, you should at least check out these ones to get you ready for season two.

This is the pilot. It introduces most of the main characters and gives you the barebones mythology that everything else springs out of. It also introduces Peacemaker, which is Wyatt Earp’s gun. Most importantly, Waverly blows a hole through a wall with a shotgun, which as far as I know does not have a name.

This episode is mostly good for falling in love with the characters. Waverly throws an engagement party for her horrible friend in an attempt to feel normal, while also taking custody of a witch’s demon child’s skull. There’s a zombie stripper, kind of. Wynonna bonds with Officer Haught over whiskey and serial killers. Waverly bonds with Doc over not being as horrible as everybody else. 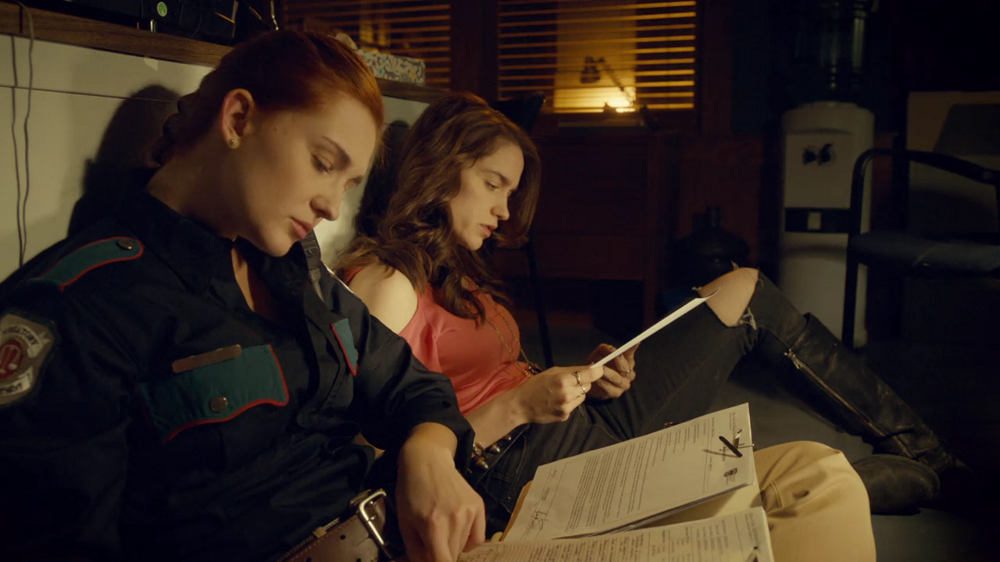 Waverly and Officer Haught finally kiss. (And talk, and have cute misunderstandings.) But yeah then they make out and it’s very good. Also, the witch finally puts together an entire demon skeleton to the delight of herself and nobody else at all, and Bobo buys the bar everybody hangs out at because nothing is more evil than ruining happy hour. 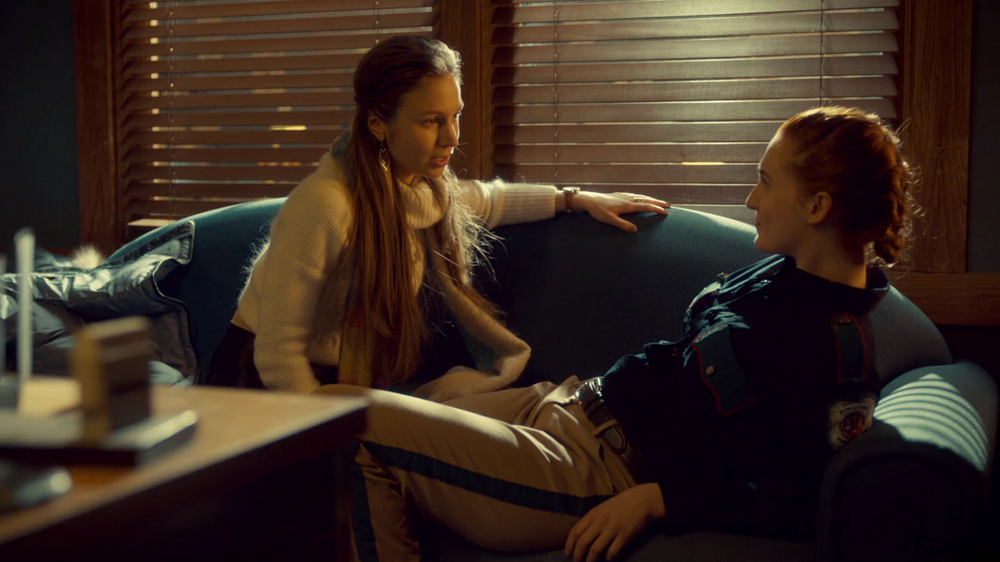 Officer Haught, I would like to report a smooch.

I realize this is four entire episodes so at this point why not just watch the whole season, right? (Seriously though, just watch the whole season.) But if you’re going to watch season 2, you’ll need to see all of these episodes because this is the Big Bad End Guy arc and if you don’t watch it I imagine you’ll have no idea what anybody is talking about next season. Episode 10 is a standalone, but it introduces a character who is essential for the other three episodes and also incidentally my least favorite character on the show. Everybody’s motivations and secret superpowers come to light. There is apparently a Poker Spectacular but I don’t know if any poker actually happens. People get poisoned, the government comes to town, revenants try to leave town and a big snake tries to get in. There’s kissing. Everybody is sad and happy. Some people are not who they thought they were and some people are maybe evil and some people are maybe gone. 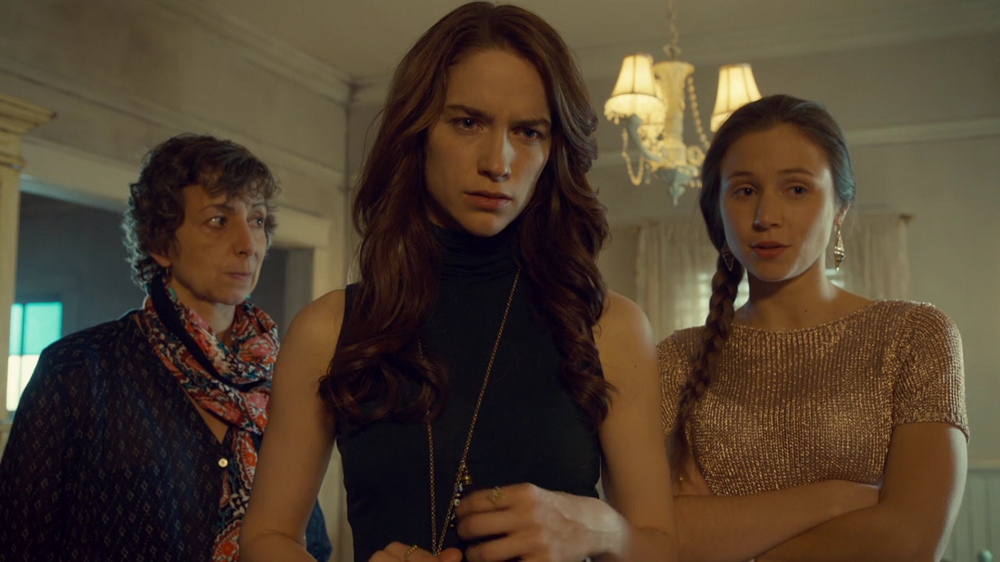 So that’s where we’re at. Season two is looking pretty heavy based on where we left off, but in the trailer Waverly is wearing a cheerleading costume, Officer Haught got a haircut, and Doc still hasn’t shaved, so things probably are not as bad as they seem. So get to watching. Or rewatching. It’s for your own good. Because in two months everybody will be talking about this show all the time and if you don’t get on the bandwagon now you’ll probably wind up getting pretty annoyed with us.

Dufrau is a sandwich enthusiast based out of Cambridge, MA. She is great at leisure, good at videogames, and bad at everything else. She mostly likes to like things, and she likes to like cats most of all.
https://twitter.com/dufrau