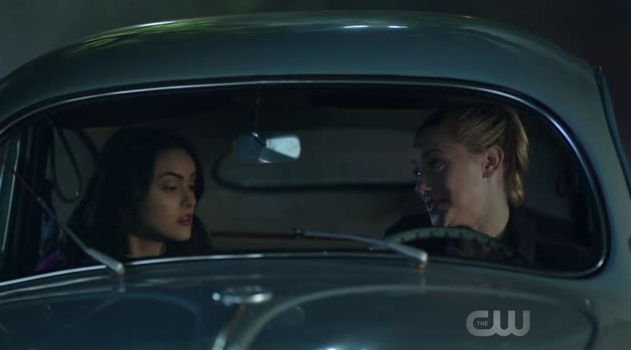 It is my pleasure to report that this episode marks a definite improvement for Riverdale, with the magical addition of an element that had been sorely lacking from the first couple of episodes: humor! This show is still figuring out its tone, which it has thus far borrowed from several other teen drama sources. Riverdale takes its musical bent and slavish devotion to camp from Glee, its teen murder mystery angle from Pretty Little Liars, and its nose-tweaking progressive politics from Faking It (though Cheryl ain’t no Lauren).

But in order for this show to add up to more than the sum of its parts, it has to give us some real emotional stakes, which this episode begins to do via Jughead. Like, Veronica is fun and has some real comedic chops, Betty is so doe-eyed that she frequently and effectively crosses the line into horror, Cheryl’s villainous contradictions give her a lot of room to develop, Kevin is, I guess, therapeutic wish fulfillment for gay men, but Cole Sprouse’s acting is the lynchpin that holds this whole cast together. (Sorry Archie, you are credibly earnest but I cannot believe that anyone as pretty as you are has ever had a real problem.) 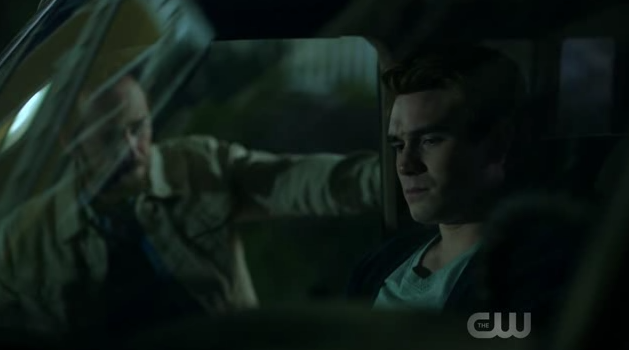 THIS IS LITERALLY THE SADDEST FACE IN YOUR ARSENAL.

After learning that Grundy’s car was at the river on July 4th, Betty pole-vaults to the conclusion that Grundy must have been there with Archie, and therefore they must have been having sex. She confronts Archie at Pop’s (Veronica comes too because to her, all drama either is or should be about her) and Archie confirms that the Grund has been spreading her legs for more than just her cello. Betty is like “OH MY GOD ARCHIE YOU ARE BEING MOLESTED” and Veronica is like “yawn, didn’t they do this on Dawson’s Creek?” and Archie is like “look, at some point I am going to sleep with both of you, so you need to be grateful I am getting lessons from an older woman.” 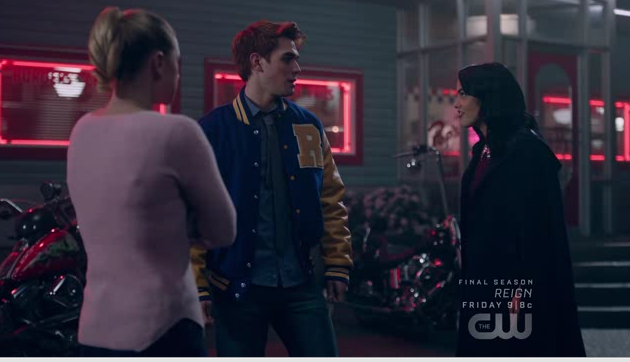 OH DON’T WORRY, VERONICA AND I HAVE BEEN PRACTICING TOO.

AND YOU WOULDN’T BELIEVE THE THINGS I LEARNED FROM THE FAN FICS, RONNIE.

(Remember when I said I would not just shamelessly ship the two of them, because I don’t.)

In the lockbox, they find an ID revealing that Mrs. Grundy is actually named “Jennifer Gibson.” They also find a revolver, which Betty confiscates for her personal use. However, Betty fails to account for the fact that her mother is an abusive narcissist physically incapable of respecting anyone’s privacy, and who regularly goes through all her daughter’s possessions. 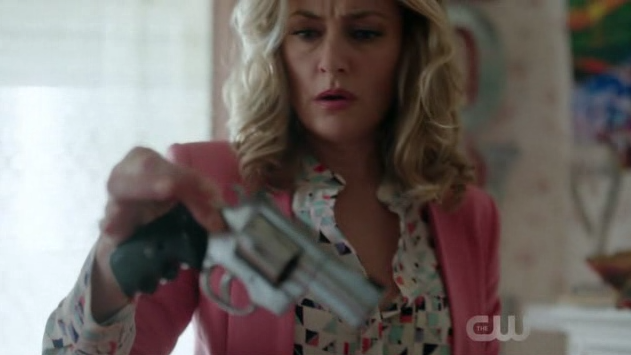 IF SHE NEEDED AN UNTRACEABLE GUN, WHY WOULDN’T SHE COME TO ME???

Meanwhile, Archie is concerned enough that he does ask Grundy who she really is, and she’s like “I’m a battered woman, on the run from an abusive husband!” And Archie is like “Really?” And Grundy is like “I mean no, but let’s have sex.”

They’re finally about to break things off and enter into more age-appropriate relationships when Betty’s mom shows up with Betty and Mr. Andrews in tow. 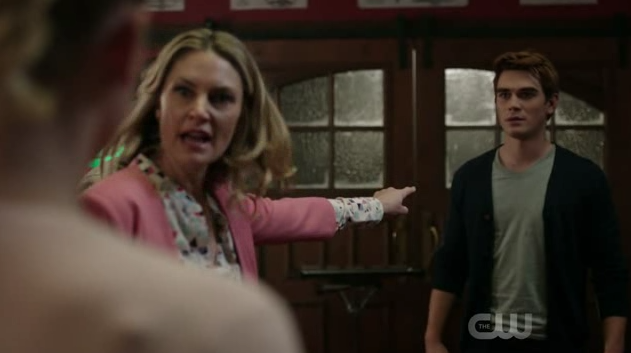 But Betty cannot tolerate threats against her beloved, so she threatens to go full Mistress Betty unless her mom backs off. 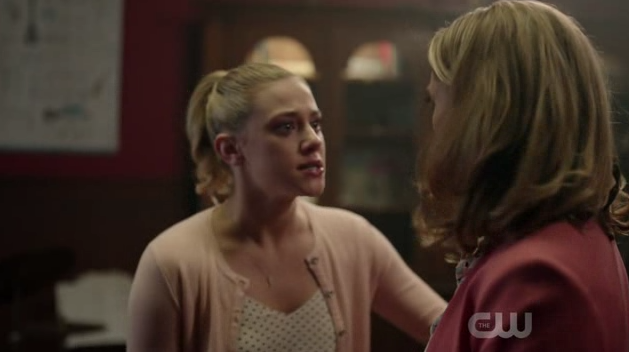 I HAVE THE POLLY WIG AND A BOTTLE OF MAPLE SYRUP IN MY LOCKER, AND SO HELP ME, I WILL USE THEM.

Truly terrified of all these people, Geraldinnifer is like “fuck this, I quit,” and walks out of Riverdale, hopefully forever. (Though as she goes, she inappropriately ogles some more high school students, which is a crucial moment in confirming that the show never condoned this relationship.)

Okay so that’s the A story of the week, but the B story is so much richer, because it provides some much-needed insight into Jughead’s misanthropy, and cracks open his scowling exterior to reveal a scared, angry teenager still in his Quentin Tarantino phase. 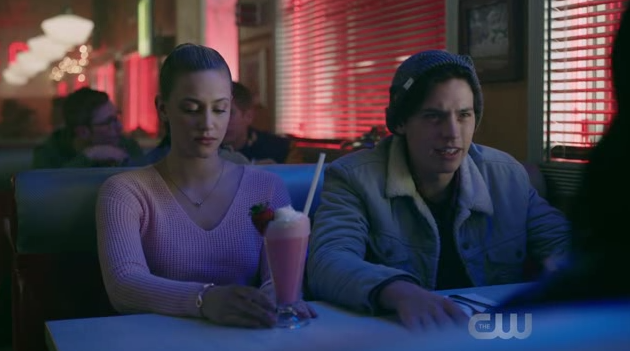 NO! I HAVE NO FEELINGS! DON’T ANALYZE ME!

Jughead spends the week campaigning against the closure of his beloved drive-in movie theater, which serves as his oasis and “home away from home.” It’s also a really perfect metaphor for him as a person, clinging to a ragged sense of authenticity and watching the action play out before him from a distance, needing the control of spooling out stories for other people to watch. But an anonymous buyer has purchased the drive-in, and the gang’s big outing is to the final film screening (which gives the episode far too many chances to indulge in its weakness for classic cinema references, which I personally get but must be lost on its target teenage audience). Jughead suggests they show American Graffiti (revealing his deeply sentimental streak), Veronica suggests “something with Cate Blanchett” (CAROL CAROL CAROL), and Kevin takes the easy gay layup. 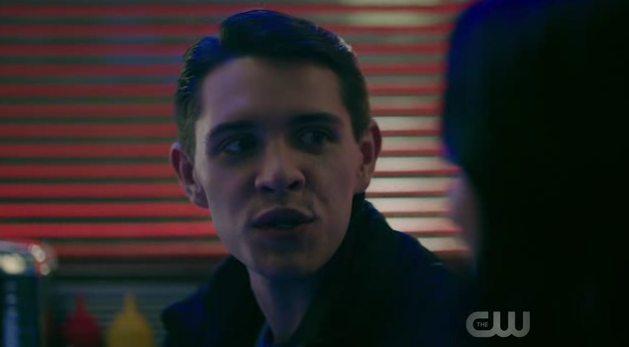 OOH LET’S WATCH WHATEVER HAPPENED TO BABY JANE! I WANT EVERYONE ELSE TO BE ON THE SAME PAGE AS ME WHEN “FEUD” COMES OUT!

It turns out that the drive-in has become a bit of a cesspool for local biker gang “The South Side Serpents.” Which, I don’t know if these guys existed in the original comics or what, but THERE’S A SOUTH SIDE? THERE ARE PEOPLE WITH TATTOOS?? Veronica sternly admonishes the criminal element to keep their voices down, but Kevin shares a moment of fateful eye contact with one of the boys. They meet behind the concessions stand and have a tryst, despite their Montague/Capulet vibe. 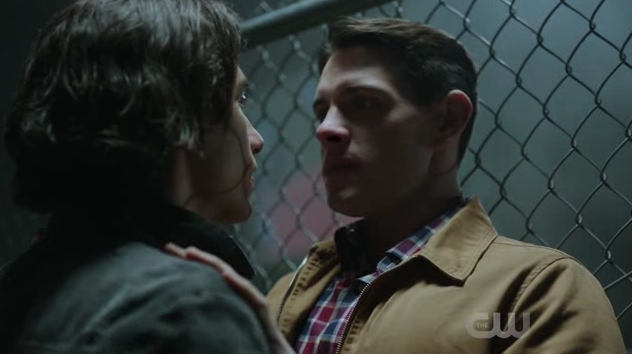 I FELL IN LOVE WITH THE LEADER OF THE PACK.

While Kevin is gone, Cheryl gifts us with my favorite moment of the whole episode, in which she, MERE HOURS AFTER CALLING VERONICA’S MOM A HAG, climbs under the same blanket and demands they cuddle. 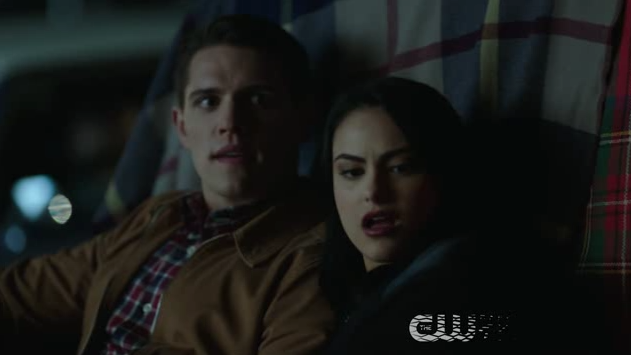 I THOUGHT YOU HATED ME. 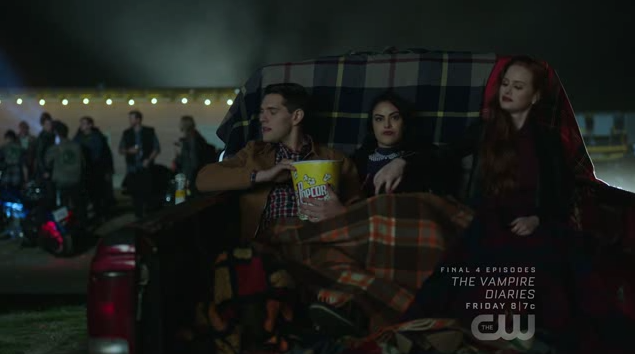 It’s all very entertaining, and there’s some good grownup stuff too with Hermione Lodge, who it turns out is using her big bag ‘o cash to buy the drive-in on behalf of her husband.

But the part that really brings it home is the morning after the movie, when Jughead leaves the drive-in for the last time, and the camera slowly pans over to reveal the cot in which he’s been sleeping. Because Jughead isn’t some spoiled Riverdale kid rebelling against his own perfection: he’s homeless. 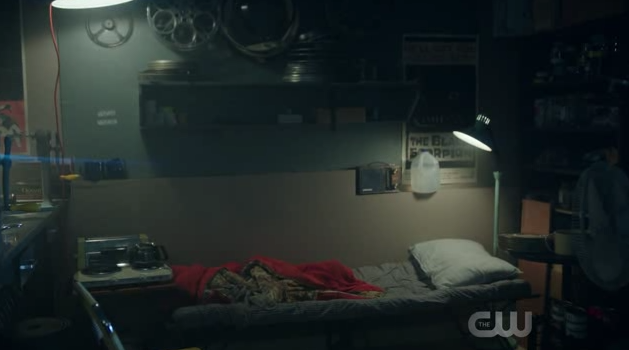 CROWN WITHOUT A KING.

Outside the drive-in, Jug runs in to his dad, who turns out to be a member of the South Side Serpents. Papa Jones asks where his son plans to live now, and Jug just shoulders his backpack and says he’ll figure it out.

Join us next week when, I have decided, Cheryl with hook up with Ethel Muggs. (I know no lesbian stuff has happened yet, and I don’t know when it will, but it’s like walking through the desert; it’s too late to turn back now so we just have to hope there’s an oasis up ahead soon.)