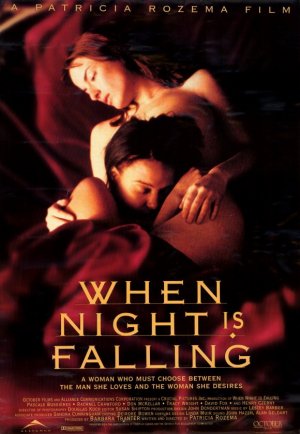 Hello and welcome back to Sapphic Cinema, the column series where we will eventually review every lesbian movie ever made.  (Except Blue Is The Warmest Color. I promise you right now we will never be discussing that spaghetti-stained pile of French garbage.)  This week, we return to 1990’s Canada: a time and place so earnest and dressed so practically, it’s small wonder that we owe it many of our classics.  So put on your favorite zippered top, hop aboard a hanglider and prepare yourself for When Night Is Falling.

When Night Is Falling is one of the worst movies I have ever loved with a full-hearted, unconstrained passion.  It has virtually no redeeming qualities, and yet I challenge even the most intellectually rigorous critic not to delight in it. Released in 1995, it was initially given an NC-17 rating by the MPAA on the basis of two sex scenes which now seem milder than a decaf cup of Earl Grey.

When Night Is Falling combines some of our most beloved tropes into a kind of perfect storm of queerness. It’s a combination coming out/leaving your boyfriend/abandoning your repressive faith narrative, concerning Camille (Pascale Bussières), a professor at a conservative Christian college in a part of Canada where the sun never shines. (Whatever else you might say about it, this is certainly the cloudiest movie ever made.) Camille and her boyfriend Martin are on the verge of a joint promotion at work, which is sort of baffling since A. Camille seems either bored or confused when people bring up Christianity. And B. Camille just CAN’T STOP WON’T STOP being inappropriate in work meetings. Like, she wants to talk about “orgasmic contractions” in front of her BOSS, the REVEREND. And he’s like “So that’s kind of not what we’re about here. At church.” And Martin is like “You’ll have to forgive her, she’s French.” But really she is only Quebecois, so there is just no excuse.

Her life is so dull, and her shirts so very buttoned, that even her dog runs off and commits suicide.  (Also, she named her dog “Bob,” so his death was at least partly an act of protest.) After his death, she puts his doggy body in the refrigerator(????!!!!) and goes to the Laundromat to mourn, as one does. It is there she meets Petra (Rachael Crawford), a traveling circus performer, whose shirts are zippered, thank you very much.

Petra immediately decides that Camille is the hottest woman here in the Seasonal Affective Disorder capital of Canada, and deliberately switches their laundry so they’ll have to meet again.  When Camille finds Petra’s clothes in her bag, she is overcome by the overwhelming ninetiesness of them. Which makes this as good an opportunity as any to discuss the costumes in this film.

Anyway, Camille takes Petra’s laundry over to the abandoned warehouse, where her circus is in a permanent state of chaotic rehearsal.  It’s not entirely clear what skills Petra brings to the Sirkus of Sorts, but we see her practicing Imaginary Light Juggling and Feminist Ballgown Iron Dancing.

The circus is run by a couple, whose slow breakup is the subject of a minor plot line, which would be very irritating were it not for the fact that trying to figure out the dude’s accent livens up some of the film’s duller moments, and that the lady gets a hilarious line about her raccoon act falling through because the raccoons were “so selfish.”  All the circus scenes are delightful, with people growling at each other and unicycling aimlessly, while industrial music plays to inform the audience that this is all Serious Art.

Petra brings Camille back to her trailer, and within five minutes utters the unforgettable line: “Camille, I’d love to see you in the moonlight with your head thrown back and your body on fire.”  If you take nothing else away from this film, take that line, use it, and please let me know how it goes.

Camille runs away in terror, but the next day Petra tracks her down at home, and shoots a little red arrow through her window with a note saying “sorry I was so sexually aggressive” and then on the other side, a sexually aggressive picture of her in a state of near-orgasm.  Camille finds this irresistible and invites her in for their first kiss.

I do have a bit of a problem from this seduction plot, because it taught a lot of young, impressionable lesbians that:

1. You CAN make that girl with a boyfriend love you.  Really she already DOES love you and just needs you to rescue her from her dreary heterosexuality.

2. Women find it charming when you stalk them and shoot arrows into their homes. But in reality, they only find it charming if you have a face like Rachael Crawford’s, in which case you could drop a flaming pile of dog shit on their porch and they would swoon.

Now I’m not saying I did the whole stalking/note-leaving thing in college, and I’m not saying that the girl in question did eventually become my girlfriend, but I am saying that I have bad enough romantic obsessive tendencies without shit like this exacerbating it.

Though she repudiates the kiss as an “aberration,” Camille asks, in the time-honored manner of newly bi-girls everywhere, if she and Petra can’t just be friends who spend way too much time together and touch one another all the time. And from there, it’s just a hop, skip, and a jump to Petra climbing on a pile of circus curtains and into Petra’s arms.

As far as sex scenes go, I honestly find this one disappointing.  For one thing, it’s never entirely clear what the two of them are doing, and for another they are doing it IN FULL VIEW of the ruffled trapeze artists. Also it troubles me that they’re doing it on the circus curtains, which may be the single most unhygienic surface on earth.

And well, you know the rest of the dance after this.  There’s regret, and the jilted man, and then Petra’s circus has to leave town because shockingly, Having A Lot Of Piercings was not really packing houses in 1995.

What’s really remarkable is the end, and if you haven’t seen it, please don’t let me spoil it for you.  Or do, it’s your life.

So after breaking it off with Martin (frankly I think you dodged a bullet there, old chap), Petra finally takes Bob out of the fridge and buries him (She only buries him under three inches of snow, which is ridiculous, but keep it in mind.)  Then she gets drunk on cherry brandy and passes out in the snow, semi-intentionally. AND THEN some hangliders Petra knows stumble upon her body and call Petra on the landline(?) she keeps in her moving trailer(?). Petra rushes to the scene and revives Camille with her body heat and promises to marry her or do whatever it takes to keep her from dying. Unfortunately Camille overhears this, takes it literally, and runs off to join the circus.

Now, I love a happy ending as much as the next homo, but is there any more doomed couple in the history of lesbian film? They’re not just U-Hauling, they’re taking up residence in the U-Haul.  Even Petra is like, “babe, you’re cute, but this is going to get real old real fast.”

But whatevs, you just gotta do what you do whenever your real life friends move in together too fast.  Buy ‘em an aloe plant, wish ‘em the best of luck, and then trash talk them mercilessly.

Quality of Sex Scenes: Lots of nudity, but shoddy technique.

Dead Animals: One. JUST KIDDING BOB COMES BACK TO LIFE AND BURSTS FROM THE SNOW DURING THE END CREDITS.  (He will almost certainly die again in the Canadian tundra, but we don’t see that part.)

How Many Times Have You Watched It Elaine?: Well I can quote the moonlight line by heart, so.

Available on Netflix: Sadly no.  You’ll have to get creative on this one.

As much grief as I give it, I really do love When Night Is Falling.  My face hurts from smiling just writing about it.  But don’t shoot arrows at girls, okay? They don’t like it.

Please come back next week, when we will be talking about a true classic of the genre, Desert Hearts.