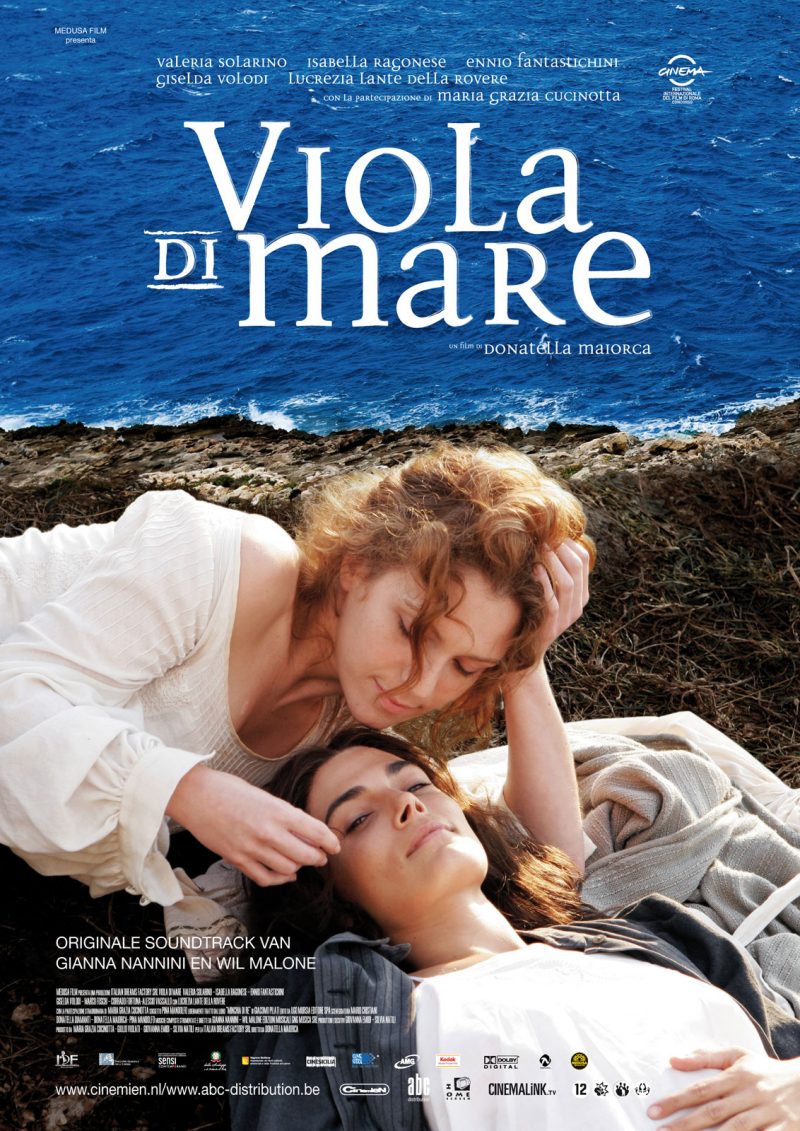 (This review was originally published on October 2, 2015.)

Hello and welcome back to Sapphic Cinema, the column series that has made my YouTube homepage the most embarrassing place on Earth. This week we look at 2009’s Viola di Mare (which translates as The Purple Sea, because I guess things are are different colors if you’re European).

Viola di Mare is a great queer film if you stop it at just the right moment.  The performances are nuanced, the production values are high, and the leads are two humans who were put on this planet to touch faces. Unfortunately, the film badly overextends itself in the third act and drags viewers from tragedy to triumph and back again.

We begin in Italy.  Not Room in Rome Italy, not even Under the Tuscan Sun Italy, but some hardscrabble little island where their only natural resource is rocks and they are running out of rocks [2019 EDIT: I HAVE SINCE BEEN INFORMED THAT THE NAME OF THIS ISLAND IS “SICILY”].

Into this rather hopeless scene a girl named Angela is born to a father who HATES GIRLS.  He wishes Angela had been born a boy and tries to punish the girl out of her, rather like the Dursleys and magic. The first few minutes of the movie are actually pretty shitty because of what a cartoonishly bad guy Angela’s father is.Among his many atrocities, he docks a worker’s wages by demanding to sleep with the guy’s wife. But he is the boss of the mine, and somebody has to yell at the men who are actually doing all the work.

Angela is a cigarette smoking badass from the age of seven, rebelling against her father at every turn and falling madly in love with her best friend, Sara. But one day, Sara’s father is kidnapped by the army? To fight in a war? The details are unclear, but Sara leaves too, and Angela sits on a rock waiting for her for ten years with no bathroom breaks.

But it’s cool because at the end of that time, she looks like this.

This, just FYI, is the only dress that Angela owns and she picked it to communicate that everyone should leave her the fuck alone or risk being turned into a newt. But then Sara returns, and these days she’s looking like this.

No one has ever been more certain about anything than Angela is certain about Sara.  Or maybe she’s tied with Noah when he was building the Ark. And her certainty seems equally, if not more insane. Lesbian love in the 1800s seems like a gesture as grand and hopeless as building a boat in the desert. But Angela can no more give up than Noah could ignore the voice of god. So she sets to work. Of course, it wouldn’t be a queer movie if the protagonist didn’t engage in some stalking behavior towards a straight-identifying girl–which in this case includes buying her a puppy–but it also wouldn’t be a queer movie if that behavior didn’t work like a charm.  So one night, in the middle of one of the dreary parades that pass for joy in this wretched place, Angela steals Sara away and they invent homosexuality.  And friends, it is glorious.

After their hookup, Angela is determined to marry Sara, but her father is determined that she marry this gross beardy guy.  Unable to reach a compromise, Papa locks her in a dungeon. A good quarter of the movie is spent with Angela clawing at the walls of the basement while Sara roams the countryside calling her name. It really looks like Angela will die there and Sara will marry a strapping fisherman, but Angela’s mom hits upon an unconventional and audacious plan. So, with the surprising support of Angela’s father, they hire a town crier to spread the news.

HEAR YE HEAR YE: ANGELA IS ACTUALLY A DUDE NAMED ANGELO. WE WROTE HIS NAME WRONG ON THE BIRTH CERTIFICATE AND JUST NOW NOTICED THE TYPO. ANGELO IS THE BOSS OF THE QUARRY AND IS MARRYING SARA AND WE DARE YOU TO SAY A GODDAMN THING ABOUT IT.

None of these characters know the words “trans” or “genderqueer” so we can’t ask them where Angela/Angelo falls. For her part, Angela seems to have mixed feelings about the arrangements. Like, it’s cool to have some power and autonomy but also they don’t make chest binders that don’t cut off your air supply. The townsfolk are pretty chill about it though.

There are some grumbles, but mostly, people agree that Angelo looks damn fine in a suit.  It takes a little while for Sara to believe that this can really work, but soon wedding bells ring for them.  When they arrive at their new home, Angelo is like “Ooh check me out I’m a man.” And Sara is like “Baby, I agree that gender is a construct but your boobs are real so let’s get naked.” And friends, they do.

And the movie should really fucking end there. I mean, adversity has been conquered, true love has won, and the Death Star of the gender binary has been exploded.

Beardyface tries to rape Angelo in a truly harrowing scene, but she is rescued by her father (BOY I AM GETTING NERVOUS PICKING THESE PRONOUNS). It gets really confusing because as much as Papa Bear was a monster to his daughter Angela, he doesn’t totally suck when it comes to parenting his son Angelo.

But then Angelo’s father and aunt both drown in the village well (They were having an affair and also her aunt kept a dead baby in a jar. There’s way too much going on in this movie.) With the town boss no longer enforcing acceptance, Angelo and Sara’s position is no longer so secure.

It’s hard to tell the degree to which they decide to have a baby simply because they want one or to make Angelo’s maleness undeniable.  They enlist Sara’s old fiancé to have sex with her, in a devastating scene. Her courage and commitment is nearly as remarkable as Angela’s and Isabella Ragonese’s performance is open-hearted and lovely.

AND THEN the baroness hits on Angelo and the baroness is pretty hot and says sexy things about absinthe.  But Angelo resists temptation (barely) and our OTP is back on solid ground.

They play with their dog and comment on the pregnancy and it is a pretty day in Italy AND THE MOVIE SHOULD REALLY SERIOUSLY END THERE. BUT IT DOES NOT.

As impossible as it was to be a historical queer, it was pretty hard just to be a historical woman, period. Specifically, god forbid you have the temerity to get pregnant in the time before medicine knew techniques other than “let some of your blood out and see if that helps.”

Sara dies in childbirth. After having faced every conceivable obstacle to their love and surmounted them all, the commonness of this death is particularly cruel. And at the funeral, Angela appears in a dress, either reclaiming her womanhood or choosing to appear one last time for Sara the way she always saw her. It’s fucking brutal.

Finally, and most ambiguously, the film ends with a title card claiming to be based on a true story and also referencing a type of fish that can change its sex.  So make of that what you will.

But stop it at that dog scene and it’s a great movie.

Sex scenes: Two but also every time they look at each other?

How many times have you watched it, Elaine: Two with subtitles, but I originally watched it in the original Italian and was even more confused by the aunt character and her jar baby.

Is it on Netflix?: The only place on the whole internet you can watch this sucker is Amazon. Trust me.

Moral of the story: Thank your lucky stars you have doctors and the internet.