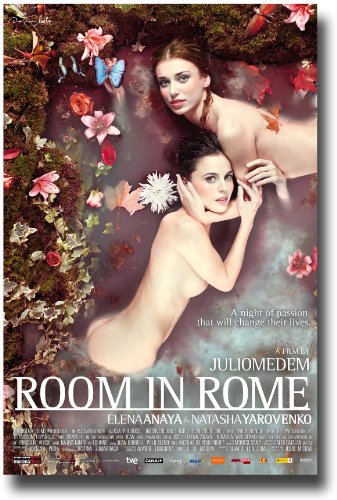 I may be the only lesbian on Earth who likes Room in Rome.  Its Netflix rating, which you’d think would be buoyed up by our demographic (or at least straight guys who dig the nudity), is a paltry two and a half stars. I was talking to an acquaintance recently, and she listed it as an example of everything that is wrong with lesbian cinema (“Doesn’t one of the chicks, like, get shot with an arrow?”). But to hell with you all, I like Room in Rome and I’m only a little bit ashamed of it. Perhaps you have to be a hopeless romantic. Perhaps you have to have been single for a lot of years. Perhaps I  have unforgivably bad taste and after this none of you will ever trust me again, but I have to speak my truth.

This is going to be a little different than my other Sapphic Cinema columns, because I have no intention of peppering it with little anecdotes about the film. I don’t want to know if the two actresses hated each other in real life, or if the director is a creep, or if the entire film is an extended metaphor for the intersection of rationalist and romantic ideals. Please no one explain to me the significance of the paintings.  This is a film I just need to meet me in my secret heart. I trust you can all relate to that, and for some of you that film is When Night Is Falling, so I don’t think you’re in any position to judge.

Room in Rome takes place in one hotel room (and bathroom and balcony and a tiny bit in the hallway) on the night of the Summer Solstice. It begins with what is about to be YOUR FAVORITE SONG. I mean, it had better be your favorite song, because it will be playing on repeat (along with some alarming Italian shrieking) for the next two hours of your life. The name of the song is “Loving Strangers” and the words are “loving strangers, loving strangers, loving strangers, ahhh.” What it’s about, I couldn’t tell you, but I think it has something to do with hating strangers.

As the song fades (for the nonce) Alba (Elena Anaya) and Natasha AKA Dasha AKA Sasha (Natasha Yarovenko) stumble home from a bar where they just met. Natasha is Russian and Alba is Spanish, but they’re both speaking English (which when you think about it, is a pretty great metaphor for the fact that we all speak our own internal languages and are attempting to find some way of bridging the divide with a shared vernacular).

Alba is drunk enough that she’s not 100% sure what her companion’s name is (an issue that just gets more complicated as the film progresses) but she is 100% sure that she wants to take her up to her room and hang her dress off the balcony.  At the beginning of the film, Alba is doing that whole Mckinnon-as-Bieber thing that I think we’ve all been guilty of confusing with “charm” at one time or another.

But Alba is real, real cute, and it’s clear that behind their awkward flirtations, there’s something troubling each of them. Natasha (SHA!), for her part, is a giant blonde Amazon with ice-blue eyes and unspeakably perfect lingerie. She’s never been with a woman before, so when she asks “would you like to see me naked” it’s not bad writing (or it’s not just bad writing); it’s that reframing of a sexual encounter that women have to do when they’re not performing for men anymore. (I can justify pretty much any decision in this film, as you’re about to find out.)

So Alba is like “YES UH HUH I WOULD LIKE THAT A GREAT DEAL.” And they get naked and just kind of stare at each other for a while: two equally exquisite, and utterly different, types of beauty.

And then they start kissing, but it’s TOO INTENSE for Natasha, which I can totally relate to.  When I realized I was gay I had to stop the whole encounter because I THOUGHT I WAS HAVING A HEART ATTACK. So Alba passes out and Natasha sneaks away, sensing she just dodged a life-changing bullet.

But she is scarcely out the door before her phone starts ringing, with a ring tone so godawful it almost makes me write her off as a human being. She comes back to get it, and Alba yanks her back into the room, and we’re back at square one.

Except this time, Alba pulls out a map, and the soundtrack does this thing where it gets all serious, as though something profound is taking place, even though really they are just looking at a touristy cartoon map. (Get used to that soundtrack thing. At one point there is some butt-touching and the soundtrack gets all screechy, and you’re like “OH MY GOD IS THAT HAND ABOUT TO GO IN THAT BUTT, BECAUSE THE MUSIC IS TELLING ME THAT IT IS.” It does not, but it’s a roller coaster of emotion.) Anyways, the map thing is just SO EROTIC that they get naked and have sex.

Now, I’ve heard people complain about the amount of sex and nudity in this film, and I would like to rebut those arguments one at a time.

1. The nudity: If I was shaped like either of these two actors, I would be nude all the time. I would start an anti-clothes rebellion. Also, being grossed out by nudity is just so American.

2. Yeah there’s a lot of sex, but it is never gratuitous. It is hot, it’s even titillating, but what the fuck is wrong with that? It furthers the plot and their relationship every time.

After the sex, the mind games kick in. It’s like they’re playing two truths and a lie, or perhaps vice versa.  Alba is like “Alba is actually the name of the daughter I aborted because her Saudi Arabian Prince father hunted me down and stole my horse.”

And Natasha is like “Oh cool well I’m a famous actress and also a famous tennis player and also an expert on the Italian Renaissance, so.”  My best attempt at justifying this is that it’s a microcosm of all relationships. At the beginning, we all put on our best bullshit charm offensive, and then we spin some tales about a version of ourselves that may or may not really exist, and then, in the rarest cases, we trust each other with our real deep dark shit.

But they can’t let the lies go. They insist on verifying each others’ stories via (and this is the most unrealistic part of the whole film) Bing.

Eventually they reveal the truth. Alba’s truth is that she has a live-in partner, whose son died last year, for which Alba partially blames herself. (Also Alba turns out to be a mechanical engineer who invented a little scooter, which is just too goddamn precious for words.) Natasha’s truth is that she actually is a famous tennis player and also a Renaissance scholar? But also she has an identical twin? Who was abused by her father, but it gave Natasha an inferiority complex? It’s pretty dark and twisty, but then again, so are a lot of peoples’ first encounters with sex.

Some other odd things that happen:

1. That whole bit about the Renaissance and paintings and Greece or whatever. What is that about? Who cares? Stop talking.

2. The real creepy angels on the ceiling who keep pointing arrows at them like “YOU ARE GOING TO FALL IN LOVE WHETHER YOU LIKE IT OR NOT.”

By the time the first rays of light stroke their fingers across the sky, Alba and Natasha have fallen in love. Which: yes, is insane.  But these two actors are as naked emotionally as they are physically, and goddammit they make me believe it. Every time Alba gets sad, Natasha looks like she will weep in sympathetic pain. And every time Natasha smiles, Alba looks like a Christmas tree light-strung within an inch of its life. And like Alba says, love under any circumstances is half fantasy.

The question is: what do they do with the fantasy when the sun comes up and the night is over?

THEY STAY TOGETHER FOREVER, IS WHAT.  A lot of people will tell you that the ending of Room In Rome is “ambiguous,” but those people have no souls.

Look, I’m the first person to admit that this is a ridiculous movie. But life is hard and love is harder and I just want to believe that at some point in my life I will allow myself to be so vulnerable that I let another woman put fluffy slippers on my feet. And if you’ve never been in love so hard and so sudden that you needed help pulling a metaphorical arrow out of your chest, then I pity you.

Quality of sex scenes: Overall very high, with the exception of the wine bottle, and a 69 executed with a degree of finesse I find improbable.

Musical Numbers: YES. THEY SING IN ITALIAN AT EACH OTHER IN THE SHOWER AND EVERY TIME I WATCH IT MY HEART COMBUSTS.

How many times have you watched it, Elaine?: I can’t answer that question truthfully, not even to myself.

But will they stay together: Yes. Obviously. Forever. And when they die, their spirits shall become a constellation in the sky, eternally embracing and ordering room service.