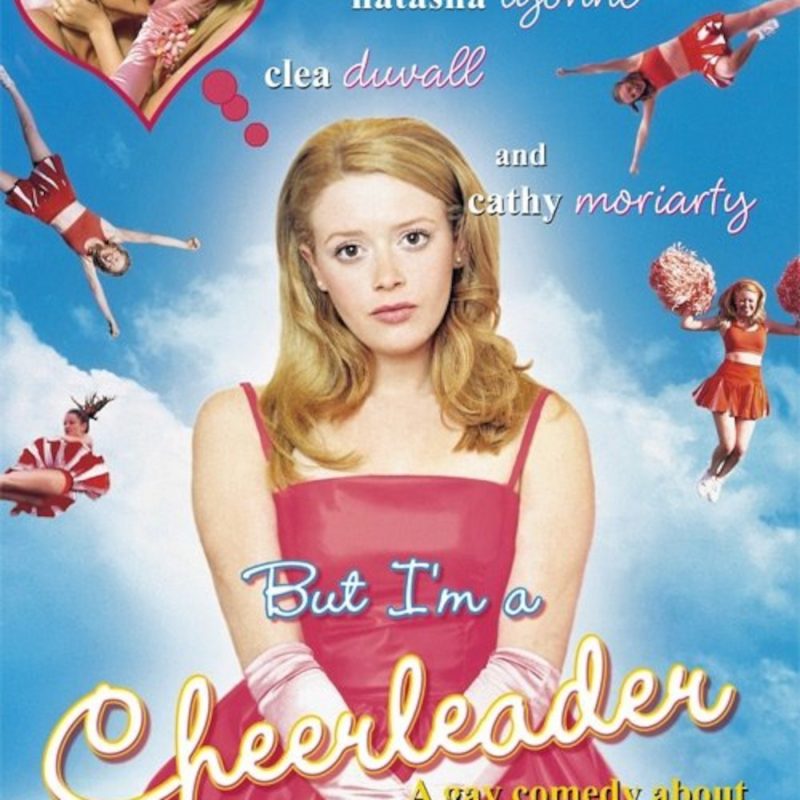 (This review was originally published on September 25, 2015.)

But I’m A Cheerleader is one of the five best lesbian movies ever made. I’m not telling you what the others are, but I’ve preemptively dusted off a spot on the podium for Carol; I pray it earns it.

Now, it has long been my belief that most of our acknowledged classics try to tell small stories with great love. Imagine Me & You works so well because it is doing something very simple: the prototypical romantic comedy. (I’m not knocking it, by the way; lesbians deserve an easy-going, watch-it-during-your-worst-period rom com as much as any other subset of women.) But I’m A Cheerleader, on the other hand, goes in a different direction. Specifically it goes to the John Waters carnival and boldly asks to join the sideshow.

Made in 1999, it’s several years older than many of our previous selections, and yet it feels fresher than nearly all of them. That’s partly due to its retro vibe (make something an homage to the past and it’ll never be dated) but mostly because of the breezy way it deals with queerness. It was utterly sure (in 1999!) that the gays were going to win the culture wars and the homophobes were going to come out looking like giant walking wedgies. And it was almost eerily prescient; since then, Ru Paul brought drag so far into the mainstream that even he is kind of over it, gay conversion therapies are now being discredited and outlawed, and Natasha Lyonne has presumably been hit on by tens of thousands of women, bless her heart.

Our story begins with a title sequence that we would normally criticize as catering to the male gaze: bouncing Midwestern T & A. Actually, the cheerleading sequences are one of the few things I don’t like about the film, since lesbians are far more likely to fall in love with a girl’s stray curl or delicate cheekbones than FULL-ON TITS.

The girl ogling them is Megan (Natasha “tragically straight” Lyonne). It hasn’t yet occurred to Megan that it’s weird that she imagines her fellow cheerleaders (specifically Michelle Williams, the first of several delightful cameos) while her boyfriend sticks his tongue so far down her throat it’s like he’s trying to hide from the police in there. The best thing about the beginning of the film is the way Megan is determined to be the world’s most All-American High Schooler. She is more pumped about cheerleading than the Glee club was pumped about regionals, and frankly, it’s weirding everyone else out.

In spite of her unbridled enthusiasm for all things Normal, her friends and family have started to notice troubling signs: she’s converted to vegetarianism, has a GEORGIA O’KEEFE PILLOWCASE, and listens to Melissa Etheridge (Lord, thank you for letting me come of age in a time when we had more options for queer music). So her parents (Bud Cort, who played Harold in Harold and Maude, and Mink Stole, who has been in every John Waters movie ever made) arrange for a gay intervention, led by none other than RuPaul.

From there, she is hauled off to True Directions, which aims to turn young Americans not only straight, but into models of 1950s style gender roles. And in no time, Megan arrives at a painful truth.

One of the most remarkable things about BIAC is the way it appeals not only to lesbians but to gay men as well; it’s one of few films that does more than play lip service to the idea of a shared community. And it’s much richer for it, with the boys bolstering the camp quota. Of course, my favorite and everyone’s favorite is Andre (“I JUST WASN’T MEANT TO BE BUTCH.”) but I also have mad love for Dolph (who, you guys, was RUFIO in Hook) since he turns out to be an unexpected font of wisdom.

On the female side, there’s Sinead who likes pain (man, what the hell ever happened to Katharine Towne, eh?), Jan, who would like people to stop making assumptions about her sexual preference based solely on her gender presentation, and Hilary (Melanie Lynskey, who has quietly appeared in every film ever made. It’s a fact. Look it up.). And then there’s Graham.

Graham is just everything you ever wanted or wanted to be. She’s got a terrible attitude, smokes feverishly, does that thing where she only smiles with one side of her mouth, and always has the perfect amount of hair falling into her eyes.

I learned on the recent Hollywood Q Cast that Clea DuVall was eighteen years old and working as a barista when she was cast in this film. So I’m really glad I saw this movie for the first time when I myself was nineteen, so my forever crush on her is not squishy.

At True Directions, the young homosexuals are taught how to better fulfill their positions in society. Girls chug martinis and pleasure themselves with vacuum attachments, and boys quietly weep into their socket wrench sets. AS GOD INTENDED. The light way with which this film deals with its very serious subject matter is perfect, because it strips away all the religion business and exposes it as what it is: an excuse bigots make to justify their discomfort.

The leader of True Directions is Miss Mary (Cathy Moriarty, perfection embodied) and it’s unclear if her motivation for straightening out America’s youth is her own preoccupation with the female form or the gay proclivities of her son, Brock (Eddie Cibrian, whom I will always believe is a good person, based solely on his performance in this film).

But one fateful day, the kids get word that there might be another way out of their situation: a gay club called The Cocksucker. At this point, Megan doesn’t know what she is but she knows she wants to follow Graham around like a little lost duckling until the end of time. So they go to the club, which is actually a pretty realistic small town gay club except for the fact that Julie Delpy is there. I don’t think she’s even playing a part; she just wandered onto set that day and starting being French at people.

But the real magic happens outside, when Graham finally stops trying to be cool long enough to kiss Megan on the mouth. It’s been almost a decade and god knows how many rewatches, but that kiss still makes my stomach clench up. I know every beat; that first, lunging kiss, the second, failed attempt on Graham’s part, and the third one, when Megan is like “I wanna do that again,” and Graham is just exactly as eager as everyone was when they were eighteen and another girl’s mouth was its own religion.

While the rest of the film is a stylized romp, Jamie Babbit (like every other lesbian filmmaker) knows that girl kissing is serious business. Just like with D.E.B.S., the love story isn’t played for laughs; it’s played with desperate earnestness. I love that.

Anyway, Graham and Megan flirt over like eight different 90s girl-rock songs—this movie is half montage, I swear—before consummating their love in a mysterious location full of shifting pink light and a whispery song about how kissing girls can feel a lot like dying of cardiac arrest.

It’s the classic lesbian sex scene, in that you’re never entirely sure what you’re looking at, but it all seems soft and pleasant. The next morning, the jilted Sinead informs on Graham and Megan, and Megan is kicked out of True Directions.

She goes to stay with Gary and Lloyd, the helpful homos who took them to the Cocksucker. Maybe my favorite part of the whole film is when Megan glumly accepts her sexuality and asks where lesbians live and what they do (Asheville and Netflix, Megan. You’re welcome.) But seriously, I relate to that question, and the panic of realizing you’re gay a little later than everyone else, so much.

Of course, nowadays we have a lot of resources telling people just emerging from the closet that everything is going to be okay, that this can only define your life to the degree that you want it to. But in 1999, this film was one of precious few encouraging voices that promised you a future and a community. (And if you want some fascinating info about its battle with censorship, I highly recommend watching This Film Is Not Yet Rated.)

Finally, Megan goes back to True Directions to rescue her true love—again with the cheerleading, but I guess But I’m A Flautist just doesn’t have the same ring to it. And at the end, they drive off into the sunset; and this at a time when a lot of other lesbian films ended with characters jumping off roofs.

We had to wait a long time before the promises But I’m A Cheerleader made came true. We lost Natasha Lyonne to drug addiction for many years. We went through a rash of gay teen suicides. But lo, it did indeed get better. I believe this movie didn’t just predict the future, it helped bring it to pass.

Quality of Sex Scenes: Cute as a goddamn button.

Will they stay together: I feel like Graham moves to New York to be a struggling writer and Megan stays in the Midwest and starts a bakery, but they still exchange Christmas cards with a sexual undercurrent.

How Many Times Have You Seen It, Elaine?: I don’t even need to watch it anymore; I know it by heart.

Next week, someone asked very sweetly if we could do Viola di Mare, so we’re headed to Italy.