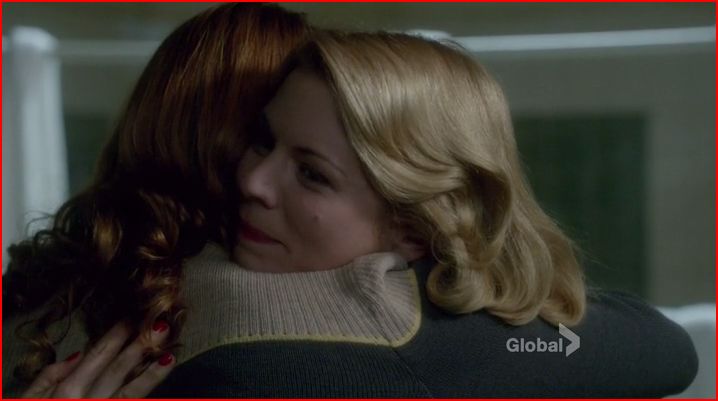 Previously on Bomb Girls, Gladys became a spy, which we never knew we always wanted, Betty fought for her right to be the gayest lady this side of Idgie Thredgood, Kate decided to give back to the world through song, Lorna missed Bob/having control over multiple lives, and Vera was perfect at all times and in all outfits.

When we open this week, the women are congregating outside the factory for their morning gossip/blissfully guilt-free cigarettes, when Vera alerts Kate to an advertisement for auditions for an upcoming show.

Kate: An “all-girl review?” Is that like the thing where you look at everyone in the locker rooms?  Not that I do that, of course.
Betty: Not “review,” “revue.” Ugh, I can’t believe I used to be into you.
Ivan: Well, whatever it is, my gal doesn’t need to be reviewing any other ladies.  No sir-ee, she’s busy tending to horribly disfigured and non-threatening men.

And then you guys, Rosie O’Donnell just butts right in and says “Honey, he’s very cute but I wouldn’t let him tell you what to do.” And as someone who requested A League of Their Own at every single sleepover until the age of thirteen, my heart just about bursts right there. Clearly I’m not the only Doris Murphy aficionado, because Betty is grinning like her very own fairy godmother just showed up.

Dottie (O’Donnell’s character, in what I really hope is a deliberate LOTO homage), is at Vic Mu to write about women in the war effort.  She immediately clashes with Lorna, who forces her to empty out her handbag which, awesomely, contains a flask.

She is even more threatened when Dottie poses the seemingly obvious question: “If cordite turns your skin yellow, what might it be doing to your lungs?” And Lorna has already lost caretaking control over her children; she is not going to let her workers be out-mothered.  So naturally she slams Rosie O’Donnell into a cart of explosives, in hopes that she will just combust.

At the canteen, the camera lingers lovingly on my favorite sign of all time

Gladys, meanwhile, is testing the creamed cauliflower for boner killing drugs, when Agent Cliff approaches her.  Her first outing as a spy is not a great success, since she talks only in a stage whisper and thinks every gesture is a secret code, but at least her accent is consistent.

Over at the other end of the caf, Betty is thinking about becoming a homeowner. Kate agrees that it would be nice to have a place to raise a passel of young’uns with a big strong man, and Betty tries to smile through gritted teeth.

And Betty really has shown remarkable restraint in not pointing out that Kate has given her boyfriend a girl’s nickname.

Upstairs, Snaky Akins informs Marco that he must now answer to Leon for security reasons. For a second, I’m afraid he’s going to say something racist, but he’s afraid he’s the victim of racism himself, on account of his tendency to sprinkle his dialogue with Italian phrases.

After work, Kate goes to audition for The Girlie Show, with a wholesome rendition of  “Molly Malone.” I really feel like all Kate’s songs are a shoutout to McAndrews shippers, since they could have had her sing “How Much is That Doggie in the Window,” but instead she is cheerfully crooning about a fine lady and her delicious shellfish.  The imagery is lost on the crowd though, and the director accuses her of looking “like little sweet miss, ain’t never been kissed.”

She responds by defiantly grabbing Ivan by the lapels and sticking her tongue down his throat. And in that moment, I sort Kate as a Slytherin. Not because I don’t like her, but because using another person as a sex prop is as cunning at it gets.  Please feel free to disagree with me in the comments.  But hey, I like this tough version of Kate a hell of a lot more than I do the wolf in Hufflepuff clothing.

Next up is a burlesque dancer who is real good at her job. Marco and Vera and I all blush and pretend not to stare.

After the audition, Kate and Ivan play monopoly, and Ivy offers ‘ol Snake Eyes a get out of jail free card if she kisses him like she actually wants it again.  So, two things:

1. I have been playing monopoly wrong my whole life.
2. If Kate starts using sex as a weapon/currency, I am going to be really afraid of her.

Luckily, Vera bursts in just as the straddling begins. Ivan wants her to leave so he can explore this new side of his girlfriend, but Kate, as always, is only too eager to escape his embrace. Vera informs her of the scandalous nature of the all-girl revue, to which Ivan expresses disapproval and Kate expresses wide-eyed excitement.