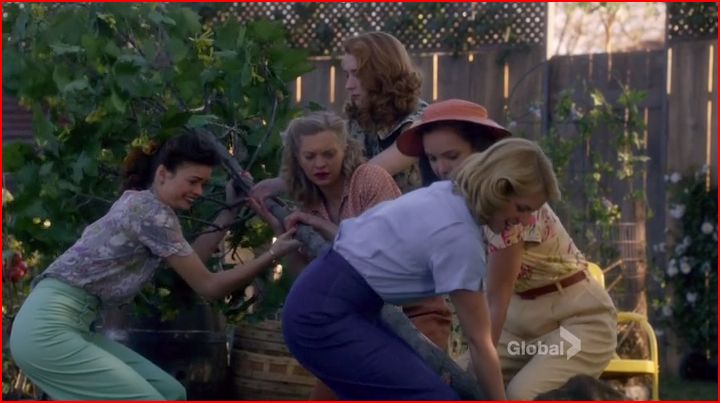 Hello my friends and welcome back to Bomb Girls, the only show in existence about a group of angels making high explosives.  I don’t know about you, but to me this episode felt like a mug of cocoa after a long day in the snow.

When last we saw our heroines, Kate and Ivan were continuing their chaste courtship, Lorna was doing an excellent job mothering everyone except the people who actually sprang from her loins, Gladys was mourning the death of her beloved fiancé  regular fiancé, and Betty was basking in sweet, sweet post-coital bliss.

Six weeks later—for once the show timeline matches real life—the Witham-Hastings clan has descended to the United States to pay their respects to James.  For some reason, they all feel compelled to assure Gladys that this is all her fault.  Mrs. Or Whatever says that James only enlisted to impress her and Mrs. Witham adds her own shovelful of guilt to the pile by complaining that this whole business reminds her of Gladys’ dead brother (we are made to understand that Gladys is also to blame for that tragedy, if only in a roundabout, existential sort of way).  Though her hair may be perfectly coiffed, rest assured that this bullshit is plunging Gladys into Spencer-at-Radley levels of misery.

Over at the Corbett residence, a full third of this week’s plot is given over to Lorna’s desire for a telephone. She says it’s so she can keep better track of her progeny, but my theory is she’s invented phone sex in hopes of making a little spare cash. Anyway, until that happy day comes, the Corbetts are forced to get news over the radio, and right now the news is: the Allies are invading France.  But this ain’t D-Day, so don’t get your hopes up, folks.

Meanwhile, at the Vic Mu Victory Gardens, Betty is instructing Kate on the proper way to pluck a (ripe, delicious) tomato.

Kate skedaddles (her word, I assure you) to go meet Ivan, who wants to act out some farm-based role play.

Back at the factory, Lorna is just straight up offering her body to the telephone guy in exchange for some service which: if sexual favors are the secret currency of the telecom industry, it would explain the dirge-like slowness of my internet.