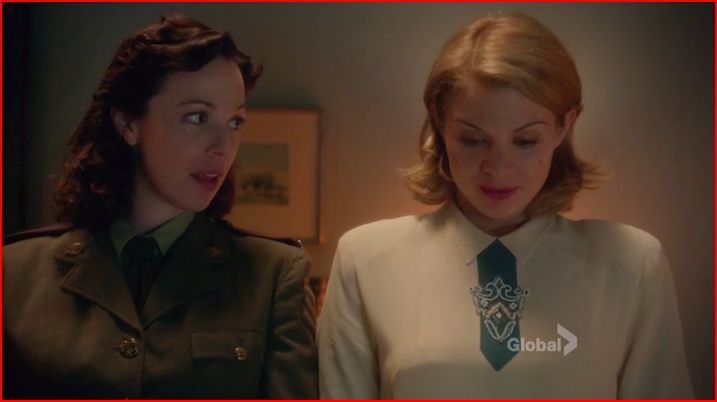 (This recap was originally published on February 7, 2013.)

OH MY GOD YOU GUYS.  THIS EPISODE.  I mean, I saw the preview and it shook me up but I strutted right up to this episode like a cocky little Reggie and said “here are my feelings, take your best shot.” And then Bomb Girls, (because it is Bomb Girls) launched 10,000 fireworks straight at my heart.  I am writing now with the happy, smoldering remains.

As a brief re-recap: Vera has been sent from the feminist utopian future to save the world through sex.  Kate and Ivan are going on dates, where they do not speak at all but just make baby animal faces at each other (Deer! Chipmunk! Green-eyed kitten!).  Betty has been spending a lot of time in the secrets cage, making mix cds for Kate but never giving them because “Call it Off” hasn’t even been written yet.  And Lorna and Gladys, head girls of Slytherin and Ravenclaw, are going to war over the soul of Eugene Corbett, which may or may not be worth the effort.

In the unknowable amount of time since last week, Eugene has left and gone on his “victory tour,” presumably picking up several new and exciting diseases on the way, and Kate has founded her own little singing trio.  Naturally all they sing are Witham’s Foods advertisements, since Gladys’ family has a stranglehold over all cultural life in the greater Toronto area.

While they rehearse, Betty rushes to the aid of a brunette lady in uniform, to help her fix a door.  If you’ll recall, that is exactly how Betty and Kate met, but this isn’t just any door.  This door leads to Narnia, I swear to God, and Narnia is a place where all the women look hot in uniforms and speak only in sexual innuendo.

Meanwhile, Eugene has come back to town with Didi Burke, a movie star who acts like a lot of movie stars which is: has not seen her own films, scornful of the fact that you have.  She and Eugene are visiting wounded veterans, but Gene can’t bring himself to speak to them.  It seems that despite the barrier of douchery he has built around himself (the douche-dyke if you will), the horror of war is starting to hit home for him.  The last distraction left to him is pain, so he burns himself with a cigarette and hopes that someone sees how fucked up he is.

Luckily Edith and Dr. Patel do, but their suggested course of treatment is to tie him to a bed in a medically induced coma.  If this were the Eugene of two episodes again, I would agree, but damn if I don’t have a soft spot for damaged warriors.

Back at the factory, Snaky Akins is trying to get folks excited about the War Bonds drive.  Vera suggests “something that screams ‘Vic Mu!’

Naturally, she is put in charge of planning the party, and all parties, forever.

That evening, Gladys discovers that her father has stopped paying the rent in her penthouse suite, which is exciting, since rich characters typically get a lot more interesting when they are forced to live without their money.  She calls James to 1.complain and 2.confess that she almost found out what, if anything, is under Eugene’s uniform. She is interrupted in this far from noble endeavor by an explosion on James’ end.  He dons his little hat and runs straight for the big noise.

Later thatnight, Ivan and Kate jitterbug at the Jewel Box while Betty looks on with an expression of pained resignation.  Just then, our lady in uniform (we never learn her name but the Lesbian Blogging Community has informed me that it Teresa and her favorite color is green and she usually likes to be the big spoon but is, you know, flexible) sits down next to Betty.

Teresa: So judging by the Nails, Shoes, Swagger trifecta of dyke identification, you want to have sex with me, right?

Betty flees the scene with the terror of a born pursuer who is suddenly pursued.