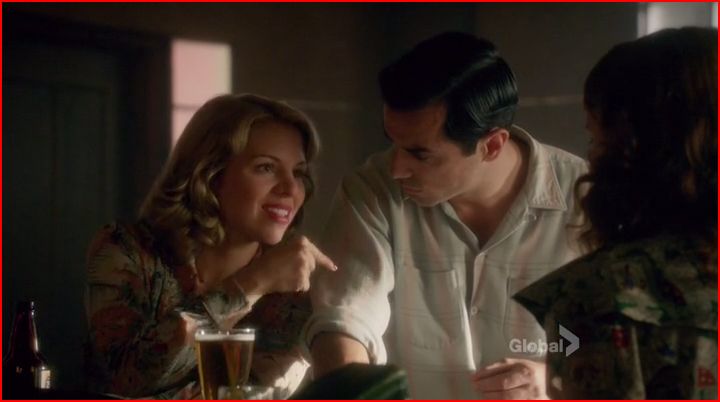 Again and as always, I am in awe at the thoughtfulness and kindness of your comments.  I’d like to address an issue that a lot of you brought up last week, which is the matter of the escaped Nazi.  I thought that the Nazi divined that Betty is as gay as Marlene Dietrich, and y’all said that all he really figured out is that she is as German as Marelene Dietrich. Upon further consideration, I think you’re right, and huge thanks to AE site moderator Harpy–she translated scene after scene of German dialogue, at great risk to life and limb–for making my further consideration possible

HOWEVER.  I noticed several of you were surprised that Betty turned the Nazi in, because you wanted her to keep him like an injured rabbit in the secrets cage, sneaking him jars of pickles and nursing his wounds. Well I hope those of you who feel that way are never forced to judge the sincerity of a crocodile because 1.HE TRIED TO STAB BETTY WITH A SHARD OF GLASS. And 2. He is a Literal German Nazi.  Moving on.

It’s a beautiful morning at Vic Mu. A busload of new recruits has just arrived at the factory and Gladys, Betty, and Kate are carpooling, looking like a street gang or the Feminist Planeteers. (Betty: “The Power of Swagger! Vera: “The Divine Force of Fabulous!” Gladys: “The Hawk of Justice!” Kate: “That Thing I Do With My Eyes!”)

Everything is just so right with the world and then.

To understand what Gladys is going through this episode, and I am trying very hard to understand it, we need to flash back to their exchange last week, when Eugene performed Evil Psychoanalysis on Gladys.  Evil Psychoanalysis is a technique most commonly used by supervillains in their “Join me and together we shall rule Gotham” speeches.  It involves finding the selfish motivation behind every act of altruism a hero has ever committed, which unfortunately, it is all too possible to do, since every person alive is motivated by self-gratification.  Even more unfortunately, there is something seductive about someone reaching into your dark, hidden heart.  It can come as something of a relief, but it shouldn’t be mistaken for true insight into one’s character because, as Albus Dumbledore said, “being a tough motherfucker does not a Slytherin make.” Gladys has to learn this one the hard way.

When Betty enters the factory, it is with the springy step of a woman who knows that in any busload of women, two of them are gay, and five more will drunk make out with you.  The very first girl she interviews “goes by Reggie” so yeah, I think we caught one.  But rather than instantly bonding and organizing a rugby league, Betty and Reggie circle each other with their teeth bared.  Reggie is convinced she can be the hot new item in the giant gay bar that is Vic Mu and Betty thinks not if she gets her kicked out for being underage.  Truthfully, though, I don’t get why Betts and Reg have such an immediate dislike for each other, unless it is because they recognize the same vulnerability and the same secret in each other.  When Gladys cuts herself on an improperly sanded bomb (and this whole time I thought they were just massaging them!)  Betty immediately blames Reggie.  Whoever did it is on my permanent shit-list because Gladys’ injury allows this to happen.

After work, Betty, Kate and Marco grab a drink at one of the roughly three thousand bars this show uses as locations.  When Marco observes Kate’s attempts at flirtation, which consist of dousing a fella with gin and then dabbing it off, he steps in.

Marco: Alright, you gotta show a guy you’re interested.  If you don’t, men will definitely not hit on you all the time anyway.

Kate: But how do I do that?  I don’t even know the sexy parts of the bible to quote at them!

Marco: Just listen to them as if they are speaking a secret gospel, follow their every move with your eyes, and touch them literally at all times.  You know, act like you do with Betty.

And y’all, Kate’s eyes are really her superpower because when Marco says this they send out a wave of sadness so powerful that at that moment, Mighty Casey strikes out.

Over on a beach, which is not a thing I think of Canada as having, Gladys and Eugene are trading scar stories–which any lesbian knows is foreplay–but the thing is: Gladys doesn’t have any.  Her porcelain skin is unmarred, save for today’s accident.  I believe this is the writers’ way of explaining why this escapade with Eugenie and a Bottle is vital to her development.  To someone as tightly wound as Gladys, losing control is the ultimate drug, as many of our favorite characters have proven in the past (See: Buffy and Spike).  When she runs into the glacier-strewn water with Eugene, it reminds me a lot of early Spencer and Toby.  But we all know how that turned out.

But then, when Betty confronts Reggie about her age, the oranges turn lethal.  Reg hurls one right at Betts’ back.  And even though this scene reminds me of both A League of Their Own and Fried Green Tomatoes, I still don’t get why Betty is waging a vendetta against the poor baby dyke.

In other horrible news, Kate successfully hits on Ivan and Gladys, disgusted with the direction the party has taken, sneaks out with Eugene.They go speeding down the highway in her fiancé’s car and this is the strangest episode in history because I am mad at Kate and sorry for James.

Eugene isn’t happy until he nearly kills them both.  Gladys is initially furious, but the adrenaline has gone to her head and soon she and Eugene are ripping off each other’s clothes.  Let that sink in for a moment.  Gladys Hastings-Witham, the paradigm of justice, is hooking up with a man who advocated the murder of German POWs.  It is a moment of such wrongness that birds fall from the sky, children scream uncontrollably, the seas boil, and earthquakes rumble as far away as Mars.  Then a cop shows up in one of those rare television moments when you’re like “oh thank god, the police.”

Back at the party, Carol does the worst thing and attempts to publically humiliate Vera for her holy mission to provide sexual pleasure to all of Canada.  Because she is descended from angels, she turns the joke around, but not before it costs her the promotion. And guys, can we talk for a minute about how far Vera has come from a woman I devoted exactly one sentence to in the first recap?

She has gone through injury and depression and emerged as the most consistently amazing character of season two.  Anastasia Phillips brings strength and class to every moment, and the writers go out of their way to shame the slut-shamers.  And the best thing of all is that even when the tears are smearing her makeup, the words she utters are “I’m not ashamed of any of it.”

And now for the scene I can’t stop thinking about. Betty McRae is letting Kate paint her nails bright red, merely so their hands have an excuse to touch, which is the saddest thing I have ever heard of.  Kate takes this opportunity to confess that she and Ivan are going on a date, and even has the audacity to ask Betty to help pick out her outfit.  Betty gives her the whole “oh no, you  should totally go for it” speech that was probably written by Sappho during her first best friend crush.  But her face (in addition to being black and blue) is a mask of confusion because how could something so terrible be happening to her heart while something so wonderful is happening to her hands?  And Kate, I love you but this is some Alison DiLaurentis shit right here, and you are just not allowed to treat Betty McRae like Emily Fields.

Sure enough, according to next week’s promo, Betty finally confronts Kate about that kiss and, presumably, her lack of understanding of lesbian nails.

See you next week, and I promise to bring extra bourbon and kleenex. And no bloody oranges.