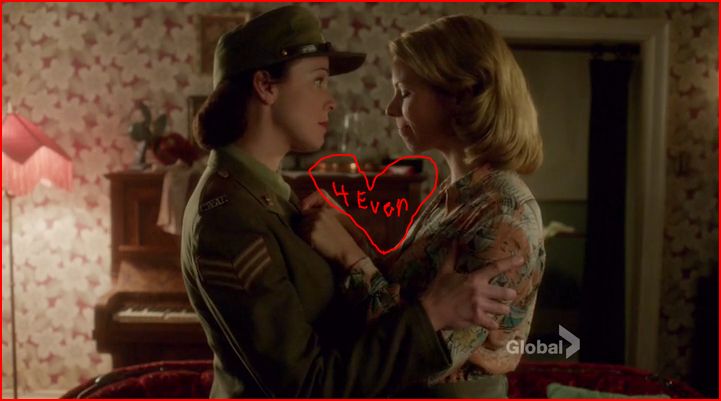 Previously on Bomb Girls, Marco Moretti was having a Really Shitty War. I haven’t talked much about Marco’s experience because there was always something more pressing — Betty making a face or Gladys wearing a dress — but here are the facts: Since Season 1 Marco has been beaten up by multiple guards and one drunken soldier, has watched Lorna miscarry his offspring and dump him, and generally has had to cope with being the only chic, cultured man in a country full of people who don’t even know what spaghetti is. The man’s self-esteem is at rock bottom, and I have tried to let that knowledge inform my opinion of him this week, because for the first time, I really want to like Marco, if only so my feelings can be in more perfect harmony with Vera’s.

When we arrive at Villa Moretti, Marco is engaged in a penis duel arm wrestling match with his awful new friend, Frankie.

The fun is interrupted, thank god, by the arrival of Marco’s adorable mother, who comes bearing ill tidings: she has just been forcibly removed from the grocery store for getting her Italian hands all over the produce. And what empire of food could toy with human dignity with such callousness? Why, Witham’s, of course.

Speaking of Witham’s, the heiress to the bean bomb throne is doing her duty for His Majesty with “Clifford,” who apparently carries a little cloud of film noir with him wherever he goes. The mission is Marco, who Cliff says is getting too close to known fascist sympathizers. Gladys is like “whuuuut” but sure enough, awful Frankie slips him a pamphlet called “Fascism: Is it right for you?”

The next morning at the Corbett residence, Reggie has fully embraced her role as “Bob’s replacement,” and is reading the paper while Lorna hangs Reggie’s laundry. It seems that the Germans sunk a passenger ferry off the coast of Newfoundland, killing dozens of civilians.

When the milkman(!) arrives, Lorna scolds him for leaving all the dairy out in the open, because “naughty neighbors steal my cream” (AHEM). The milkman promises never to do it again, with a glint in his eye that says “I’d like to explore this whole domination thing.”

At the factory, the girls are discussing the recent ferry bombing (and Betty is wearing what I assume is her “sad” dress), when they stumble upon Ivan and Kate’s wedding announcement, in the form of a cartoon that says more about their relationship than I ever could.

Ivan thinks this whole business is so swell that he wants to put an announcement in every paper in Canada, to which Betty makes a face like she’s going to deck him or at least use that “Ivan Butt-chinsky” joke she’s been holding on to.

And if you thought things couldn’t get worse, they instantly do, as Teresa marches out of the factory and on to her new assignment, with barely a word of goodbye for her bomb girl. And Lorna, rather than giving Betty the rest of the day off to weep/drink, puts her in charge of quality control on the line.

At lunch, Betts overhears Kate weaving a yarn about her dear old dad, the veterinarian, and glowers at her. The part of the “making it official” thing Kate has really latched onto is the idea that anything published in the paper automatically becomes solid gold truth. Ivan laments the fact that Kate’s parents won’t be at the wedding, to which Kate replies “it’s something I can live with,” which, incidentally, is also what she would say if she had to write her own vows.

After work, Marco ditches Vera to go hang out with the bad kids, which is the first sign that his priorities are dangerously out of whack. Gladys bounces up to score some intel.

In the Vic Mu ballroom, Lorna walks in on some dance lessons hosted by the milkman, who is every bit as shady as his profession’s reputation would suggest. He takes her through a foxtrot, which of course she dances with the grace of an actual fox.

Having failed to make inroads with Marco or Vera, Gladys next tries her sleuthing on Marco’s mom. She apologizes for the awful treatment she received at Witham Foods, which I have to believe she would do, with or without a mission, but when she spots Marco’s fascist pamphlet, she snags it.

Marco, meanwhile, rolls up to the Witham warehouse with the rest of the thugs, who propose they steal some groceries, to teach those stupid English-Canadians, that Italians really can be trusted. This reminds me of some dumpster-diving experiences from my college days (leave me alone, I was experimenting) so I don’t judge it too harshly until a guard shows up, and they start beating him to a pulp. At first Marco tries to intervene, but when the guard punches him, he punches back. Then everything gets out of hand and Marco suddenly looks like he’s 14 years old, just confused and scared and trying to be one of the cool kids. He just takes an armful of kale and gets the hell out of there, leaving the guard unconscious.