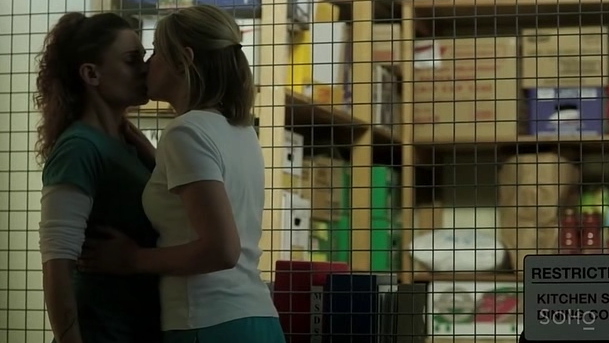 Okay, so you knew I had to save the best for last.

We’ve known for a long time that Bea doesn’t really want this anymore. Not any of it. Not anything. Bea Smith had one thing in the world to live for, and it was her daughter. When her daughter died, she lived for revenge. When she had revenge, she pulled herself together for one last battle against The Freak. And with that won, she had nothing to look forward to but a long life behind high walls, fighting endless wars that mostly end in stalemates.

Bea Smith, for as long as we have known her, has never wanted anything for herself. Until now. And it is the scariest thing she has ever felt.

She was cutting just to make herself feel something, anything. And then Allie found her. She offered her both literal and figurative salves for her wounds. She listened. She waited. This week, she stopped waiting.

When Allie comes into Bea’s cell this week, Bea is applying that salve to her scars, and Allie jokes about having a sixth sense as always to come in when Bea’s pants are down. They’re still on safe ground until Allie reaches to rub the salve (which sure looks like lube to me) onto Bea’s thigh. But that’s too much. That’s too scary. “I’m not gay,” says our Top Dog, hackles up. “I don’t care what you are,” says Allie.

But Bea keeps fighting it. Even when they’re flirting like a couple of teenagers, playing keep away, holding and breaking eye contact, leaning too close. Even when she finds herself sketching Allie’s face, with the love and care she has never devoted to another person other than her daughter.

So Allie decided to declare herself publicly for Bea, to recklessly leave Kaz’s crew. “Why?” Bea whispers. “You know why,” Allie responds.

But Bea can’t let her do that. Before Allie can do the prison equivalent of shouting “You’re a wanker, number nine,” Bea drags her to the kitchen to talk her out of it. She can’t let Allie put herself in danger for Bea. I mean, when she saw that drawing, she accepted that her heart had declared its independence from her brain. That ship had sailed. She had allowed herself to want something. But as long as she never got it, then everyone could still be safe. As long as she never took the dare of happiness, she would never have to risk heartbreak.

Fortunately for us, Allie is a romantic in the absolute best tradition, with a heart like a phoenix. And in that room (not coincidentally, in a cage within a cage), she is brave enough for the both of them. She grabs Bea’s arm. Bea trembles. “It’s cold,” says one wounded woman.

“Yeah, on opposite day,” says the other. And then.

Oh, it’s everything. I never hoped for this, never expected it, and it is all the sweeter for being a surprise. Not just sweet, it is a balm. A healing salve on my heart, and on the scars we have all sustained lately. And even though Joan is listening to the whole thing go down, and plotting a way she can use it against them, it does nothing to detract from one of the most beautiful relationships I have ever had the privilege to write about.

Which brings me back to my tears in the back yard.

Because let’s be honest: I am exhausted and you are exhausted, and we are all exhausted because this is a long year in a string of long years.

Last week I walked around my neighborhood with my sister and we tried to digest the things our friend told us. Our friend’s brother was trapped in an Orlando bathroom for hours trying to stop bleeding wounds with his bare hands. And then he left that bathroom for a world that wanted to know what he was doing in that club in the first place. He told his sister this because he had to tell someone and she told us for the same reason, and we have all been feeling like we need to say something, but we keep closing our mouths, because how can words, flimsy as paper, do anything to heal these wounds?

That is what I asked my sister on our walk. What can we do against the hate and mistrust that is killing people and making enemies of friends? And she answered: stories. Stories are how our hearts learn to accept the fundamental humanity of people very different from ourselves.

The very structure of television demands that the drama keeps on coming, that any respite is only temporary, that there is a villain waiting in the wings even during the moments of our sweetest triumphs. In that way, television provides a more accurate mirror of life than film, its most common object of comparison. In life and in TV, the hits keep right on coming ‘til the day you’re canceled.

But what I fear television creators sometimes forget in their quest to keep us on the edge of our seats is how badly we need these moments of joy. Not want: need. We come to stories to be healed. It is a need so much deeper and greater than our need to be entertained.

What I love about Wentworth fans is our shared understanding that this is a dark story set in a dark place. Alone among all the fandoms I’ve ever written for, you have never asked that this show suspends its own laws for our pleasure. But what I have come to respect about Wentworthitself is that it acknowledges this deeper need for healing. It wasn’t born doing that either; it’s a trick it’s learned in the past two seasons, and it is its saving grace.

My work writing about television on AfterEllen is the most important work I do, and at times that feels so paltry, so insufficient in a world that needs so much from all of us. But this episode of Wentworth reminded me of why the stories I write about matter. It gave me a place, even if it was just a cage within a cage, where I could briefly take strength and be healed, before going back out into the fray. I won’t ever forget it.