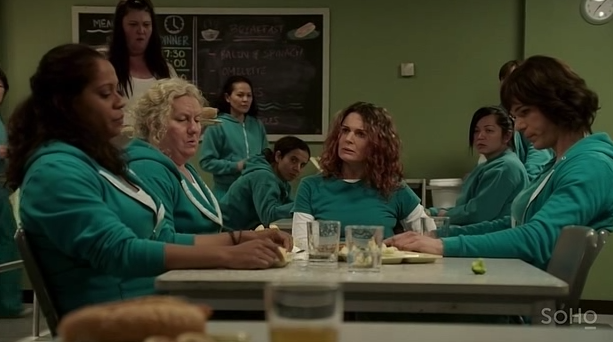 Hello, friends. It’s going to have to be a quick one this week owing both to the fact that this episode was light on our favorite star-crossed rap duo and the fact that my laptop charger has reached the end of its (all too brief) life, so I’m racing against my dying battery.

But her joy is not to last, as this week she learns that her beloved Nash has been forced to move in with his ex and their daughter, who has herself been recently diagnosed with Autism. Obviously, this living situation is not to Dor’s liking, and she is particularly hurt by Bea’s apparent lack of concern

Elsewhere on the outskirts of our drama, Liz is called in to the principal’s office by a police officer on whom she develops an immediate and severe crush. The cop asks for her help cozying up to a new inmate, who happens to be a celebrity cosmetics executive, who is accused of murder. Liz’s job is to get her to reveal where the body is hidden, and in return, the powers that be will consider moving up her release date. While Liz is generally an adherent to “snitches get stitches” (she’s probably sewn it onto a pillow), she is moved both by a desire to score an early release, help out the children of the murder victim, and rub that cop on the top of his bald head. So…a famous, sophisticated older lady comes to prison amid much hubbub, eh? Good thing this came out a few days before that other prison show or I might get my wires crossed.

But the real action this week concerns the shifting allegiances of the women. Bea, Allie, and Juice are released from the slot, which gives Bea the opportunity to give Allie the lustful/soulful/terror-stricken looks we all remember from that period of time after realizing we were into girls and before having sex with them.