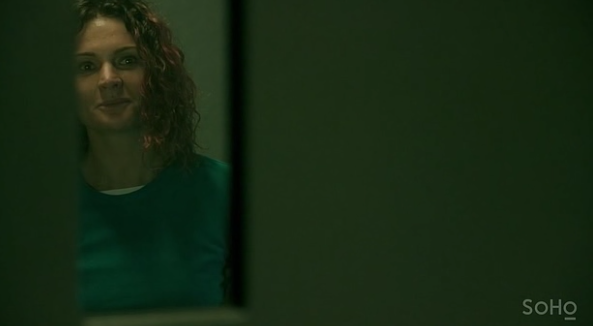 And the next day, when Allie is taken for her psych visit, they exchange a look straight out of Imagine Me & You.

But while Allie is away, Joan uses Tasha for her own purpose. She alerts Juice’s gang to the presence of fresh meat on the premises, ostensibly to keep them from going after her again. (At least this scene acknowledges that the gang-rape was real since it really would not have been worth the trauma for another one of Joan’s delusions.)

She sends the gang in after Tasha in the showers, and the poor girl is moments away from being raped. So naturally, she lunges for the panic button, as would you or I, regardless of The Rules.

Despite the fact that Tasha acted in self-defense, calling the guards is still considered unforgivable, and everyone expects Maxine to punish her. Especially Joan, who is counting on Maxine’s punishment to (FINALLY) get Kaz back into action.

But rather than torture a poor girl in service to an unjust set of rules, Maxine shows mercy. And what happens? Do the prisoners revolt at this show of weakness? No. They give Maxine their pudding. Because every so often, people can come together to change and to heal. And a show that fails to do justice to the goodness in human nature will only ever be half a drama.

Of course, this puts Joan back at square one re: Maxine. But my ultimate theory about where this is going is that Joan finds out that Maxine has stopped her hormones and attempts to make the case that she no longer belongs in a women’s prison. It definitely fits the bill for a Joan dirty trick.

But it leaves the door open for Joan, who swoops in and promises to protect her.

And finally, Allie returns to solitary, having penned a few new verses for her rap with Bea. But unfortunately, now Juice is in solitary as well, and now she knows that the Top Dog has a brand new weak spot.

I think it’s time to call it: this is Wentworth’s best season yet. See you next week.